MOSCOW — The leaders of France, Russia, Germany and Ukraine again confirmed on Wednesday their commitment to the implementation of the Minsk peace deal, including the maintenance of a ceasefire in eastern Ukraine, the French government said in a statement. 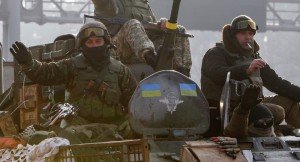 “Angela Merkel, Francois Hollande, Vladimir Putin and Petro Poroshenko have reaffirmed their commitment to a ceasefire in eastern Ukraine and to a concerted pullout without delay of heavy weapons,” the statement reads.

The four leaders had a phone conversation on Wednesday to discuss the implementation of the Minsk peace accord between Ukrainian government troops and Donbass independence supporters, which have been in a standoff since parts of two eastern regions of Donetsk and Lugansk broke away in spring 2014.

The leaders underscored the importance of following through on all the points of the Minsk agreements in 2016, including on holding local elections in the two breakaway provinces, scheduled for the start of next year. The foreign ministers of the four nations are expected to meet in early February.

In a statement, Steinmeier condemned violations of the ceasefire over the Christmas holiday. “I urgently call on all sides to strictly adhere to the ceasefire in the interests of people in the conflict areas,” he said.

Germany, with France, Russia and Ukraine, brokered the ceasefire at talks in the Belarussian capital Minsk last February as the basis for a possible lasting settlement of the crisis. More than 9,000 people have been killed in the conflict which erupted in April 2014 after a Moscow-backed president fled power in the face of street protests in Kiev.

Steinmeier pointed to progress in military de-escalation and the withdrawal of weapons by the two sides, but said important questions still had to be resolved. These include agreeing on a special law for local elections in parts of the east controlled by separatists and improving the humanitarian situation.

“Even if the situation in eastern Ukraine has disappeared from the headlines, there is no reason to sit back … The ceasefire is increasingly fragile,” he said.

He called on all sides to release prisoners and hostages, to lift limits on the registration of aid organizations in the east and to get the water supply back there.

“We must continue to work so that the local elections take place at the beginning of 2016 and the Minsk package of measures is completely implemented,” he said.

The following statement is published on the website of the president of Russia, December 30, 2015:

Vladimir Putin had a telephone conversation with Federal Chancellor of Germany Angela Merkel, President of the French Republic François Hollande and President of Ukraine Petro Poroshenko.

The leaders discussed in detail the situation in southeast Ukraine, which remains tense and volatile, in the context of implementing the Minsk Agreements reached on February 12, 2015. The decision was made to extend the Agreements for the duration of 2016 and noted the importance of the Contact Group’s further efforts for the full and comprehensive implementation of the Package of Minsk Measures.

The leaders stressed a crucial need for strict compliance with the ceasefire regime along the contact line in Donbass. This would create the preconditions for implementing tasks that would secure the advancement of a political settlement. It was agreed, in particular, to intensify discussions in the Contact Group on speedy development and adoption of the law on local elections in some districts of Donetsk and Lugansk regions.

The foreign ministers of Russia, Germany, France and Ukraine have been instructed to conduct at the beginning of 2016 a thorough appraisal of the implementation of the Minsk Agreements. Personal contacts between the four countries’ leaders will continue.

Vladimir Putin gave his assessments regarding the impact of the EU-Ukraine Association Agreement for the Russian-Ukrainian cooperation, stressing that Russia was forced to shift to the most favoured nation regime in its trade with Ukraine. The issues related to the supply of Russian gas to Ukraine were also discussed.