The White House nominee to be the next chairman of the Joint Chiefs of Staff said Thursday that Russia poses the greatest national security threat to the United States and that it would be “reasonable” to supply lethal arms to Ukrainians fighting against rebels backed by Moscow. “Russia presents the greatest threat to our national security. … If you look at their behavior, it’s nothing short of alarming,” Marine Gen. Joseph Dunford said during his confirmation hearing before the Senate Armed Services Committee. 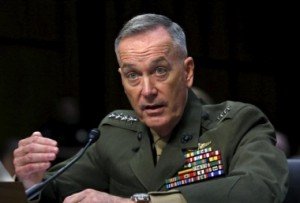 Relations between Russia and the West have sunk to post-Cold War lows after Moscow’s annexation of Ukraine’s Crimean Peninsula and its support for a pro-Russian insurgency in eastern Ukraine. The United States has responded with sanctions but so far has refrained from providing lethal arms to the Ukrainian forces.

Asked if the U.S. should provide lethal arms to Ukraine, Dunford said that from a military standpoint, it would be a “reasonable” response. “Frankly, without that kind of support, they are not going to be able to defend themselves against Russian aggression,” Dunford said.

That comment was welcomed by Sen. John McCain, chairman of the chairman. “In Europe, Vladimir Putin’s Russia continues its onslaught in Ukraine,” said McCain, R-Ariz. “But even as Russian troops and equipment execute this neo-imperial campaign to undermine Ukraine’s government and independence, the United States has refused Ukraine the weapons it needs and deserves for its defense.” . . .

Russia remains the greatest threat to the national security of the United States, a presidential nominee for the key position of chairman of the Joint Chiefs of Staff declared on Thursday. At a Senate hearing for his confirmation, Marine commandant Gen. Joseph Dunford told lawmakers that Russia could pose an “existential threat to the U.S.”

“My assessment today, senators, is that Russia presents the greatest threat to our national security,” Dunford said, echoing the voices of Pentagon officials who aired support for the provision of lethal arms to Ukraine. “If you want to talk about a nation that could pose an existential threat to the United States, I’d have to point Russia. And if you look at their behaviour, it’s nothing short of alarming,” he noted.

Diplomatic relations between Washington and Moscow plunged to their lowest when Russia supported an insurgency in eastern Ukraine, annexing the internationally known Ukrainian territory of Crimea in March 2014.

Even with the U.S. response of sanctions, President Barrack Obama has refused calls to provide lethal arms to Ukraine that will allow the country to defend itself from Russian-backed separatists.

Dunford issued the statement after the Pentagon requested for a shift of a billion dollars in the budget to provide weaponry and intelligence to confront Russian aggression in Europe and the Atlantic. His remarks, which could indicate a heightened alarm within the Pentagon about Russia’s military actions, prompted Press Secretary Josh Earnest to intervene. Earnest distanced the White House from Dunford, saying the general’s statements do not reflect “the consensus analysis of the President’s national security team.”

Since October, Dunford has served as the commandant for the US Marine Corp. He led American and NATO forces in Afghanistan from February 2013 to August 2014, USA Today reported. 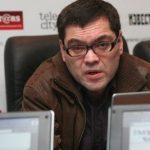 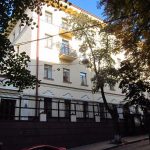 How Canada’s embassy in Ukraine was used as pawn in 2014 uprisingDigest, Feature Articles, Ukraine