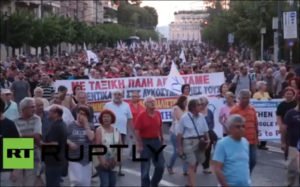 On eve of NATO war summit in Warsaw, thousands protest against the imperialist alliance in Athens on July 7, 2016

Antiwar campaigners from the U.S. and Europe slammed NATO’s buildup near Russian borders as they hosted their own conference in the Polish capital, Warsaw, where a summit of the leaders of the NATO military bloc began on Friday.

The three-day ‘Anti-NATO Summit’ brings together activists from Poland, the Czech Republic, France, the United States, Belgium, Britain and other countries under the motto: ‘No to War! No to NATO! No to militarism!’

The counter-forum will discuss a range of topics, including the growth of military spending, the expansion of nuclear arsenals, relations between NATO and the EU, the European refugee crisis and the deployment of US missile defense components on European territory.

An anti-war rally to protest the opening of new NATO bases around the globe is also scheduled to take place on Saturday as part of the event.

The leader of the Polish Stop the War Initiative, which was one of the organizers of the anti-war  summit, stressed that Warsaw has been arming itself in every way possible – increasing the number of troops and military spending – since joining NATO in 1999. “On top of that, we have plans of deploying NATO bases” in Poland, Philip Ilkovsky told Russian media.

According to Ilkovsky, the growth of military arsenals and construction of new bases would lead to “increased tensions between countries, including relations with Russia, which wouldn’t make our world a safer place. On the contrary, the threat will only increase.”

“Neither the Russians nor the Poles need the current arms race because in case of war, ordinary people will suffer, not the people who are making the decisions behind a tall fence at the NATO summit,” the activist said, as cited by TASS.

A two-day summit of the leaders of the 28-member NATO alliance, including Barack Obama, Angela Merkel and others, kicked off in the Polish capital on Friday, focusing on boosting security in the eastern part of the bloc.

Among the decisions expected to be finalized in Warsaw is the deployment of four 4,000-strong NATO battalions in Poland and the Baltic States and the creation of a multinational brigade in Romania.

Russia has repeatedly criticized the NATO buildup on its borders, stressing that it undermines security and stability in the region. Russian officials also accused NATO of deliberately portraying Russia as a threat to justify its actions and huge military spending.

Petr Ikonovich from Social Justice Movement Poland told TASS that Russia “shouldn’t be excluded” from the global security system. “It’s a vicious circle. If we aim our missiles at Russia, it will, obviously, respond in the same manner,” he said.

The participants of the anti-war summit in Warsaw consider NATO “an aggressive alliance, which bears responsibility for thousands of victims in various conflicts, as well as for the increasing flow of refugees to Europe that causes the growing hysteria nationalism. This NATO policy will eventually lead to the collapse of the European Union,” Ikonovich warned.

“We oppose the deployment of the US and NATO bases in Poland as it will lead to an increased threat to our country,” the activist said, adding that the social sector in Poland will also suffer due to the transfer of funds to military needs.

Protests were reported in Paris, Athens, Naples and elsewhere across Europe ahead of the NATO summit in Warsaw, while New York and Lisbon are among the cities where demonstrations are planned for Saturday.

“If the course on militarization remains, protests in Poland and around the globe will only increase,” Ilkovsky said.

Despite the main topic of the Warsaw Summit being to counter what NATO claims to be a Russian threat, polls reveal that an increased number of Europeans disagree with the bloc’s approach towards dealing with Moscow. Only nine per cent of Germans currently support NATO’s buildup in Eastern Europe, a fresh survey by YouGov revealed.

Two-thirds of respondents also agreed with Germany’s foreign minister, who earlier said the military alliance should abandon its “saber-rattling” on Russia’s doorstep.

In June, the Pew Research Center’s Spring 2016 Global Attitudes Survey showed that most Europeans do not view Russia as a threat, instead naming Islamic State (IS, formerly ISIS/ISIL) terror group, climate change, economic instability, cyber-attacks and the refugee influx as the main security challenges.

The only two countries that spoke in favor of boosting defense spending turned out to be Poland and the Netherlands.

Earlier this week, polls in Sweden showed a sharp drop in support for the country’s possible NATO membership, with numbers going down from 41 to 33 per cent in less than a year. 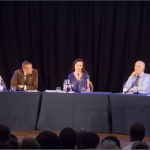 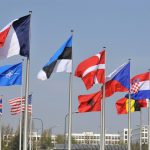