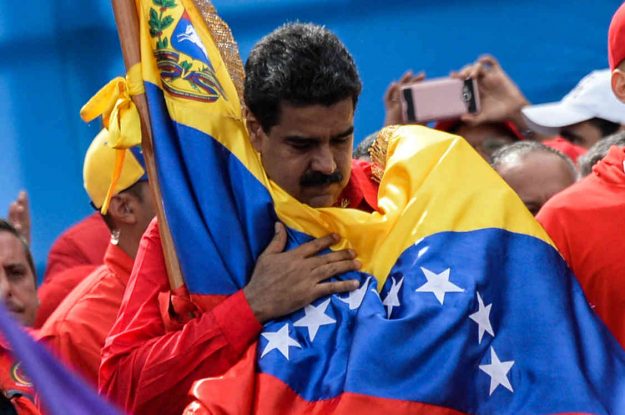 Nicolas Maduro is running for president in Venezuela’s May 20th elections, supported by his Unified Socialist Party, the Communist Party, the Homeland for All Party, Tupamaro Party, and a number of other independent left-wing groupings. He wrote the following op-ed for the Spanish newspaper El Pais.

Our democracy is unlike any other. Because all other democracies – in practically every country in the world – were created by and for the elites. In these democracies, what’s fair is what is convenient for a few. They are class-biased democracies, where the many are viewed as greater in number but lower in quality.

But not in Venezuela. In Venezuela, democracy is there for the many, and what’s fair is what’s good for all the people. And because people’s needs are undergoing constant change and renewal, ours is a revolutionary project in a permanent state of change.

For instance, 20 years ago it was quite normal in Venezuela to be born in violent obstetric conditions. None of us ever considered that at the moment of birth, it is not just the newborn’s health that is at risk, but also the health and the rights of the mother and her family. But the revolution changed and it became feminist. And everyone decided to remove sexist violence from our health system and to empower women through a national humanized childbirth program, respecting their personal project and decisions about how to give birth and rear their children.

Twenty years ago, before our Bolivarian revolution, it was normal to blame young people for their own unemployment, and it was a widespread belief that poor people were poor because they were lazy, and thus deserved to have poor health, miserable wages and no roof over their heads. But things changed when we reached government. We firmly asserted that it is not fair for people to stay poor if they are working all day long. That is why, under the Chavista administrations, we pursued full-employment policies, and why my own government has launched – through the “Carnet de la patria” (homeland card) system that digitally integrated all Venezuelan women and men – the Chamba Juvenil youth employment plan to guarantee that our young people will have access to jobs and a future.

Twenty years ago, we also said that it was unfair for home ownership to be a pipe dream for the people and a reality just for the elites, and so we created the Gran Misión Vivienda housing plan, which has enabled us to build and deliver over two million quality homes to families free of charge, and with which we plan to reach five million completed homes in just a few more years.

Starting this year, additionally, I will implement a new Social Security plan so that Venezuela can once again have the kind of education and healthcare it used to have before the onslaught of economic warfare, and which had once made us a role model for all of Latin America. This Social Security will be built on an economy that is productive, stable, sovereign and prosperous, not one subjected to the ups and downs of oil prices.

The economic revolution in this new Bolivarian period needs to be innovative and creative. We have decided to respond to the inhuman commercial blockade that the governments of the United States and Europe are subjecting us to, and which has hurt our people so much, with the creation of the world’s first ever cryptocurrency backed by reserves, the petro, whose benefits are already and immediately being invested in the people, as we have always done.

In Venezuela we use a beautiful expression to describe our friends: “Mi pana” (my buddy). There are several explanations for it, but to me it is because in this country, a friend is like a part of yourself. And that is precisely what democratic coexistence is all about to us Bolivarians. Ours is a democracy of panas, because to us, the Homeland is our pana, and other people are part of ourselves. Because to us, there can only be freedom and democracy when there are others who think differently, and a space where they can express their identity and differences. That is why we have passionately worked towards transparency, respect, and respect from others for electoral laws with a view to the upcoming May 20 elections. We are competing with four other candidates, each one of them different, but all respectful of the democratic guarantees agreement subscribed by 14 of the 18 existing political parties in Venezuela. The process will be clean and exemplary, as much or more so than the dozens of elections in which Venezuelans have participated in the last two decades.

What’s really going on is that we got tired of living in this polarized manner, and decided to turn the political violence of the guarimbas [anti-government barricaders] into a constituent power, and find one another within a Constitution made by the people and for the people. That is why I can understand the despair of the elites, who spent decades turning the people into a repository of populism, insults, detestation and barbarity. Ours, on the other hand, is a democracy that is proud to be popular, no doubt about it. It is a democracy of the people.

It is a democracy that is also Latin American, African and indigenous. Because here in Venezuela we have a rite and a founding myth. We have Simón Bolívar and Hugo Chávez, who are not in the past but who are already history. And being history, they are also our present, because they provide the meaning that guides our destiny. We are a unique democracy because we are a democracy of panas: fair, Latin American, popular and Bolivarian. In this democracy, the Other is the Homeland and the Homeland is every one of us, here and now, moving forward together. Like Pablo Neruda wrote: