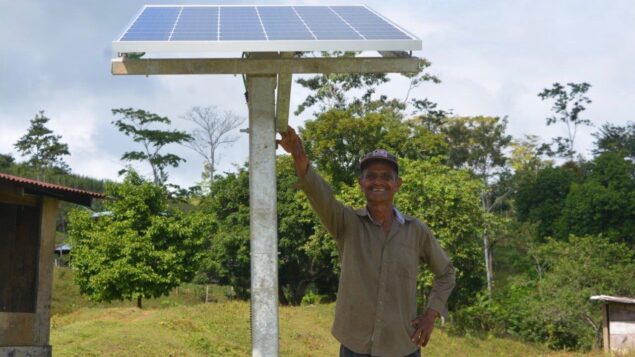 Nicaragua’s green revolution has not only seen investment in renewable sources of energy but it has also brought electrical power to areas that did not have access before. Photo: ENATREL

While large polluting countries have refused to take necessary measures to slow the climate crisis, Nicaragua, one of the most vulnerable countries to climate change, has taken impressive steps to shift to more sustainable energy.

In a report published by the International Energy Agency in April this year, it was predicted that global energy emissions will see a significant increase in 2021. It will mark the second biggest annual rise in global emissions in history, predominantly caused by increased use and investment in coal by the USA and China. Countries like Nicaragua are set to suffer the most from the climate disaster that this will exacerbate. Nicaragua is one of the most vulnerable countries in the world to climate change, despite only contributing 0.3% of global carbon emissions.

While international superpowers belatedly recognize the climate threat and simultaneously continue their reliance on dirty fossil fuels, Nicaragua is championing renewable energies. After the Sandinista government was elected to office in 2007, they pledged to switch the country from fossil fuels to renewable energies like wind, solar, and biomass. In 2007, only 25% of the energy produced and consumed in Nicaragua was renewable, but as of March 2021, this figure is now at 77.3%. This ‘green revolution’ has even been praised by the Inter-American Development Bank.

The green revolution has touched every part of the country. Solentiname, an environmentally fragile archipelago located among a lake in the south of Nicaragua, has been provided with solar energy for the first time. This means the locals can enjoy stable electricity while minimizing harm to the precious flora and fauna in their ecosystem. This project came as part of Nicaragua signing up to the International Solar Alliance, which pledges to maximize the use and access to solar energy, including improving on current technologies.

Solentiname is just one example of the many parts of Nicaragua that are benefiting from increased, renewable electrical infrastructure. With recent investments from the likes of the Central-American Bank of Economic Integration, Nicaragua is set to expand its electrical grid and achieve 99.9% electrical coverage across the country by 2025. Named the ‘Electric Transmission System Expansion Program’, it will create clean, more efficient, and reliable electricity for 10,842 user families, while bringing regular electricity to 2,542 new users.  This will allow remote communities to better integrate into society, as well as provide hundreds of new jobs.

But solar is in reality just a small part of Nicaragua’s energy matrix. The government has instead innovatively responded to the country’s prominent geographic characteristics. The energy grid makes efficient use of the country’s windy coastlines (wind energy is 14% of the matrix), but even more impressively has harnessed the power of its volcanoes. The geothermal energy from Nicaragua’s dozen volcanoes provide more than 15% of the country’s renewable energy.

Meanwhile, the biomass sector sets an example for how biofuel energy should function globally. As highlighted by the likes of Dr. Arianne Shavishi, many countries that are transitioning to biofuels as an energy source are actually importing the biomass from abroad, invalidating its low-carbon footprint. Even worse, some historic forests are being intentionally cleared to create biomass, releasing tons of carbon with it. Professor Okbazghi Yohannes of the University of Louisville suggests this is a trend driven by the global grain-trading corporations. This was never supposed to be the point of biofuels. The point was to utilise the already-abundant waste products from agriculture and forestry management. Nicaragua’s biomass is a perfect example as it’s predominantly sourced locally and much of it comes from the leftover husks of sugar cane production.

As is evident from the above, the Central American country isn’t completely eco-friendly. Recently, the government signed a $700 million deal with US-based company New Fortress Energy, who will build an off-shore natural gas plant that will be connected to the national grid. This is the first of its kind in Central America and shows Nicaragua is not quite ready to commit to an entirely renewable energy matrix in the near future. However, the FSLN government’s rapid progress since the days of neoliberalism are still incredibly laudable and show a clear commitment to the planet.

Ahead of 2021’s COP26 conference, the world’s largest polluters are sending contradictory messages about the transition to renewable energy. While on one hand the G7 countries speak about keeping below 1.5 degrees Celsius of warming—almost impossible at this point anyway—some of its major players like the UK are still proposing new coal mines. Conversely, Nicaragua’s transition to green energy has been well under way for over a decade. Despite being one the most impoverished countries in the Western Hemisphere, Nicaragua is an excellent illustration for the world of what can be achieved when a government actually commits to renewable energies. Sandinismo is truly a green revolution.

This article was written in collaboration with the Nicaragua Solidarity Campaign UK. In November 2021, Nicaraguans will vote in their national elections. The USA has already begun a campaign to try to oust the incumbent socialist FLSN government at the voting booth. This article is part of a year-long series that seeks to present the truth of Nicaragua under the Sandinista government.

Rohan Rice is a writer, photographer, and translator from London. You can find his work at:https://rohanjrice.wordpress.com/