Mainstream news outlets in Canada and around the world have dampened or obfuscated news of the marches of millions of Russian citizens across the country on May 9 to commemorate Victory Day. 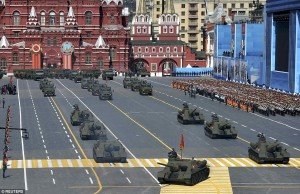 News reports of the size of the citizen march and commemoration in Moscow, termed the March of the Immortal Regiment, vary from 250,000 to 500,000 people. A large military march took place on Red Square in Moscow earlier the same day.

In Canada, the state-financed Canadian Broadcasting Corporation reports in its radio news broadcasts on May 10  that a “huge military parade” took place in Moscow. It makes no reference to the citizen march and commemoration.

The CBC News website reporting of the entire day of May 9 in Moscow consists of a small photo gallery of the military parade. There is no accompanying article. Meanwhile, the website features multiple articles and photo stories of Victory in Europe events in western Europe. It reports, in particular, on the campaign in Holland in which the Canadian army took part in 1945 to drive the German Nazi army out of that country. That campaign occured well after the war’s eventual outcome in Europe had been decided in the titanic battles waged by the armies of the Soviet Union in eastern Europe.

The national, evening television broadcast of CBC on May 9 reported as its lead item for six minutes on a ceremony in Holland to welcome and commemorate Canadian soldiers. It then followed with a brief report on the citizen march in Moscow.

Canada’s largest-circulation daily newspaper, the Toronto Star, obfuscates the news. Its wireservce news story from the Washington Post on May 10 writes, “Russia’s vast celebrations Saturday to mark the 70th anniversary of the defeat of Nazi Germany had nearly everything: 16,000 goose-stepping soldiers, medal-bedecked veterans, and families carrying photographs of those who died long ago.” After reporting on the boycott of Victory Day events by Western leaders, the article writes snidely, “As if to bolster the greatly diminished ranks of surviving veterans, thousands of people marched down a central Moscow boulevard after the parade on Saturday with photos of the now-gone veterans in their families.”

The Globe and Mail daily does not publish a Sunday edition. Its website publishes an Associated Press article which reports the citizen march in Moscow, saying 300,000 people “walked” through the streets carrying portraits of their war veteran family members. The article highlights the “cold shoulder” given to the day’s events in Moscow by Western leaders.

Germany’s state broadcaster Deutsche Welle makes no mention of the Immortal Regiment march in its English-language report from Moscow on May 9.

A photo gallery of the May 9 military parade on Red Square is published here in the UK Telegraph. Full coverage of the March of the Immortal Regiment is on RT.com, amoung other outlets. Among the world leaders attending was the president of China, Xi Jinping.