Donald Trump’s first year in office and the illusion of choice in the U.S. two-party duopoly, by Neil Clark, published in the ‘Op-Edge’ feature of RT.com, Jan 19, 2018  The striking thing about Trump’s first twelve months compared to the Obama administration is not how different his foreign policies have been, but how similar… 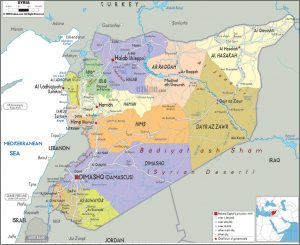 [It’s a mystery why Al-Monitor would believe that that Russia will accept a military intervention by NATO-member Turkey against the Kurdish population in the Afrin province of northwest Syria. Russia has long advocated a federal constitution for Syria which would recognize certain autonomous political and social rights for Syria’s Kurdish population. Moreover, Russian Foreign Minister Sergei Lavrov spoke to reporters at the United Nations in New York on January 19 about the double game which the United States is playing while professing support to the Kurds. He said, “It’s a fact that US forces are seriously involved in creating alternative government bodies on vast part of the Syrian territory. And this, of course, absolutely contradicts their own obligations, which they committed to on numerous occasions, including at the UN Security Council, on maintaining the sovereignty and the territorial integrity of Syria.”

Knot over Afrin region in northwest Syria: How the battle for a small Kurdish enclave could be the death knell for U.S.-Turkey ties, lengthy news analysis by RT.com, Jan 18, 2018  This week, the countdown began for Afrin, a Kurdish-held enclave in the north of Syria which is feverously preparing for a major Turkish offensive…

‘We don’t consider you a legitimate journalist’: How I got blacklisted by the Pentagon’s Africa Command, by Nick Turse, The Intercept, Jan 13, 2018

The Guardian, White Helmets, and silenced comment, by Tim Hayward (University of Edinburgh), published on his website, Jan 12, 2018