In a backhand way, The New York Times admits that the U.S.-backed “moderate” rebels in east Aleppo are fighting alongside Al Qaeda jihadists, an almost casual admission of this long-obscured reality, writes Robert Parry. Exclusive to Consortium News. 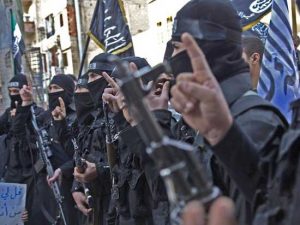 As much as The New York Times and the mainstream U.S. media have become propaganda outlets on most foreign policy issues, like the one-sided coverage of the bloody Syrian war, sometimes the truth seeps through in on-the-ground reporting by correspondents, even ones who usually are pushing the “propo”.

Such was the case with Anne Barnard’s new reporting from inside west Aleppo, the major portion of the city which is in government hands and copes with regular terror rocket and mortar attacks from rebel-held east Aleppo where Al Qaeda militants and U.S.-armed-and-funded “moderate” rebels fight side-by-side.

Almost in passing, Barnard’s article on November 6 acknowledged the rarely admitted reality of the Al Qaeda/”moderate” rebel collaboration, which puts the United States into a de facto alliance with Al Qaeda terrorists and their jihadist allies, fighting under banners such as Nusra Front (recently renamed Syria Conquest Front) and Ahrar al-Sham.

Barnard also finally puts the blame for preventing civilians in east Aleppo from escaping the fighting on a rebel policy of keeping them in harm’s way rather than letting them transit through “humanitarian corridors” to safety. Some of her earlier pro-rebel accounts suggested that it wasn’t clear who was stopping movement of civilians through those corridors.

However, on Sunday, she reported: “We had arrived at a critical moment, as Russia said there was only one day left to pass through a corridor it had provided for people to escape eastern Aleppo before the rebel side was flattened, a corridor through which precious few had passed. The government says rebels are preventing civilians from leaving. Rebels refuse any evacuation without international supervision and a broader deal to deliver humanitarian aid.”

Granted, you still have to read between the lines, but at least there is the acknowledgement that rebels are refusing civilian evacuations under the current conditions. How that is different from Islamic State terrorists in Mosul, Iraq, preventing departures from their areas – a practice which the Times and other U.S. outlets condemn as using women and children as “human shields” – isn’t addressed. But Barnard’s crimped admission is at least a start.

Barnard then writes: “Instead [of allowing civilians to move through the humanitarian corridors], they [the rebels] are trying to break the siege, with Qaeda-linked groups and those backed by the United States working together — the opposite of what Russia has demanded.”

Again, that isn’t the clearest description of the situation, which is stunning enough that one might have expected it in the lede rather than buried deep inside the story, but it is significant that the Times is recognizing that Al Qaeda and the U.S.-backed “moderates” are “working together” and that Russia opposes that collaboration.

She also noted that “Three Qaeda-linked suicide bombers attacked a military position with explosive-packed personnel carriers on Thursday, military officials said, and mortar fire was raining on neighborhoods that until now had been relatively safe. It was among the most intense rounds in four years of rebel shelling that officials say has killed 11,000 civilians.”

While she then throws in a caveat about the impossibility of verifying the numbers, the acknowledgement that the U.S.-backed “moderate” rebels and their Al Qaeda comrades have been shelling civilians in west Aleppo is significant, too. Before this, all the American people heard was the other side, from rebel-held east Aleppo, about the human suffering there, often conveyed by “activists” with video cameras who have depicted the conflict as simply the willful killing of children by the evil Syrian government and the even more evil Russians.

With the admission of rebel terror attacks on civilians in west Aleppo, the picture finally is put into more balance. The Al Qaeda and U.S.-backed rebels have been killing thousands of civilians in government-controlled areas and the Syrian military and its Russian allies have struck back only to be condemned for committing “war crimes.”

Though the human toll in both sides of Aleppo is tragic, we have seen comparable situations before – in which the U.S. government has supported, supplied and encouraged governments to mount fierce offensives to silence rockets or mortars fired by rebels toward civilian areas.

For instance, senior U.S. government officials, including President Barack Obama and Democratic presidential nominee Hillary Clinton, have defended Israel’s right to defend itself from rockets fired from inside Gaza even though those missiles rarely kill anyone. Yet, Israel is allowed to bomb the near-defenseless people of Gaza at will, killing thousands including the four little boys blown apart in July 2014 while playing on a beach during the last round of what the Israelis call “mowing the grass.”

In the context of those deaths, U.S. Ambassador to the United Nations Samantha Power, who has built her career as a supposed humanitarian advocating a “responsibility to protect” civilians, laid the blame not on the Israeli military but on fighters in Gaza who had fired rockets that rarely hit anything besides sand.

But that universal right apparently does not extend to Syria where U.S.-supplied rockets are fired into civilian neighborhoods of west Aleppo. In that case, Power and other U.S. officials apply an entirely different set of standards. Any Syrian or Russian destruction of east Aleppo with the goal of suppressing that rocket fire becomes a “war crime”.

Perhaps it’s expected that the U.S. government, like other governments, will engage in hypocrisy regarding affairs of state: one set of rules for U.S. allies and another for countries marked for U.S. “regime change.” Statements by supposed “humanitarians” – such as Samantha Power, “Ms. R2P” – are no exception.

But double standards are even more distasteful when they come from allegedly “objective” journalists such as those who work at The New York Times, The Washington Post and other prestige American news outlets. When they take the “U.S. side” in a dispute and become crude propagandists, they encourage the kind of misguided “group thinks” that led to the criminal Iraq War and other disastrous “regime change” projects over the past two decades.

Yet, that is what we normally see. A thoughtful reader can’t peruse the international reporting of the U.S. mainstream media without realizing that it is corrupted by propaganda from both government officials and from U.S.-funded operations, often disguised as “human rights activists” or “citizen journalists” whose supposed independence makes their “propo” even more effective.

So, it’s worth noting those rare occasions when The New York Times and the rest of the MSM let some of the reality peek through. When evaluating the latest plans from Hillary Clinton and other interventionists to expand the U.S. military intervention in Syria – via prettily named “safe zones” and “no-fly zones” – the American people should realize that they are being asked to come to the aid of Al Qaeda.

[For more on this topic, see Consortiumnews.com’s ‘The de facto U.S./Al Qaeda alliance‘.]

Investigative reporter Robert Parry broke many of the Iran-Contra stories for The Associated Press and Newsweek in the 1980s. You can buy his latest book, America’s Stolen Narrative, either in print here or as an e-book (from Amazon and barnesandnoble.com.I

Introductory note by New Cold War.org: This study posted at the weblink is an eight-page academic study of local governing councils in the ‘liberated’ areas of southern Syria. The study reveals that the local  governing councils are completely subordinated to the “opposition military groups” that are the real powers in the situation. The study to be a rare and interesting insight into the governance of the “opposition” zones of Syria.

The crisis in Syria raises questions about how Syrians live their lives amidst the ongoing war, particularly in the “liberated zones” which are no longer under the control of the Assad regime. Bashar Assad’s forces have imposed a strict siege on these zones and, together with Russian and Iranian forces, have subjected them to heavy bombing. The war has damaged the economy, causing thousands of families and individuals to lose their sources of income and live in deteriorating conditions. It has thus forced many people to change their economic activities in order to provide for their families.

In an attempt to take control of their lives and build some stability in incredibly difficult conditions, residents in these liberated zones have formed local councils. In some zones, they have indeed succeeded in forming actively independent local councils, while in other areas the local councils have limited freedom to perform their duties. In all cases, local councils operate like “small governments” in managing the affairs of their region. They work with development and service institutions to lessen the chaos of war and provide support in the absence of state institutions. This raises questions about the challenges that local councils face and offers an opportunity to assess their performance in a war context. For this purpose, this paper presents case studies of local administration in Douma, Qalaat al-Madiq and Tasil, which represent three different regions of the country. [End introduction.]

… Most councils, including those described above, have to deal with interference from the opposition military groups that control their area. Judicial courts, for example, which fall within the councils’ purview, are often subject to change. Some courts which started out as independent and secular have become sharia courts as a result of pressure from military groups. Military groups also undermine the work of the judiciary, as each of them has their own sharia courts that do not recognize any outside authority. Furthermore, local councils have authority only over civilians; they have no power over combatants operating within military groups. This has significantly weakened the councils and encouraged the spread of chaos. It could be circumvented with a separation of power between the military, the judicial and the administrative work of the councils…