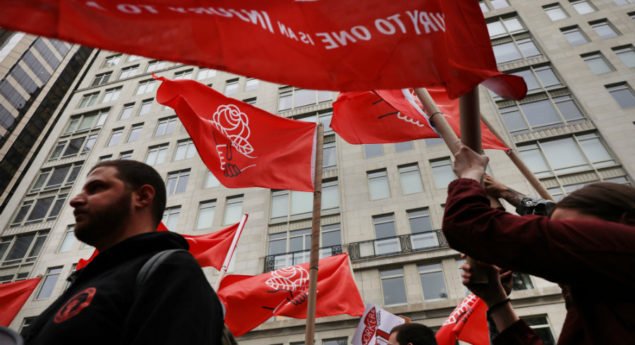 The New York City chapter of the Democratic Socialists of America is under attack from local Democratic lawmakers. The charge is a favorite one for liberals to lob against the Left lately: antisemitism.

The New York City chapter of the Democratic Socialists of America is under attack from local Democratic lawmakers. The charge is a favorite one for liberals to lob against the Left lately: antisemitism.

New York state Democrats have organized a denunciation of the group’s questionnaire for city council candidates seeking DSA backing, asking if they would refrain from traveling to Israel while in office and whether they support the Boycott, Divestment, and Sanctions movement.

The questionnaire reads, “Do you pledge not to travel to Israel if elected to City Council in solidarity with Palestinians living under occupation,” and, “Do you support the Boycott, Divestment, and Sanctions movement? If not, why.” In response, state Democratic leaders went apoplectic.

A letter signed by fifty-three legislators said that DSA’s question “is offensive, antisemitic, and dangerous. […] No political organization that embeds antisemitism into its platform should be welcome in the halls of our legislature.” Sen. Brad Hoylman was quoted as saying, “This is repugnant and should be withdrawn.” Former city councilman David Greenfield called it “Antisemitism. Plain and simple.”

NYC-DSA’s question didn’t come out of nowhere — trips to Israel are common even for state politicians. Governor Andrew Cuomo led a trip to Israel in 2014, and City Comptroller Scott Stringer led one in 2016 that included the head of one of the city’s largest public-sector unions.

Critics have often seen these junkets as propaganda tours, a way for the government of Israel to instill a positive (and often victimized) image of the nation to politicians at all levels of government, not just Congress and the White House. New York City is central to the Jewish political world, so the Israel Lobby doesn’t underestimate the importance of its local politicians and activists.

The backlash isn’t a surprise, either. All of New York City DSA’s state legislative candidates won their races this year, including incumbent Senator Julia Salazar, and DSA-backed congressional candidate Jamaal Bowman, who ousted pro-Israel stalwart Rep. Eliot Engel. All four members of the “squad” in Congress easily won their primaries, despite well-funded challenges from the center (and despite, unsurprisingly, facing spurious claims of antisemitism of their own.

We can expect more pro-Israel money to fund centrist challengers and more breathless cries in the press about “left antisemitism.” But DSA activists shouldn’t be scared. The fiasco is a sign of the political establishment’s weakness — both in the face of the DSA’s success at the ballot box, and in the shifting tides in American opinion on Israel in recent years in support of Palestinians, especially among young American Jews.

Attacks against DSA’s success have taken a number of forms over the years, of which antisemitism is only the latest. One common attack is to denounce DSA candidates as gentrification agents, framing socialism as something only appealing to white, well-educated youngsters — even though the DSA’s winning candidates in the city are black, Latina, and South Asian, winning contests all over the city while running on explicitly anti-gentrification platforms.

The charge is also meant to deflect the clear class divide between mainstream Democrats and DSA candidates: the latter do not accept donations from real estate, the business sector that is centrally responsible for driving up housing prices.

These attacks haven’t worked at holding DSA back, so centrist Democrats are reaching for a new weapon: Israel. Like the similar, absurd attacks in the UK on Jeremy Corbyn and the Labour Party, centrist Democrats would have liked to roll these attacks out against Sen. Bernie Sanders’s presidential campaign (and even floated a few trial balloons), but there were some obvious barriers to that strategy. Post-Bernie, they’re going all-in on it.

Unfortunately for DSA’s attackers,  pro-Israel attacks aren’t the death blow they were once thought to be. The pro-Israel publication Tablet devoted an enormous amount of editorial resources to dive into New York State Senator Julia Salazar’s record of support for Palestinians when she was still an insurgent candidate in 2018. She won her race and, recently, her primary.

Jessica Ramos also drew attacks when she expressed sympathy with Palestinians when she was a Democratic Party official (she’s a progressive, but not backed by DSA). She was elected to the state senate along with Salazar anyway, and also won her recent primary.

There’s a good reason for this change. The average American voter, especially in local elections, isn’t thinking first and foremost about Israel. In fact, DSA’s electoral success has centered on economic inequality, in particular the high cost of housing, a bread-and-butter issue that frames the real estate industry’s influencein local politics as a major corrupting force. Rather than try to convince voters to turn against DSA’s economic message, the organization’s political opponents would rather change the subject to something that has no real immediate impact in a city council or state legislative race.

While the attacks aren’t landing, DSA members should probably be prepared for more of them. “For the past few years, national media coverage of DSA largely fell into three categories: ridicule, neutral, and human interest,” David Duhalde, vice chair of the DSA Fund, said in an email. “As the socialist organization has gained influence, especially at municipal levels, the news will flame attacks on DSA that serve the agendas of the powerful. This is a natural progression for left-wing groups as they grow stronger, and one that we need to be ready for. History shows the news stories will only get more unfair and more hostile.”

Still, the attacks on DSA from the Democrats and in the press are still painful to hear. For one thing, it’s an insult to Jewish members like me. We often fear very real and violent right-wing antisemitism; to hear that our support for Palestinian self-determination is based in self-hatred is salt in the wound.

But such attacks aren’t going to end anytime soon. New York City’s traditional power brokers are seeing their power undermined by recent DSA wins. They’re flailing, and they think the old charge that criticism of Israel makes DSA hostile to Jews will get them out of this mess. It won’t work.