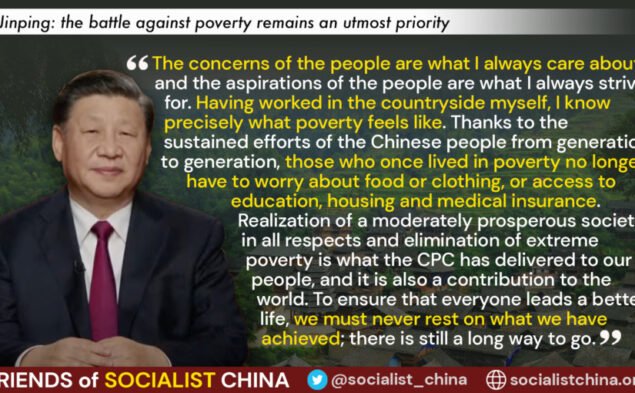 We reprint here President Xi Jinping’s New Year Address for 2022 delivered from Beijing on New Year’s Eve. In direct and vivid language, the Chinese President succinctly covers a broad canvas ranging from nature to sports to space exploration. He reflects on the great achievements of an extraordinary year that saw the centenary of the founding of the Communist Party of China and the adoption of a major resolution on party history:

Standing on the Tian’anmen Rostrum, one could only marvel at the extraordinary journey traveled by this major Party, a journey of Chinese Communists leading the Chinese people, in their hundreds of millions, in an unyielding struggle against all obstacles and challenges, and scoring spectacular, epoch-making achievements over the past century.

China’s historic victory over extreme poverty was naturally another major theme. As a seasoned Marxist, in his Address, Comrade Xi integrated the general with the particular on the basis of the mass line:

Reviewing his country’s signal contribution to the global battle against Covid-19, the Chinese President noted:

Only through unity, solidarity and cooperation can countries around the world write a new chapter in building a community with a shared future for mankind.

Embedded below the text is CGTN’s video version of the speech, with English subtitles.

My greetings to you all. The year 2022 is approaching. From Beijing, I extend New Year wishes to all of you!

The past year has been a year of exceptional significance. We have lived through landmark events in the history of our Party and our country. At the historical convergence of the Two Centenary Goals, we have set out on a new journey of building a modern socialist country in all respects and are making confident strides on the path toward the great rejuvenation of the Chinese nation.

From the beginning to the end of the year, the Chinese people have been hard at work in the fields, enterprises, communities, schools, hospitals, barracks and research institutes, among other places. Throughout the year, we have put in our efforts, contributed our part, and received much in return. In the passage of time, we have seen and experienced a resilient and dynamic China, a country with its amicable and respectable people, a country developing rapidly with each passing day, and a country making continual progress in all its undertakings.

On July 1, we solemnly celebrated the 100th anniversary of the founding of the Communist Party of China (CPC). Standing on the Tian’anmen Rostrum, one could only marvel at the extraordinary journey traveled by this major Party, a journey of Chinese Communists leading the Chinese people, in their hundreds of millions, in an unyielding struggle against all obstacles and challenges, and scoring spectacular, epoch-making achievements over the past century. To accomplish our great mission, we must always remain true to our original aspiration. Only through vigorous and determined endeavor can we fulfill our responsibility to history, prove worthy of our times and live up to people’s expectations.

The sixth plenary session of the 19th CPC Central Committee has adopted the Party’s third resolution on historical issues. The CPC’s 100-year achievements provide a source of motivation and its 100-year experience a wellspring of inspiration. I have referred to Chairman Mao’s conversation with Mr. Huang Yanpei at his cave-dwelling in Yan’an, and the importance of carrying out bold self-revolution so as to gain the historical initiative. To realize the great rejuvenation of the Chinese nation will be no easy task like a walk in the park; it will not happen overnight, or through sheer fanfare. We must always keep a long-term perspective, remain mindful of potential risks, maintain strategic focus and determination, and “attain to the broad and great while addressing the delicate and minute”.

Our country, big as it is, also has its list of priorities. The myriad of things we attend to all boil down to matters concerning every household. Through my field trips to different places, I have seen and heard a lot of things which I find very inspiring and rewarding. Every time I visit people in their homes, I would ask if they have any more difficulties, and I would remember everything my folks have to share with me.

The concerns of the people are what I always care about, and the aspirations of the people are what I always strive for. Having worked in the countryside myself, I know precisely what poverty feels like. Thanks to the sustained efforts of the Chinese people from generation to generation, those who once lived in poverty no longer have to worry about food or clothing, or access to education, housing and medical insurance. Realization of a moderately prosperous society in all respects and elimination of extreme poverty is what the CPC has delivered to our people, and it is also a contribution to the world. To ensure that everyone leads a better life, we must never rest on what we have achieved, and there is still a long way to go.

A Yellow River well harnessed is a millennia-long aspiration of the Chinese people. Over the past few years, I have visited all nine provinces or autonomous regions on the upper, middle and lower streams of the Yellow River. From the Yellow River and the Yangtze River, two “mother rivers” of the Chinese nation, to the limpid Qinghai Lake and the mighty Yarlung Zangbo River; from the South-North Water Diversion, known as a project of the century, to the Saihanba forest, shown as a patch of green on the map; from the northward trek and homecoming of elephants in Yunnan Province, to the migration and return of Tibetan antelopes — all these remind us that “If we do not fail Nature, Nature shall never fail us”.

This year has also recorded many memorable Chinese voices, Chinese moments and Chinese stories: youthful vows of “pledging to the Party to make my country strong”; affectionate expression of “pure, true love saved for the motherland”; the Zhurong rover probing Mars, the Xihe satellite chasing the sun, and the Tianhe space station core module traveling among the stars; athletes outdoing themselves to excel on the sports field; the whole nation staying united in solid COVID-19 response; people in disaster-stricken areas standing together to rebuild their homes; members of the People’s Liberation Army and Armed Police devoted to building a strong military and protecting our country. The hard work and dedication of countless unsung heroes have all added to the great momentum of China’s march forward in the new era.

The prosperity and stability of Hong Kong and Macao is always close to the heart of the motherland. Only with unity and concerted efforts can we ensure sound implementation of One Country, Two Systems in the long run. The complete reunification of our motherland is an aspiration shared by people on both sides of the Taiwan Strait. I sincerely hope that all the sons and daughters of the Chinese nation will join forces to create a brighter future for our nation.

In my phone calls and virtual meetings with foreign leaders and heads of international organizations, I have heard many times plaudits for China’s fight against COVID-19 and contribution to the global COVID response. To date, China has provided two billion doses of COVID-19 vaccines to more than 120 countries and international organizations. Only through unity, solidarity and cooperation can countries around the world write a new chapter in building a community with a shared future for mankind.

In just over a month, the Beijing Olympic and Paralympic Winter Games will open. Greater public involvement in winter sports also contributes to the Olympic Movement. We will spare no effort to present a great Games to the world. The world is turning its eyes to China, and China is ready.

The bell is about to ring for the New Year. As we speak, three Chinese astronauts are on duty in outer space; our fellow compatriots overseas are still working very hard; our people posted to diplomatic missions and businesses abroad as well as overseas Chinese students are bravely holding on; and our numerous dream-chasers are keeping up their good work. I salute all your great efforts, and extend to you best wishes for the New Year.

Let us all work together for a shared future. May our country enjoy prosperity and our people live in peace and harmony!