‘The proposals would drastically cut back the remnants of the Soviet cradle-to-grave welfare state… Among the most startling proposals are to cut obligatory schooling from 11 to 9 years.’

In order to put the country back on a sound financial footing, Ukraine’s finance ministry is proposing sweeping cuts, from cutting the years of mandatory schooling, to firing two-thirds of MPs, to hiking the pension age. 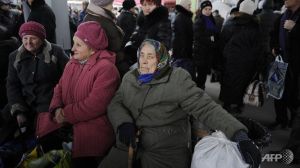 Elderly people in Donetsk. Ukraine gov’t proposes to raise pension age for women from 57 to 65

According to leaked documents drawn up by the finance ministry, the new government, voted in on December 2, is readying sweeping reform of the entire budget sector. The 120 pages of proposals outline changes to the constitution and legislation to reduce the state’s spending obligations to the order of 496 billion hryvnia (US$31.3bn), much of which remains in fact chronically unfunded. The proposals would drastically cut back the remnants of the Soviet cradle-to-grave welfare state.

Among the most startling proposals are to reduce the number of MPs from 450 to 150, reduce obligatory schooling from 11 to 9 years, and abolish the constitutional guarantees of free education and medicine, as well as abolishing a constitutional norm prohibiting closure of existing institutions (such as schools and hospitals).

Perhaps most controversially, the finance ministry is proposing to raise the pension age for both men and women to 65, from currently 57 for women and 62 for men, canceling pension indexation for inflation, and slashing all travel benefits (such as free travel for pensioners).

New Finance Minister Natalie Jaresko, a U.S.-born investment banker who was a surprise appointment to the post on December 2, said that it was “too early to talk about concrete figures,” but that it would be necessary to “review the existing benefits provided to large groups of the population in favour of aid targeted at people who really need it”.

Jaresko also in the interview denied reports that Ukraine was close to default. “We are not in a state of default and also not in pre-default state. This question is not even being considered in the government. But no one is hiding that the situation is very serious – Ukraine needs urgent stabilisation of the financial system in particular the banking sector,” she said.

See also:
Who Will Foot the Bill in Ukraine?, By Jamila Trindle, Foreign Policy, December 12, 2014
‘The West proves willing to help Ukraine by hurting Russia with sanctions, but little aid is forthcoming for Ukraine as its government faces a shortfall.’ 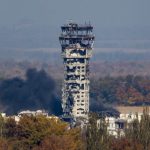