Barely half of voters in NATO states would support a military response to an attack on an alliance member, according to a ten-country survey that highlights divisions on how to respond to Russia and the Ukraine crisis. 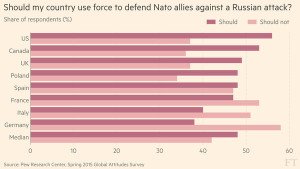 Yet the poll, based on more than 11,000 interviews in 10 countries and conducted by the Pew Research Centre, showed the limits of European public tolerance for an escalation in military support for Ukraine, or indeed for standing by the NATO commitment to mutual defence.

Fewer than half of respondents in the UK, Poland, Spain, France, Italy and Germany would back using force to help defend a NATO ally that was under military threat from Russia . . .

Particularly worrying for western policy makers is a sharp decline in Ukrainian support for the Kiev government over the past year, a trend reflected in local opinion polls. Only one third of Ukrainian respondents think the Kiev government is having a positive influence, a 15 point decline over the past year. This shift is particularly marked in western Ukraine, where those seeing the government as a bad influence has increased from 28 to 54 per cent.

President Petro Poroshenko’s approval ratings are at 22 per cent on the economy, and 28 per cent over the military conflict in eastern Ukraine, according to the Pew report . . .

See full article and accompanying charts at the weblink to the original story, above.

Ukrainian edition of Forbes laments ‘Only 13.5 per cent of Ukrainians support capitalism’

From Facebook page of Dmitry Kovalevich, June 11, 2015, citing an story in the Ukrainian edition of Forbes, here

You can ban Communist ideology in a country, but it is impossible to implant progressive market views to its citizens. As reveals a recent survey (by the National Academy of Sciences of Ukraine and Institute of Sociology in the framework of the project ‘Ukrainian society: monitoring of social changes’), the majority of Ukrainian citizens continues to see the state as an effective owner of  farmland and large industrial enterprises, and Ukrainians still don’t trust their money to banks.

After 24 years of building a market economy in Ukraine, almost half of the respondents have not formed clearly their own economic views. In commitment to capitalism confessed only 13.5 per cent of respondents; socialist views are close to 15.6 per cent. Over one quarter (25.5 per cent) of respondents support both (!) ideologies – socialism, and capitalism, not seeing any contradictions in it. Twenty four per cent back neither ideology.

Interestingly, when compared with data of 1994 survey, the percentage of the undecideds has not changed significantly: 23.7 per cent supported that time both ideologies while 20 per cent did not support any of them.