Mythology about the rightness of dropping two atomic bombs on Japan is relevant to today’s “modernization” of the U.S. nuclear arsenal and the revving up of a new Cold War with Russia, says ex-Pentagon military analyst Chuck Spinney. 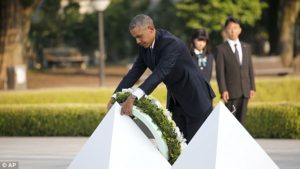 Barak Obama lays wreath in Hroshima, Japan on May 27, 2015. No apology but lots of crocodile tears for 1945 nuclear bomb (AP)

With the passage of time, the decision to drop the atomic bombs on Hiroshima (a uranium bomb) and Nagasaki (a plutonium bomb) in August of 1945 has become more controversial among historians but not in the public mind. Was the destruction of these two low priority targets necessary to end the war with the Japan?

In 1945 and thereafter, beginning with the Truman Administration, politicians and milcrats convinced the public that bombing Hiroshima and Nagasaki ended the war quickly and thereby saved American and Japanese lives. Against the background of the brutality and racism of the Pacific War — and especially the just completed battles of Okinawa and Iwo Jima, and the overwhelming psychological effects of the Kamikazes — this justification was easy to believe by those troops designated for the invasion of Japan as well as by a public anxious to end the war. 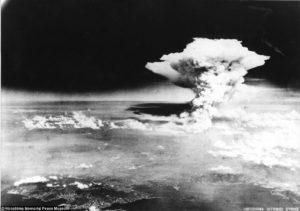 It is hard to overestimate the immediate and lasting appeal of the government’s line to people of all political persuasions: One of my dearest friends, for example, was an anti-tank gunner in the 95th Infantry Division during WWII. While in Germany in 1945, he was notified that he would be redeploying to the Pacific for the invasion of Japan.

My friend was an extreme liberal with a WWII enlisted GI’s contempt for the conduct of war; he believed the military leadership was incompetent; and that carried over to his vehement opposition to the Vietnam War. But 50 years later he still vociferously defended the decision to drop the atomic bombs. His reasoning was simple and heartfelt and honest: he had enough of fighting the Germans and wanted to go home and be done with the madness.

And this belief has lingered through the years, largely unquestioned. But the story of the decision to drop the bomb is far more complicated than this simple argument suggests. One of the world’s leading historians of President Harry Truman’s decision to drop the bomb, Gar Alperovitz, recently sat down with journalist Andrew Cockburn to discuss these complexities (weblink below: ‘Unjust cause: Historian Gar Alperovitz on the decision to bomb Hiroshima and Nagasaki’, interview by Andrew Cockburn, Harpers Magazine, May 25, 2016).

The question addressed by Alperovitz and Cockburn is more than an idle historical curiosity. Alperovitz hints as much in the last pregnant paragraph of his interview. President Obama’s administration is planting the seed money for an across-the-board-modernization of nuclear weapons, delivery systems, and support systems that will cost at least a trillion dollars (more likely $2 trillion to $3 trillion, IMO) over the next 15-30 years.

While its details are shrouded in secrecy, public information is oozing out (e.g. see this item from Bulletin of the Atomic Scientists). Present information now suggests this program includes:

Given the highly evolved nature of the domestic politics driving defense spending (i.e., the domestic operations of the Military-Industrial-Congressional Complex (I described this in “The Domestic Roots of Perpetual War”), history shows the golden cornucopia of this nuc “bow wave” or programs will quickly evolve into an unstoppable tsunami of front-loaded and politically engineered contracts and subcontracts that will grow over time to overwhelm and paralyze future presidents and Congresses for the next 20-30 years.

This kind of budget time bomb has happened at least twice before in the non-nuclear part of the defense budget: The first began when the Nixon-Ford Administration planted the seeds of defense budget hysteria by starting a bow wave of new modernization programs, financed in the short term by readiness and force structure reductions in early-to-mid 1970s. These reductions led to budget pressures that exploded in the late 1970s and 1980s when President Jimmy Carter began growing the defense budget and President Ronald Reagan accelerated that growth.

The game repeated itself in the late 1980s through the mid-1990s, when Presidents George H.W. Bush and Bill Clinton planted the seeds for future budget growth that would metastasize in the late 1990s. That bow wave was subsequently power-boosted and masked somewhat by hysteria accompanying 9/11, but it used the same formula of cutting readiness and force structure in the short term to finance the planting of the bow wave of modernization programs.

And now, history is repeating itself for a third time. This can be seen in the spate of recent hysterical and misbegotten reports (e.g., typical example) about how the relatively modest budget cutbacks from 2010 in the Pentagon’s “base budget” have caused today’s modernization crises, readiness shortfalls, etc.

Now add the full-scale nuclear tsunami to this limited description of the Obama bow wave and the pressure to grow future budgets justified by a new cold war will become unstoppable.

The only way such a modernization program can be justified is to concoct some kind of 21st century nuclear warfighting scenario and to use the rubric of a new Cold War against a nuclear-armed competitor — read Russia or China or both — to terrorize the public into paying the bill.

Which brings us back to the logic of bombing Hiroshima and Nagasaki. Below is Cockburn’s short but incisive interview with Alperovitz. (Caveat: Andrew Cockburn is a close friend of 35 years, so I am biased.)

Chuck Spinney is a former military analyst for the Pentagon who was famous for the “Spinney Report,” which criticized the Pentagon’s wasteful pursuit of costly and complex weapons systems.

Weblink:
Unjust cause: Historian Gar Alperovitz on the decision to bomb Hiroshima and Nagasaki, by Andrew Cockburn, Harpers Magazine, May 25, 2016

Obama signs Hiroshima memorial guestbook with message of peace as he is criticized for using last months of his presidency as an ‘apology tour’, Daily Mail (UK), May 28, 2016 (with extensive photos)