By  Ilya Arkhipov and Marek Strzelecki, Bloomberg News, May 13, 2016 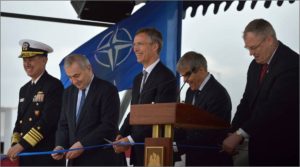 Russian President Vladimir Putin warned that NATO’s missile-defense shield in Romania and Poland is threatening peace in Europe and said a new arms race may emerge between his country and its Cold War foe.

Poland broke ground on the northern wing of the anti-ballistic missile shield Friday, a day after Romania inaugurated rocket batteries to the south. The two complexes have fueled antipathy between the alliance and Russia, which are in the deepest confrontation since the collapse of Communism after the Kremlin annexed [sic] Crimea from Ukraine in 2014.

“Now after the placement of these missile defense elements, we have to think how to neutralize the threats for the security of the Russian Federation,” Putin said at a meeting with defense officials in the Black Sea resort city of Sochi. “The people who are making such decisions should know that until now they have lived in calm, comfort and security.”

The North Atlantic Treaty Organization is consolidating its presence in eastern Europe after Russia forcibly changed borders in the region and because it continues to intimidate its neighbors, Secretary General Jens Stoltenberg said in Romania on Thursday. Putin said NATO’s missile defense bases and increased troop presence were “extra steps” toward a “shakeup of the international security system” and “a news arms race” in which he said Russia wouldn’t take part.

“We won’t be drawn into this race, we’ll go our own way,” Putin said. “We’ll do everything necessary from our side to ensure and preserve the strategic balance of forces that is the most reliable guarantee to prevent starting large-scale military conflicts.” 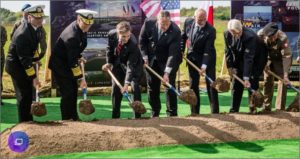 Poland started building an installation at the former military airport in Redzikowo near the Baltic coast on Friday. A counterpart to the base in the southern Romanian village of Deveselu, the site will be able to host about 300 U.S. troops in 2018. That follows ramped-up defense spending among Baltic NATO members Estonia, Latvia and Lithuania, who plan to seek further increases in NATO troop rotations at the alliance’s July summit in Warsaw.

While Russia has repeatedly complained about the shield, which Putin said was for offensive purposes, NATO’s members have stressed that it’s solely a defense against potential attacks from so-called “rogue states,” particularly Iran.

NATO isn’t looking to start a new Cold War,  Stoltenberg said. He added that the Aegis rockets, defensive weapons that can’t carry warheads and are designed to collide with and destroy ballistic missiles outside of the atmosphere, aren’t technically able to shoot down long-range missiles from Russia. Poland and Romania joined NATO along with other eastern European states a decade after the collapse of their communist-era overlord, the Soviet Union.

“Today is a great day for Poland’s efforts to get the highest possible military security guarantees,” Polish Defense Minister Antoni Macierewicz said in Redzikowo Friday. “Those efforts have never been directed at anyone, but they aim to ensure we can live and develop in peace after years of a hard regime.”

Russia is also stepping up its defenses and plans to create three new military divisions by the end of the year, Defense Minister Sergei Shoigu said on May 4. Putin has amassed forces, including short-range ballistic missiles and anti-ship, air-defense, and electronic weaponry, in the Kaliningrad exclave that cuts into Poland’s Baltic Sea coast, Lt. General Ben Hodges, the commander of U.S. Army forces in Europe, said in December.

MOSCOW — As American and allied officials celebrated the opening of a long-awaited missile defense system in Europe [Romania on May 12, Poland on May 13] with a ribbon cutting and a band, the reaction in Russia on Thursday suggested the system had raised the risks of a nuclear war.

Russian officials reiterated their position that the American-built system imperiled Russia’s security. But the public discussion in Russia was darker, including online commentary of how a nuclear confrontation might play out in Europe, and the prospect that Romania, the system’s host, might be reduced to “smoking ruins.”

“We have been saying right from when this story started that our experts are convinced that the deployment of the ABM system poses a certain threat to the Russian Federation,” the Kremlin spokesman, Dmitri S. Peskov, told reporters in a conference call.

“Measures are being taken to ensure the necessary level of security for Russia,” he said. “The president himself, let me remind you, has repeatedly asked who the system will work against.”

The United States has asserted that the anti-ballistic missile system would protect only against “rogue” states, particularly Iran, and provide no protection for either Europe or the United States from Russia’s far larger arsenal of nuclear missiles. The North Atlantic Treaty Organization site will be controlled by an American officer.

The system, called Aegis Ashore, was essentially transferred from a seaborne launchpad onto land in Romania, at the Deveselu air base. The United States on Friday planned to break ground on a second site, in Poland, that should be completed in 2018. But a deputy United States defense secretary, Robert Work, reiterated Thursday there are “no plans at all” to strengthen this missile umbrella to protect against Russia.

In Moscow, the Foreign Ministry spokeswoman, Maria Zakharova, said Russian defense experts consider the site a threat. “We still view the destructive actions of the United States and its allies in the area of missile defense as a direct threat to global and regional security,” Ms. Zakharova said.

She said that the Aegis Ashore launchpad was “practically identical” to a system used aboard Aegis warships that is capable of launching Tomahawk cruise missiles.

While the United States says it has no Tomahawk missiles at the site in Romania, Russian officials say the launchpad violates a 1987 treaty intended to take the superpowers off their hair-trigger nuclear alert, the Intermediate-Range Nuclear Forces Treaty, by banning land-based cruise and medium-range missiles with a range from 300 to 3,400 miles.

The short flight time of these missiles diminished to mere minutes the window Soviet leaders would have had after a warning to decide whether to launch a second strike, raising the risks of mishaps. Any redeployment of nuclear-capable missiles in Central Europe would roll the clock back to this nerve-racking 1980s status quo.

“We have to announce this openly, without any additional diplomatic formulations,” Ms. Zakharova said of the Russian assertion the site violates the intermediate-range missile ban. “We are talking about violation of this treaty.”

President Vladimir V. Putin of Russia has warned that an American antimissile deployment in Eastern Europe could prompt Russia to withdraw from the treaty. The United States last year accused Russia of violating the treaty by failing to declare the true range of two missile types.

Last fall, Russian security officials appeared to drop hints of another military response to the missile defense system — a nuclear-armed drone submarine. Russia, this leak appeared to say, has options.

During a high-level security meeting, a television camera zoomed in on an open binder showing the weapon’s design, ostensibly by accident. The drone, according to easily decipherable text accompanying the design drawing, would be capable of carrying a large nuclear device into coastal waters and detonating it, touching off a radioactive tsunami to flood and contaminate seaside cities.

The submarine would “defeat important economic objects of an enemy in coastal zones, bringing guaranteed and unacceptable losses on the country’s territory by forming a wide area of radioactive contamination incompatible with conducting military, economic or any other activities there for a long period of time,” it said.

A Russian commentator, Konstantin Bogdanov, wrote on Lenta.ru, a news portal, that the antimissile sites in Eastern Europe might even accelerate the slippery slope to nuclear war in a crisis. They would inevitably become priority targets in the event of nuclear war, possibly even targets for preventive strikes. Countries like Romania that host American antimissile systems might be the only casualties, he wrote, whereas the United States would then reconcile with Russia “over the smoking ruins of the East European elements of the missile defense system.”

The newly inaugurated anti-missile site in Romania certainly poses a threat to Russia’s national security, the Kremlin said in response to NATO claims to the contrary. “We have been saying right from when this story started that our experts are convinced that the deployment of the ABM system poses a certain threat to the Russian Federation,” presidential spokesman Dmitry Peskov said on Thursday.

“Measures are being taken to ensure the necessary level of security for Russia. The president himself (Vladimir Putin), let me remind you, has repeatedly asked who the system will work against?”, Peskov said.

The response comes after NATO Secretary General Jens Stoltenberg reiterated the site is not a threat to Russia. “This system is directed against threats coming from outside the Euro Atlantic space,” he said at a ribbon-cutting ceremony at the remote Deveselu airbase in southern Romania.

Romanian President Klaus Iohannis said the system was “purely defensive, not directed against any nations and cannot be used in an offensive operation.”

On Friday, the U.S. will start construction work on an ABM site in Poland due to be ready by late 2018.

The U.S. and NATO have been arguing for decades that the plans to deploy an anti-missile shield in Europe would not compromise Russian security. The AEGIS Ashore system deployed in Romania is a less ambitious incarnation of the ABM system, which replaced the initial project envisioned by the Bush administration. The shield is designed to protect Europe from a possible missile attack by Iran, the alliance says.

Russia remains unconvinced. While it doesn’t dispute that its strategic nuclear arsenal would not be compromised by the Romanian site if a global nuclear war were to happen, Moscow says it would be a significant factor in a smaller-scale conflict that doesn’t involve hundreds of missiles fired by each side.

The alleged defensive nature of the system is under debate as well. Long-range radar, part of the AEGIS antimissile system, can be used to spy on missile tests and aircraft in Russian airspace, providing the US with additional intelligence.

Moreover, the system uses a vertical launching system to fire missile interceptors, which was derived from the naval version of AEGIS. The same launchers are used to fire Tomahawk cruise missiles from U.S. guided-missile destroyers. Moscow says the Romanian site could easily and secretly be converted into a cruise missile base that can attack targets on Russian soil.

The Romanian deployment is perceived by the Russian military as a violation of the spirit of Intermediate-Range Nuclear Forces Treaty, which Moscow and Washington signed in 1987. The U.S. under President George W Bush unilaterally withdrew from another Cold War treaty, which banned it from developing a national antiballistic missile in the first place, so Moscow is suspicious of American intentions.

Russia has suggested on many occasions signing a legally-binding deal, which would address Moscow’s concerns with US antimissile plans in Europe, but Washington has rejected the idea.

Belarus pledges full support for Russian plans to counter US missile defense in Europe, RT.com, May 16, 2016

The Belarusian foreign minister has voiced concern about the US and NATO beefing up military contingents in Europe, promising his country will join Russia in offering an appropriate response to the deployment of US missile defense systems on the continent…

Poland on Friday broke ground on the northern section of a US missile defence shield launched in Romania a day earlier, which Russia slammed as a serious security threat despite US assurances to the contrary.

Escalations in a new cold war, by Jonathan Marshall, Consortium News, May 14, 2016