By Alexander Mercouris, for Russia Insider, Jan 27, 2015 (and see other articles enclosed further below)

Syriza’s victory in the Greek parliamentary elections on January 25 raises the question of the new Greek government’s policy towards Russia. The previous New Democracy-led, conservative Greek government was unswervingly loyal to the EU’s policy of sanctioning Russia. Will the new government follow suit or will it change the policy? 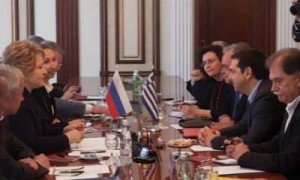 Alexis Tsipras meets with Valentina Matviyenko, head of Russia’s Federation Council (upper house of Parliament) in Moscow in May 2014

In contrast to some other EU states, Greece is traditionally strongly pro-Russian (63 per cent of Greeks have a favourable view of Russia according to a Pew poll). The EU’s anti-Russian sanctions policy has never been popular in Greece.

Greeks also have a completely different take on the Ukrainian conflict than do other Europeans. To some extent this is due to greater familiarity. There is an old and well-established Greek community in Ukraine, whose centre is Mariupol.

Another factor consolidating Greek hostility to the Maidan movement is that support in Greece for the Maidan movement tends to be strongest amongst supporters of the neo-Nazi Golden Dawn party, some of whose members have actually volunteered to fight on the Ukrainian side in the war. This has the effect within Greece of conflating opposition to Maidan in Ukraine with opposition to fascism in Greece itself. In a country like Greece, where memories of the German occupation in the Second World War remain vivid and where a fascist military dictatorship was in power as recently as 1974, this is not a factor to be underestimated.

The election was not, however, fought on the issue of relations with Russia. In fact, this issue went unmentioned throughout the election campaign.

This is because for Greeks, relations with Russia and the conflict in Ukraine are very much secondary issues. The subject of overwhelming concern for most Greeks is the country’s economic crisis. The success or failure of the Syriza government depends not on how it handles relations with Russia, it depends on whether or not it succeeds in solving the economic crisis.

Syriza has been elected because it is seen as the party most willing to stand up to Berlin and Brussels. Agreeing to extend the sanctions will provoke questions about whether this is really so. Syriza’s powerful left wing would be especially unhappy.

Given the overriding need to solve the economic crisis, Syriza may, however, be unwilling to oppose a policy – even one it strongly disagrees with – if it feels that would place in jeopardy its prospects of getting Berlin and Brussels to agree a write-off of Greece’s debt. Given that for Syriza progress on the debt write-off is a make or break issue, the pressure on Syriza to go along with the sanctions policy if that is the price that must be paid to secure a debt write-off, may in the end be too strong to resist.

It is not a foregone conclusion this will happen. When the EU imposed sectoral sanctions on Russia in July, Syriza condemned them saying they were “catastrophic for Greek agriculture”. The very first foreign dignitary with whom Alexis Tsipras (Syriza’s leader and Greece’s new prime minister) met was reportedly the ambassador of Russia.

Syriza’s choice of coalition partner is the party of the Independent Greeks led by George Kammenos. Its platform closely resembles that of Marine Le Pen and of the French National Front. The Independent Greeks are an outspokenly anti-bailout party, opposing what they say is the rule of Greece “by email from Berlin”. They may be even less willing to compromise on the sanctions issue than Syriza itself.

Much will probably depend on what happens next and how Berlin and Brussels react to the new government. If Berlin and Brussels take a hard line Syriza may be less willing or able to compromise on the sanctions issue. If, instead, they are willing to negotiate with Syriza, then a trade-off that sacrifices Syriza’s stance on sanctions in return for concessions on Greece’s debt is a possibility that cannot be excluded.

What suggests that such a trade-off is what Syriza actually has in mind is that Syriza has up to now spoken only of “working to persuade” other EU states that the sanctions against Russia are wrong. Syriza has not categorically committed itself to vote against the sanctions. Since the issue was never brought up during the election campaign, Syriza has never been put under pressure to make its stance on this issue clear.

If the new Syriza-led Greek government does nonetheless vote against the sanctions when they come up for renewal in March and July – a possibility that cannot be entirely excluded – then short of expelling Greece from the EU, the sanctions will end. The legal position is clear. Without the unanimous agreement of all EU member states, including Greece, the sanctions cannot be extended.

Should Syriza screw up the courage to take this step, then it is unlikely to find itself alone. It would have at least the tacit support of several EU states such as Austria, Slovakia, Italy and Hungary that are known to be unhappy with the sanctions.

The end of the sanctions may not make an immediate difference to Russia’s financial situation. If Germany remains hostile, it is unlikely western bank lending to Russia would resume on any significant scale.

The end of the sanctions would however be a humiliating blow to Angela Merkel, providing conclusive proof that her hitherto unchallenged leadership of the EU was slipping away from her.

We have already discussed the mounting opposition to her anti-Russian policy within Germany itself. The extent of this opposition became even more clear at the World Economic Forum in Davos [in January 2015]. The German business community has enthusiastically embraced the Russian proposal for a free trade zone between the Russian led Eurasian Economic Community and the EU.

Merkel’s response shows the pressure she is now under. She could not reject the idea outright.  Instead, she tried at Davos to hold the line by passing the idea off as her own whilst trying simultaneously to link progress on the idea to Russian concessions in the Ukrainian conflict.

On top of her problems in Germany Merkel now faces rebellion in Europe. More and more European countries disagree with her sanctions policy. The European Central Bank has begun quantitative easing against her wishes. Greece now has a far-left government elected on a platform opposing the whole range of her policies, including her policy towards Russia. If the Podemos party – with a programme very similar to Syriza’s – comes to power in Spain, the rebellion will have spread beyond her ability to control.

At the G20 summit in Brisbane [November 2014], Merkel complained about the emergence of a pro-Russian bloc of states within the EU. She has repeatedly returned to this theme in speeches since then.

In reality, there is no “pro-Russian block” of states within the EU, nor is there ever likely to be. What there is, is growing opposition to Merkel’s policies. With Syriza’s victory that opposition is certain to grow. That is the most important consequence of Syriza’s victory.

Greece’s new radical left wing-dominated government signalled on Tuesday that friction with its European partners might extend from economic to foreign policy when it distanced itself from an EU call to consider broader sanctions against Russia. A spokesman for the ruling coalition of Alexis Tsipras, prime minister, said Greece had not approved a statement from EU heads of government that asked their foreign ministers to review further sanctions in response to the latest flare-up of violence in eastern Ukraine, blamed by the US and most European nations on Russian-backed separatists.

The Greek statement raised questions over whether the new government, led by the radical leftist Syriza party, would support a continuation of existing EU sanctions, including visa bans and asset freezes on Russian officials and Moscow-supported separatists, when they come up for renewal in March.

The first foreign diplomat to meet Mr Tsipras after his formal appointment as premier on Monday was Andrei Maslov, the Russian ambassador to Athens, who passed on a congratulatory telegram from President Vladimir Putin.

Nikolai Fyodorov, Russia’s agriculture minister, suggested on January 16 that, if Greece’s debt woes forced it to leave the EU, the Kremlin would help Athens by lifting a ban on Greek food exports that forms part of the measures adopted by Moscow in retaliation for western sanctions.

Syriza has already given a taste of its foreign policy outlook in the European Parliament, where, since last May’s elections, its MEPs have adopted a number of pro-Russian positions, including voting against a EU-Ukrainian association agreement.

Costas Isychos, a Syriza foreign affairs spokesman, last year derided western sanctions on Russia as “neocolonial bulimia” and praised the military efforts of the Kremlin-backed separatists in Donetsk and Lugansk in eastern Ukraine.

Syriza’s 2013 party manifesto demanded Greece’s exit from NATO and the closure of a US navy base on the island of Crete.

However, the party has since then played down its hostility to Nato, making clear its highest priority is to secure extensive debt relief from its EU partners and to abandon austerity policies at home.

Though a NATO member, Greece in modern times has often enjoyed warm relations with Russia, and the Soviet Union before it, no matter what the political complexion of the government in Athens. The two countries are culturally close, with a shared Orthodox religion, and left wing Greeks in the cold war used to have an anti-US, anti-imperialist outlook very close to the views of Moscow. 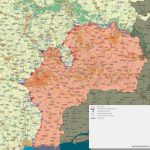