A common place cliché about democracy is that a gauge of its maturity is the capacity to guarantee the rights of minorities. Language is one of those basic, fundamental rights for which people sacrifice their lives and shed the blood of others. The language of a minority is the pledge of its survival amidst a surrounding majority, a cornerstone of its identity. The right to use a regional or minority language in private and public life is considered an inalienable right under all international conventions on human rights, including the European Charter for Regional or Minority Languages. Preserving these languages is an essential part of an inclusive, pluralistic, culturally diverse democracy. 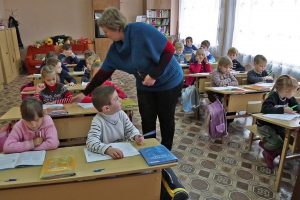 Classroom in eastern Ukraine (image from ICRC video on YouTube)

Canada is an officially bilingual country where a Canadian citizen is guaranteed the right to be served in any federal institution in one of the official languages – English or French.  Any official ceremony is held in two languages. A unilingual, French or English politician or public servant aspiring to reach the high echelons of the federal government bureaucracy must learn the other language; otherwise his or her chances of advancement are accordingly limited. This official bilingualism was a hard-won concession from the English ruling Canadian elite, a victory of Quebecers who resisted and survived in the English-speaking North American encirclement. Fifty years ago, the Canadian establishment understood the need to accommodate the French speaking minority if Canada was to survive as a country. Even some Aboriginal language speakers are slowly winning rights to education and government services in their languages.

The Parliament of Ukraine (Verkhovna Rada) recently adopted a new law on education seeking to extend the use of Ukrainian in school. Since 1991, the only official language in Ukraine has been Ukrainian (including in Crimea). This new law restricts the rights of children of ethnic minorities to receive their education in their native language.  It is clear that the main aim of the law is to reduce the use of Russian as the language of education.

According to the new law, beginning on September 1, 2018, children of ethnic minorities and indigenous people may continue to study in their respective languages in preschool institutions and primary education–as they have done until now–while also learning Ukrainian as a separate subject of study.  However, they will not be able to pursue education in their native languages once they move to the intermediary and high school levels. There, the bulk of disciplines will be taught in Ukrainian. Native language study will be offered only as one of the disciplines.

The law also provides for the possibility to teach one or several disciplines in English or other official languages of the European Union. In the case of ethnic minorities in Ukraine, these languages are Romanian (around 400,000 ethnic Romanians), Hungarian (around 150,000 ethnic Hungarians), Bulgarian, Polish, Slovak, Czech and several others. Russian is not a language of the European Union, which means that as of 2018, no discipline will be taught in Russian in public schools, in spite of the fact that one third of the Ukrainian population calls Russian its mother tongue. This is a clear violation of the Constitution of Ukraine. Article 10 guarantees “an unhindered development, use and protection of Russian language and languages of other ethnic minorities of Ukraine”.

The Ukrainian law on languages adopted in 2012 also explicitly cites Russian as a language of an ethnic minority. The law provoked heated debates in the Verkhovna Rada at the time, featuring fist fights and torn shirts and suit jackets among Rada deputies. The 2012 law grants to ethnic minority languages the status of ‘regional language’ in areas where a minority constitutes at least ten per cent of the local population. Regional languages are to be used in public administration, media, and education, in parallel to Ukrainian.

In March of 2014, the Rada tried to revoke the 2012 language law. It was a first, impetuous action of the new, right-wing government that came into power on February 21-22, 2014. This revocation attempt sent a threatening message to Russian speaking Ukrainians that their right to use Russian was under attack. The Donetsk and Lugansk oblasts (regions), where Russian outweighs Ukrainian as the mother tongue, rebelled.

Let me reiterate once again: according to the new education law, one or several disciplines can be taught in intermediate and high school in all languages of ethnic minorities except Russian. In Ukraine at present, 89.7 per cent of children go to Ukrainian language schools, 9.7 per cent pursue their education in Russian and 2.7 per cent study in languages of other minorities (these figures do not include the population in the Donetsk and Lugansk people’s republics). Presently, there exist distinct schools in which children receive schooling in their mother tongue. Chapter 7 of the new education law states that children belonging to ethnic minorities are guaranteed the right to get preschool and primary education in their mother tongue. This right is realized through the creation of separate classes (groups). But with the new law, there will no longer exist comprehensive, secondary education or schools in the languages of ethnic minorities.

No wonder this new education law has been harshly criticized by the governments of Hungary, Romania, Bulgaria, Russia and Greece. (The Polish government has adopted a wait-and-see attitude.) High officials of the concerned countries declared that the new education law infringes the rights of ethnic minorities in Ukraine and violates international conventions. Hungary has vowed to block any initiative of Ukraine in the European Union as a result. The president of Romania annulled a planned visit to Kyiv in protest.

Ukraine replied that it will refer the law for comments to the Venice Commission, a body of European constitutional law experts. The Ukrainian Minister of Education, Lilia Hrynevych, will hold consultations with her counterparts and with deputies from all concerned parties in the EU. The minister says the parts of curriculum in intermediary and secondary school to be taught in the languages of the European Union will be determined in additional legislative acts and in bilateral agreements between Ukraine and respective countries.

Minister Hrynevych says the new education law does not violate the Ukrainian constitution or the rights of ethnic minorities. The logic is as follows: the results of external, independent evaluations show children from ethnic minority regions score badly in their knowledge of Ukrainian language because their entire secondary education is taught in their first language. Therefore, she says, such students cannot compete with Ukrainian students for jobs in the public sector or in other sectors where Ukrainian language fluency is necessary. Thus, she says, their rights to education and work are compromised.

One can assert with certainty that Ukrainian officials wanting to please European politicians will find a way to accommodate all ethnic minorities except one. What about Russian speaking Ukrainians? President Poroshenko has stated that Ukraine has no intention of consulting with Russia when it comes to the language of education in Ukraine. “We left the prison of nations,” he pompously declared, referring to Russia. Yet he is recreating the same, alleged prison of nations in his own country by further restricting the rights of Russian-speaking Ukrainians. The irony of the situation is that Poroshenko himself uses Russian at home.

Once again, it is worth reminding that in South-East Ukraine, Russian-language schools consitute a significant percentage of total schools, including  25 per cent in Zaporizzhia region, 27 per cent in Kharkiv region, 30 per cent in Odessa region, 35 per cent in Luhansk region and 40 per cent  in Donetsk region according to the May 2017 data of the State Statistics Service of Ukraine (these data do not include the Donetsk and Lugansk people’s republics). What will happen to these schools if the new education law is implemented?

Since 1991, the Ukrainian language has significantly strengthened its position, especially in education. The post-Soviet generations of Ukrainians speak Ukrainian to a much greater extent than during the Soviet Union. Many more Ukrainians consider Ukrainian as their mother tongue. At least half of Ukrainians are bilingual and speak and read in both Ukrainian and Russian. This is a richness to be preserved, not thwarted. The Russian language does not constitute a threat to Ukrainian language in today’s Ukraine; Russian-Ukrainian bilingualism adds to the country’s cultural richness.

Canada, with its French-English bilingualism, could provide Ukraine with valuable expertise on inclusive language policies. Alienating the one third of Russian-language Ukrainian citizens from the new, ‘European’ Ukraine is the wrong way to go if Ukraine is to become part of Europe.

It seems the Ukrainian political leadership has not learned the lessons of events in Crimea and Donbas, where an exclusive, Ukrainian nationalism seriously alienated much of those populations. Instead, the government ignores the reality of bilingual Ukraine and continues to divide the country along language lines while repeating incessantly the mantra of a united Ukraine.

Halyna Mokrushyna is a free-lance journalist and part-time professor of sociology at the University of Ottawa.  She is a contributing editor of the New Cold War: Ukraine and Beyond website. Her articles have been published on Counterpunch, Truthdig, and Truthout websites. She holds a doctoral degree in Linguistics, an MA in communication a BA in French language and literature. She is currently finishing her doctoral dissertation ‘The Gordian Knot of Past and Present: Memory of Stalinist Purges in Modern Ukraine” at the University of Ottawa.