The mainstream U.S. reporting on the Ukraine crisis has been as biased and imbalanced as any in recent memory, leaving many Americans confused about what the on-the-ground reality is, as retired Col. Ann Wright discovered.

Most Americans don’t have a clue what has happened in a place called Crimea or why it is on the frontlines of what is becoming a new Cold War. In fact, few even know where it is. But Crimea’s location has made it one of the most frequent battlegrounds of empires — and today is no exception.

Some Americans may remember Crimea through Alfred, Lord Tennyson’s poem “Charge of the Light Brigade” about the slaughter of a British cavalry unit as it charged into a devastating crossfire from Russian artillery and riflemen during the 1854 Crimean War, a disastrous attack immortalized in some of the most infamous words of war…

However, fewer Americans probably remember that in 1941, the Nazis mounted a 250-day siege of the Crimean city of Sevastopol, in which the Soviet forces suffered some 26,000 soldiers killed and 95,000 taken prisoner, including about two-thirds wounded. The Germans and their Axis allies also suffered heavy casualties and the delay in capturing Sevastopol contributed to Germany’s decisive defeat at Stalingrad in 1943. 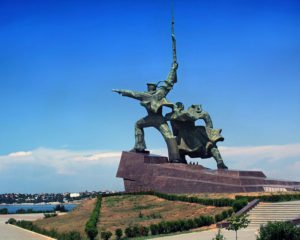 ‘Soldier and Sailor’, the monument in Sebastopol, Crimea honoring the defenders of Crimea during the WW2 Nazi invasion and occupation (Aleksander Kaasik, on Wikipedia)

As the Nazis were forced into a westward retreat, the Soviet Union regained control of Crimea. With the Nazi occupation ended, Soviet leader Josef Stalin deported about 230,000 inhabitants of Crimea to Central Asia. The mass deportation removed about one-fifth of the total population, mostly Tatars, as a collective punishment for alleged Nazi collaboration. Over the ensuing years, Crimea was repopulated by ethnic Russians.

In 1954, the Soviet government annexed Crimea to Ukraine, one of the Soviet republics, and Crimea remained part of Ukraine when it became a separate country following the break-up of the Soviet Union in 1991. But the population was resistant to being politically absorbed into Ukraine. A 1991 referendum favored making Crimea an autonomous zone and a 1994 referendum sought greater autonomy from Ukraine.

Crimea regained the world’s attention in 2014 after a U.S.-backed coup against the elected government of Ukraine. In the weeks before the coup, U.S. involvement was exposed in an intercepted phone call between Assistant Secretary of State Victoria Nuland and Geoffrey Pyatt, U.S. Ambassador to Ukraine.

Assistant Secretary of State for European Affairs Victoria Nuland, who pushed for the Ukraine coup and helped pick the post-coup leaders. Nuland castigated the European Union’s hesitancy to support demonstrators in the Maidan Square who were spearheading the ouster of elected President Viktor Yanukovych. “Fuck the E.U.,” Nuland declared as she and Pyatt discussed who should become Ukraine’s new leaders. “Yats is the guy,” Nuland said in reference to Arseniy Yatsenyuk, who would emerge as prime minister after the coup.

The coup on Feb. 22, 2014, brought to power a right-wing Ukrainian nationalist government hostile to the country’s ethnic Russian minority with the parliament voting to remove Russian as an official language. Amid the post-coup chaos and violence, the leaders of Crimea called for a referendum to decide whether Crimea should secede from Ukraine and reunite with Russia.

On March 16, 2014, more than 80 per cent of the voters participated and some 96 per cent favored rejoining Russia, a decision that the Russian government accepted. The Russian Federation formally annexed [sic] Crimea six days after the vote. Because Russia’s southern naval fleet is located in Crimea at Sevastopol, Russia gave as its rationale for annexing Crimea – beyond the overwhelming result of the referendum – the national security necessity of protecting the port and fleet from anti-Russian forces.

However, the United States and its Western allies denounced Crimea’s referendum, called the annexation a violation of international law and imposed sanctions on Russia and Crimea. The EU sanctions prohibited investment in Crimea, infrastructure, assistance to Russian oil and gas exploration in the Black Sea, and certain tourist activities in Crimea. The U.S. sanctions prohibited new investments in Crimea; the import and export of goods, technology and services from or to Crimea; and the purchase of real estate in Crimea and blocked certain individuals from coming to the U.S.

Despite those restrictions and a U.S. government travel advisory against visiting Crimea, I took part in a 20-person delegation (19 Americans and one Singaporean) who went to see for ourselves what had happened there and to speak with as many residents as we could. Ours was the first international delegation to visit Crimea from the United States in over two years.

Organized through the Center for Citizen Initiatives, our delegation met with government officials, business people, veterans of World War II and the Soviet-Afghan war, students and Crimean Tatars. We spoke with people who voted for reunification with Russia and some who did not.

The sanctions have been successful in destroying the tourism business in Crimea.  Before, most visitors arrived in Crimea by cruise ships from Turkey and Greece through the Bosporus Straits into the Black Sea to the Crimean ports of Yalta or Sevastopol. Annually, over 260 cruise ships dock in Crimea, but for the past two years none have arrived, thereby decimating the international tourist industry. However, travel by Russian citizens to Crimea has increased.

Sanctions on use of international credit cards and on cell-phone technologies had the most striking impact on daily life in Crimea. Now, two years later, some international credit cards will work in Crimea, but cell-phone service is spotty. Travel for citizens of Crimea is more difficult as they must obtain a Russian Federation passport. Individuals said it is harder to travel with a Russian passport and particularly from Crimea.

After the referendum, the interim Ukrainian government cut off electrical power to Crimea and last November, electric transmission lines were blown up by right-wing Ukrainian nationalists forcing Crimean businesses and families to get generators. Russia moved quickly to provide emergency electrical supply to the peninsula and then constructed new electric power cables bringing electricity into Crimea from Russia under the Kerch Strait.

Russia is also constructing a $3.2 billion, 19-kilometer (11.8 miles) bridge that will connect Crimea directly with Russia.

For its part, the U.S. government canceled programs that were available to people in Crimea when it was a part of Ukraine. Peace Corps volunteers were removed and school construction projects by U.S. military units ended. U.S.-funded professional exchange programs stopped as did U.S. agricultural and law enforcement projects.

Some of the Crimeans with whom we spoke regretted the loss of contact with the United States and its programs, particularly its exchange programs. One educator lamented the difficulty in finding exchange programs for high school and college students in Crimea to live and learn in the United States. Graduates of universities in Crimea are finding that some educational institutions outside of Russia are no longer recognizing their diplomas and certificates because of the sanctions.

Educators said they do not want to be isolated from the world. They asked that our delegation assist in finding professional and educational exchanges with educational institutions and civic organizations in the United States.

One local official expressed great concern about the negative reaction of the international community to the decision by Crimeans to reunite with Russia, compared with the lack of criticism for the overthrow of Ukraine’s elected government in 2014. She believed that without the coup there never would have been a referendum in Crimea and a subsequent annexation by Russia.

She asked, “Why isn’t the international community focusing on the overthrow?”

Crimeans noted that many of the sanctions were not aimed at Russia itself, but just Crimea – to teach the citizens of Crimea a lesson, they told us.

Ann Wright served 29 years in the U.S. Army/Army Reserves and retired as a Colonel.  She was a U.S. diplomat for 16 years and served in U.S. Embassies in Nicaragua, Grenada, Somalia, Uzbekistan, Kyrgyzstan, Sierra Leone, Micronesia, Afghanistan and Mongolia.  She resigned from the U.S. government in March 2003 in opposition to the war on Iraq.  She is the co-author of Dissent: Voices of Conscience.

The following comment was posted to Consortium News in the comments section of the above article:

Thanks to Ann Wright for this informative article. Her observations square with my visit to Crimea in July 2014. At that time, the tourism industry was being hit very hard, but most Crimeans were positive about the future. Many polls subsequent to the secession vote of March 16, 2014 show overwhelming satisfaction with the decision.

I am puzzled by the use of the term “annexation” of Crimea by Russia that is used in the article. The article clearly explains that the decision of Crimeans to secede from Ukraine and rejoin the Russian federation was conducted by a legal and constitutional authority–the Autonomous Republic of Crimea, as the peninsula was named and constituted under Ukraine–and was overwhelmingly supported by the population. The real “annexation” of Crimea took place back in 1954. That decision can at least be explained by the enormous exigencies of post-WW2 reconstruction.

Russia moved speedily to create new supplies of electrical energy following the mentioned bombings by Ukrainian extremists of electrical supply to Crimea from Ukraine. Those happened in November 2015. All four electricity cable lines (not “stations”) serving Crimea from Ukraine were bombed. The Ukrainian government stood by and did nothing. Several weeks later, the government formalized the road transport blockade which the extremists imposed beginning in September 2015, again with total impunity from Kyiv.

There is a wealth of historic as well as contemporary information on Crimea on the dedicated web page of New Cold War.org: https://newcoldwar.org//category/crimea/.
–Roger Annis 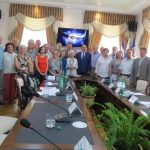 Report from a recent visit to RussiaCrimea, Solidarity with Ukrainian people, Ukraine 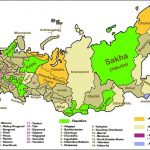