Ukraine-Russia-Europe:
No more dependence on allies, Europe should take its fate into own hands – Merkel after G7, RT.com, May 28, 2017

While Britain and America remain friends, European nations must rely more on themselves, German Chancellor Angela Merkel told a rally of voters in Munich. She said she got this feeling after meeting world leaders at the recently concluded G7 summit in Italy. “The times in which we could completely depend on others are on the way out. I’ve experienced that in the last few days,” she told the crowd Sunday, a day after attending the G7 summit… 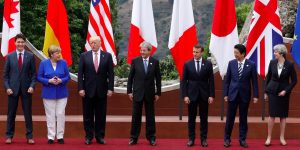 After summits with Trump, Merkel says Europe must take fate into own hands, Reuters, May 28, 2017

[Non-news flash: German Chancellor Merkel’s claimed disaffection with the United States political leadership would be more credible if she were actually proposing some new policy shifts. For example, she could lift Germany’s political and economic sanctions against Russia, which are based on the lies of a ‘Russian annexation’ of Crimea and ‘Russian military intervention’ into eastern Ukraine in 2014. She could end Germany’s participation in NATO’s reckless and dangerous military buildup along Russia’s borders. She could end Germany’s participation in regime-change war in the Middle East. In such a case, her dispirited musings about the U.S. government under Donald Trump and the Brexit plans of UK Prime Minister May could be taken seriously.]

When left-wing becomes right-wing, over Ukraine

[In its March 2017 edition, New Left Review provides an example of how anti-Russia prejudice over the 2014 events in Ukraine and Crimea leads formerly left-wing thinkers and think tanks to become right wing.

[The bimonthly journal has provided little if any analysis of the NATO member-countries’ military and political escalation against Russia occasioned by the 2014 right-wing coup in Ukraine. In its print edition of March 2, 2017, it publishes a conservative, right-wing viewpoint of the new cold war against Russia consisting of a review of three new books on Ukraine. Each of the books under review are authored by conservative writers and are favorably treated by the reviewer. The review is titled ‘Eat Your Spinach’ and can be read here on New Left Review.

[The reviewer rejects the idea of a new cold war but provides little by way of useful analysis, instead voicing a dispassionate agnosticism over the whole matter. He does provide a long list of alleged Russian ‘transgressions’ since the year 2000 which make the country equally culpable for  heightened tensions with Western imperialism.

[Back in July 2015, the former editor and eminence grise of NLR, Perry Anderson, penned a lengthy analysis of the crisis over Ukraine in which he described the March 16, 2014 referendum in Crimea to secede from Ukraine as a “Russian annexation”. He absurdly compared the Crimean people’s decision in that referendum to imperialist land grabs in history that “crushed the self-determination of the inhabitants in blood”. His essay also baldly stated that the rebel forces in eastern Ukraine who were resisting the violent ‘Maidan’ coup in Kyiv were responsible for shooting down Malaysian Airlines Flight 17 on July 17, 2014. Three years after that shootdown, the world is still waiting for the Western accusers, including Perry Anderson, to present their evidence.]

U.S. Senator John McCain tells Australia’s ABC that Russia is a bigger threat to the world than ISIS, ABC.net.au, May 29, 2017

Turkey-Syria-Middle East and Caucasus:
The Manchester bombing is blowback from the West’s disastrous interventions and covert proxy wars, by Max Blumenthal, AlterNet, May 25, 2017

… The son of anti-Qaddafi immigrants to the UK, Abedi grew up in Manchester’s community of Libyan exiles. A  report in the London Telegraph indicated that he had traveled just weeks before his attack to Libya, where Salafi-jihadi militias are competing for control of the destabilized country. Abedi had also reportedly traveled to Syria to join up with the extremist rebels that have waged a six-year-long insurgency against the country’s government, with billions of dollars in assistance from the West and its Gulf allies. According to French Interior Minister Gerard Collomb, it was in these conflict zones where Abedi was radicalized.

The impressionable 22-year-old returned to the UK with enough training to make a fairly sophisticated bomb that massacred 22 concert goers, many of them children…

Suicide bomber Salman Abedi’s multiple trips back and forth to Libya, where his family is widely associated with the Salafi jihadi movement, provided ample opportunity for advanced training to execute the massacre in Manchester.

Though an end to Syria’s conflict is not in sight, plans for reconstruction projects by the Syrian regime [sic] and international aid organizations are underway.

Canada to extend by four years its naval expeditionary force in Red Sea-Persian Gulf-Indian Ocean, report in Toronto Star, May 28, 2017

[In addition to the implicit military threat directed against Iran by its naval force in the Persian Gulf, Canada is continuing the formal severance of diplomatic relations with Iran and is maintaining selected economic sanctions, specifically those said to be related to “nuclear goods and technologies and anything that could help Iran in developing ballistic missiles” (Wikipedia). In September 2012, Canada closed its embassy in Tehran and expelled Iranian diplomats from Canada. Iranian consular services in Canada are currently provided by arrangement through the embassy of Oman.] 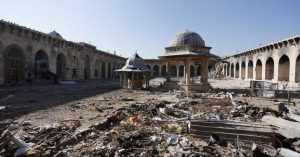 Ruins of the Great Mosque of Aleppo. The minaret once standing in background will be rebuilt (Molhem Barakat, Reuters)

Russia to spearhead rebuilding of Umayyad Mosque in Aleppo, report by Sami Moubayed, Asia Times, May 29, 2017

Destroyed in the Syrian civil war, the rebuilding of the most famous mosque in Aleppo is tinged with power politics

Two Toronto men in DC attack made failed refugee claims in Canada 15 years ago. The applications were dismissed in 2003. What actions the pair took afterward is unclear, as is their current status in Canada.

United States:
Donald Trump’s war on journalism has begun, but journalists are not his main target, by Peter Maass, The Intercept, May 28, 2017

… Journalists are not the real target of Trump’s war on journalism, however. We are the highly-visible collateral damage, the broken glasses on the bruised body of free expression. The true targets – the people whom the Trump administration most wants to punish and silence – are the government officials who provide us with the news for our stories. The First Amendment protects journalists but not their sources; there is no constitutional right to tell journalists the truth…

Trump calls for more spending on health care so it’s ‘the best anywhere,’ but he just proposed big cuts, by Damian Paletta, Washington Post, Sunday, May 28, 2017

President Trump on Sunday evening called for more spending on health care and said his plan to overhaul the tax code “is actually ahead of schedule” — two statements that are at odds with the budget proposal he unveiled just last week. The statements came as part of a blizzard of Twitter posts the president made after he returned from his first foreign trip…

Trump’s ‘America first’ infrastructure plan: Let Saudi Arabia and Blackstone take care of it, by David Dayen, The Intercept, May 27, 2017

Throughout the presidential campaign, Donald Trump blasted his rival for taking money from Saudi Arabia, which, he regularly charged, has a horrific human rights record and was behind the attack on September 11.“You talk about women and women’s rights? So these are people that push gays off buildings. These are people that kill women and treat women horribly. And yet you take their money,” he complaine.

Trump, of course, has never been married to anything he has said in the past. But even by Trumpian standards, a recent series of deals he struck with Saudi Arabia stand out.The two that made the news — a $110 billion arms deal and a $100 million gift to an Ivanka Trump-inspired endowment — are remarkable in their own right. But the third, which was rolled out much more quietly, is no less stunning: The Saudi kingdom joined forces with a top outside adviser to Trump to build a $40 billion war chest to privatize U.S. infrastructure.

The vehicle would employ the same kind of public-private partnerships, known as P3s, the Trump administration has endorsed for its trillion dollar infrastructure plan. The deal hands over control of projects to rebuild American roads and bridges to the private sector and a foreign country…

Countdown to renegotiating the North American Free Trade Agreement of 1994, special feature in the Globe and Mail, May 27, 2017

The 1994 agreement – an expanded version of a Canada-U.S. free-trade deal from 1988 – created what was then the biggest free-trade area in the world. It removed barriers to the flow of goods and labour between Canada, the United States and Mexico, under the oversight of an independent dispute-settlement process…

The federal tribunal that rules on violations of human rights is demanding that the Liberal government in Ottawa take immediate steps to comply with multiple orders that it adequately address the health-care needs of First Nations children. In a strongly worded ruling issued May 26–one that comes more than a year after the Canadian Human Rights Tribunal (CHRT) found Ottawa was discriminating against First Nations children by allowing jurisdictional issues to interfere with the provision of adequate care–a two-person tribunal panel said the government has not complied with its demand that the situation be corrected…

If the world’s nations really do intend to contain global warming to within 2°C, there is no alternative to drastic cuts in greenhouse gas emissions, according to a new study…

Indonesian Borneo is finished: Pollution reaching epic proportions, by Andre Vltchek, in Borneo, published on the ‘Op Edge’ feature of RT.com, May 28, 2017

BORNEO –  How destructive can man get, how ruthless, in his quest to secure maximum profit, even as he endangers the very survival of our planet? The tropical forests of Kalimantan (known as Borneo in Malaysia), the third largest island in the world, have almost totally disappeared. Coalmines are savagely scarring the hills; the rivers are polluted, and countless species are endangered or extinct.

It is all a terrible sight, whether you see it from the air or when driving (or walking) through the devastation that is taking place on the ground…

Cape Town, one of South Africa’s top tourist destinations, is almost out of water, by Robyn Dixon, LA Times, May 24, 2017

… The city was declared a disaster area in March as it confronted its worst drought in more than 100 years. The premier of the Western Cape province, Helen Zille, on Monday declared the entire province a disaster zone.

Scientists believe they have settled one of the great polar puzzles – why Antarctica is warming at a rate so much slower than the Arctic region. And the answer is a simple one: Antarctica is so much higher…

A shadowy international mercenary and security firm known as TigerSwan targeted the movement opposed to the Dakota Access Pipeline with military-style counterterrorism measures, collaborating closely with police in at least five states, according to internal documents obtained by The Intercept. The documents provide the first detailed picture of how TigerSwan, which originated as a U.S. military and State Department contractor helping to execute the global war on terror, worked at the behest of its client Energy Transfer Partners, the company building the Dakota Access Pipeline, to respond to the indigenous-led movement that sought to stop the project.