Ukraine-Russia-Europe:
U.S. army to move brigade’s worth of firepower into Poland, by Dan Stoutamire, Stars and Stripes, April 26, 2017

… Some three million citizens from the 27 nations live in Britain, while up to two million Britons live on the continent — all facing uncertainly on such issues as welfare and employment.

Unions in France split over whether to back Emmanuel Macron, by Aurelien Breeden, New York Times, May 1, 2017

Slovaks protested against corruption on April 18 in one of the largest demonstrations in the country this decade, an echo of intensifying unrest across the European Union’s eastern wing over backsliding on rule of law…

Tensions rose along the Syrian-Turkish border as Turkey and the U.S. moved armored vehicles to the area after Turkey launched airstrikes on People’s Protection Units (YPG) targets killing at least 90 militants last week, The Washington Post has reported…

Troops intervene in eastern Syria along border with Turkey, report on RT.com, April 29, 2017 (with video news report including interview with analyst Dan Glazebrook)

U.S.-backed militias said on Monday they had pushed Islamic State fighters out of the old quarters of Tabqa, a strategically vital town controlling Syria’s largest dam, on the Euphrates River, hemming the militants into the remaining modern district along the shore.

The Syrian Democratic Forces (SDF), an alliance made up of Syrian Kurdish and Arab fighting groups, are fighting a multi-phased campaign to drive Islamic State from its stronghold of Raqqa, 40km (25 miles) downstream and east of Tabqa…

As President Trump reaches the 100-day mark, the liberal and mainstream criticism is that he hasn’t accomplished much, but that baiting only makes Trump likely to wage more wars and push a more right-wing agenda

Congress agrees on $1 trillion budget deal – but no money for border wall, The Guardian, May 1, 2017

How does Trump’s tax plan help the middle class? ‘Honestly, we don’t know’ by Sahil Kapur, Bloomberg News, May 1, 2017

Amid the spectacle, democratic norms have prevailed. In fact the defining feature of his presidency has been abject nothingness, writes Daniel Dale. 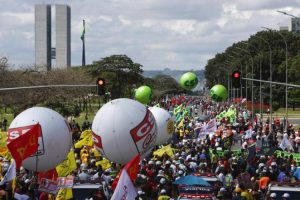 The 35 million-strong general strike that stopped Brazil in its tracks, by Brazzil.com, April 30, 2017

… The strike was called immediately after Temer’s administration pushed through a controversial labor reform bill on Wednesday in Brazil’s chamber of deputies. The reform would undermine workers’ rights by eliminating payment for their commute from their contracts, reducing compensation for employer abuse, and most importantly, allowing employers to reduce workers’ salaries while increasing their work hours.

The bill, which proposes to end mandatory union dues, must still be approved by the Senate. It was approved by Brazil’s lower house by 296 votes to 177. [Coup president] Temer is also proposing a 20-year freeze on public spending and cuts to pension protections…

The U.S. has kicked off joint naval exercises with South Korea as the U.S. aircraft carrier group led by the USS Carl Vinson entered the Sea of Japan through the Tsusima Strait. The war games got underway on the heels of a missile test launch by North Korea [reported by Western media as a failed launch]…

Not the first time that Canada’s defense minister has falsified his role in Afghanistan, by Bruce Campion-Smith, Toronto Star, April 29, 2017

… It was not, however, the first time Sajjan had made the claim. In 2015, he told the British Columbia television program ‘Conversations That Matter’ that Gen. Jonathan Vance, the current chief of defence staff who was previously a commander in Afghanistan, saw him as a key figure in the 2006 offensive. “If I could quote him, he said I was the architect of Operation Medusa, one of the biggest operations since the Korean War that Canada has led. We took the fight hard to the Taliban,” Sajjan said in July 2015, just months before he was elected as a Vancouver MP…

The political and economic problems with guaranteed income idea for Canadians, by David Bush, April 26, 2017

Basic income is an opiate for the masses, not a sustainable solution, by Eric Reguly, Globe and Mail, April 28, 2017 (subscriber only)

As the debate over whether the Keystone XL zombie pipeline should be built shifts squarely to the state of Nebraska, with a public hearing set for this Wednesday, it is worth looking at how some of the issues surrounding the pipeline have developed since the project was last contested in the court of public opinion.

TransCanada is still parroting the same old lines claiming the pipeline, “is a critical infrastructure project for the economic strength and energy security of the United States.” For that claim to stand up, you would think that the pipeline would fill some crucial niche in the U.S. energy system. But the only niche the project fills is fueling the export of refined petroleum products and exacerbating a glut of oil in Oklahoma and Texas. With international oil companies selling out [withdrawing investments] from the tar sands in Alberta like rats leaving a sinking ship, an additional pipeline to the most expensive place to produce oil in the world is the worst energy security plan conceivable…

One year after the massive wildfire that struck Fort MacMurray, Alberta in the heart of the tar sands region, by Joseph Hall, Toronto Star, April 29, 2017

Two people died in the May 2016 wildfire in Fort McMurray. Children were allowed to go to school on May 3; by noon that day, a panicked, emergency evacuation of the 90,000 city residents was ordered. It lasted up to six weeks. 1,595 structures with 2,579 housing units were lost to the blaze. Water supply to the city was fully restored on June 30, 2016.

… This column is not a lesson for people who want to advance good climate policy. Instead, it is a dog whistle to people who feel confused about climate change. It’s nothing more than textbook denialism… 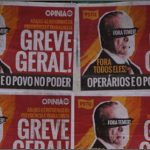 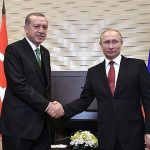