The European Broadcasting Union has officially confirmed to RT that Russia won’t be participating in the 2017 Eurovision song contest in Kiev after the country’s contender, Yulia Samoylova, was denied entry into Ukraine by the governing regime in Kyiv.

[The theme of Eurovision 2017 is ‘celebrate diversity’.]

The U.S. military has used its GBU-43/B Massive Ordnance Air Blast Bomb (MOAB), nicknamed “the mother of all bombs,” for the first time in combat. The U.S. Air Force used it in Afghanistan on April 13 (local time) to target Islamic State tunnels and personnel. The 21,000-pound (9,525 kg) bomb was dropped in the Achin district of the Nangarhar province in eastern Afghanistan.

The Pentagon has confirmed the use of the MOAB, and is currently assessing damage. General John Nicholson, commander of U.S. forces in Afghanistan, signed off on its use, CNN reported. Authority was also sought from General Joseph Votel, commander of U.S. Central Command (CENTCOM)…

One of Australia’s most prestigious universities has become the centre of a movement that believes Syrian dictator Bashar al-Assad has been framed by the West for last week’s chemical weapons attack. The University of Sydney is standing by a controversial senior lecturer, Tim Anderson, who has dismissed the sarin gas attack in the Idlib Province as a “hoax” and called Syria’s six-year civil war a “fiction” perpetrated by the US “to destroy an independent nation”…

United States:
Out of 46 major editorials on Trump’s Syria strikes, only one opposed, by Adam Johnson, Fairness and Accuracy in Reporting, April 11, 2017

Of the top 100 U.S. newspapers, 47 ran editorials on President Donald Trump’s Syria airstrikes last week: 39 in favor, seven ambiguous and only one opposed to the military attack…

Some populist! Trump caves to big business in epic ‘bank of Boeing’ flip-flop, by Zaid Jilani, The Intercept, April 13, 2017

The Export-Import Bank is a big corporate welfare program that likes to keep a low profile. But in the past few years, the anti-establishment Republicans of the House Freedom Caucus and a handful of progressive Democrats including Bernie Sanders turned it into a rousing populist issue, first refusing to re-authorize the bank, then blocking nominations of new board members.

After MINUSTAH, and in violation of Haiti’s constitution, UN seeks to keep an armed force in Haiti, by Kim Ives, Haiti Liberte, April 12, 2017  Related: Associated Press exclusive: For years, UN soldiers exploited children for sex in Haiti but no arrests, by Paisley Dodds, Associated Press, April 13, 2017  (with related reports)

[The Quebec government was obliged to convene a public inquiry into spying on journalists by Montreal police and by the Quebec provincial police force. The spying goes back to at least the year 2012. The inquiry began on April 10.]

… In the past, it appears investigators were relatively free to seek search warrants for journalists’ communications so long as they could draft a convincing application that would sway a justice of the peace. 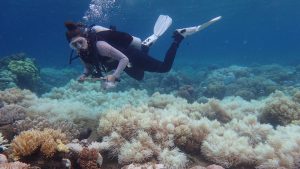 A close-up look at the catastrophic bleaching of the Great Barrier Reef, interview with Terry Hughes, by Richard Schiffman of Yale Environment 360, April 10, 2017

Scientists are reporting the second mass bleaching in the Great Barrier Reef in the last year. In a Yale Environment 360 interview, researcher Terry Hughes says these events have damaged two-thirds of the world’s largest coral reef and are directly caused by global warming.

The largest glacier in Greenland is even more vulnerable to sustained ice losses than previously thought, scientists have reported…

New Cold War.org Information Bulletin is posted daily (or every several days) to the New Cold War.org website as a complement to the feature articles published or re-produced in full. Text in [square brackets] is that of New Cold War.org editors. The bulletin is included in the daily, Monday-Friday newsletter emailed to website subscribers. Subscribe at website home page. Comments and suggestions welcome, email to [email protected]. 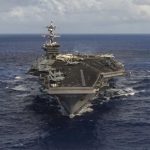 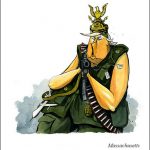