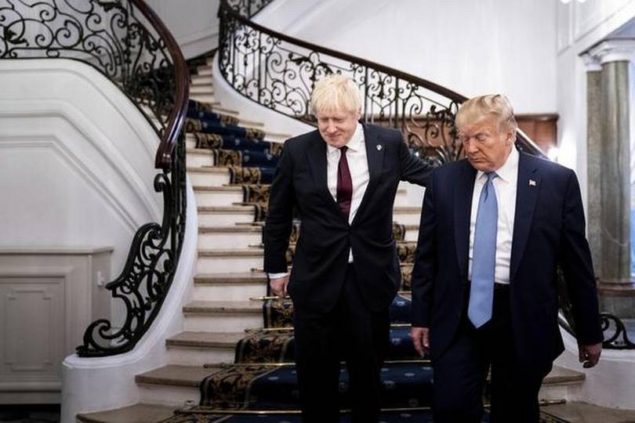 The Donald Trump administration’s trade war against China, occasioned by anxiety over the latter’s scientific and technological advances, is set to deepen in the context of the COVID-19 pandemic.

In late May, Prime Minister Boris Johnson of the United Kingdom floated the idea of creating a new international platform—D10, or Democracy 10 alliance. The D10 is to comprise the Group of Seven (G7) states and three others; it will be discussed formally at the G7 meeting in June. The proposed members of the alliance are the G7 countries (Canada, France, Germany, Italy, Japan, the U.K. and the U.S.), along with Australia, India and South Korea. The purpose of this alliance is not entirely for mutual benefit. The agenda, Boris Johnson suggests, is to attack China.

Many of the states in the D10 have been hit hard by the COVID-19 pandemic, and many of them (notably the U.K. and the U.S.) have started to blame China—rather than their own incompetence and the evisceration of their public health systems—for the high death toll. President Donald Trump of the U.S. has been most vocal in his diversion of blame on China, which he says, without evidence, suppressed information about the virus and perhaps even created the virus. These inflammatory statements from Trump and Johnson have provided a way for them to ignore the fact that they had both made no preparations since the World Health Organisation (WHO) first publicly warned about the virus in early January. Trump, in a fit of pique, stopped U.S. funds for the WHO and has now withdrawn the U.S. from the WHO entirely. He, like Johnson, points his finger at Beijing and does not acknowledge any failure by his government for the catastrophic deaths in the U.S.

Western anxiety about China’s growth is not because it is the centre of global manufacturing. It is perfectly acceptable to Western capitalist firms that China is the factory of the world, and that literate, well-fed and healthy Chinese workers produce iPhones and refrigerators for the world market. The fact that so many factories are located in China and that China’s growth rate dwarfs that of other countries are in itself not objectionable to the Western world. What annoys them is that China has much greater ambitions than merely delivering workers to global capitalism. In April, the United Nations’ World Intellectual Property Organisation (WIPO) reported that for the first time in 40 years, China had applied for more patent applications than the U.S. The WIPO said in its report that China’s intellectual property applications increased by 200 per cent in 20 years. Francis Gurry, Director General of WIPO since 2008, has followed China’s “deliberate strategy” to “advance innovation and to make the country a country that operates at a higher level of value.” “It is working”, Gurry said, “and intellectual property is certainly part of that strategy.”

China’s 58,990 patent applications last year come in a wide range of scientific endeavours, including artificial intelligence, brain science, dark matter, genetic engineering and quantum computing and communications. These are areas at the cutting edge of science. Many of them will have important technological implications, which, if they work, could catapult Chinese industry to a position of considerable strength against any other industrial sector in the world.

The trade war that Trump’s administration prosecuted against China from July 2018—and which he has now deepened—was occasioned by the anxiety over China’s scientific and technological advances. The core issue was the 5G technology developed by Chinese firms, notably Huawei Technologies. According to a recent WIPO report, Huawei filed the most patents for any corporation for the third consecutive year. It is considered one of the world’s leaders in the next generation of telecommunications technologies.

U.S. firms, such as Cisco, and U.S. government agencies, such as the National Security Agencies, have accused Huawei since 2003 of a range of offences such as espionage and intellectual property theft. Court cases have piled up; Huawei has settled some of them and denied others. Then, in May 2019, Trump banned U.S. firms from supplying components and software to Huawei without prior government authorisation; his executive order provided wide latitude to block foreign firms based on security concerns. Major Silicon Valley firms, such as ARM, Google, Intel, and Qualcomm, broke ties with Huawei.

In 2019, the U.S. tried to form an international coalition against Huawei and China, but it was not successful. Many countries see the advances in technology as an opportunity and do not want to antagonise Huawei. Roughly 170 out of the world’s 193 countries use Huawei widely, including as the most commonly available mobile phone. In 2019, Trump put a lot of pressure on Mexico to cut ties with Huawei. But newly elected President Andrés Manuel López Obrador was not keen since he wanted to move his country into Huawei’s 5G technology. Meng Wanzhou, daughter of Huawei’s founder and Huawei’s Chief Financial Officer, left Shenzhen for Mexico with a stopover in Canada. Meng Wanzhou was arrested in Vancouver on behalf of the U. S. government. She remains in custody in Canada, pending extradition to the U.S.

The arrest of Meng Wanzhou in Canada comes alongside pressure by Australia to prevent a Huawei high-speed Internet cable to connect Papua New Guinea to the Solomon Islands. The battle to scuttle Huawei’s growth became part of the agenda not only of the United States but of its main allies, notably the U.K., Canada and Australia. Each has come to recognise that China’s industrial and technological growth will undermine the dominance of England’s old settler colonial world. This was unthinkable.

Theft of intellectual property cases are not unique to China or to Chinese firms, since firms with all kinds of national origins attempt to gain technological advantages and spy on their competitors. If this context is not placed on the cases of industrial espionage then it appears as if only China indulges in theft.

Finally, accusations of government surveillance using private telecommunications firms are not unique to China, since there remain serious accusations about the close ties between the U.S. intelligence agencies and Silicon Valley firms.

Boris Johnson is keen to have India join the D10 alliance. India already participates in the Quad (with Australia, Japan, and the U.S.) and in the Indo-Pacific Strategy, both U.S.-led anti-China platforms. Prime Minister Narendra Modi will likely join the D10 if it means closer fealty to the U.S.

However, this is going to seriously jeopardise India’s deployment of 5G technology. India has already delayed the auction of 5G spectrum. Insiders say that there is only one reason why the government has stalled the process. They say that in the short term, without Chinese technology from Huawei and ZTE, there is no possibility for the creation of 5G networks in India. In other words, the Modi government would rather scuttle India’s transition to 5G on behalf of deepening the anti-China alliance with the Western powers than adopt off-the-shelf technology sold by its neighbour to improve telecommunications in India.

Boris Johnson, on behalf of Trump, is eager to make the debate around technology a political issue. Here is commerce being suffocated by the eagerness of certain countries to maintain their dominance in the world. That India might go along with them is a sign of its own independence.