Netanyahu banks on escalation with Iran 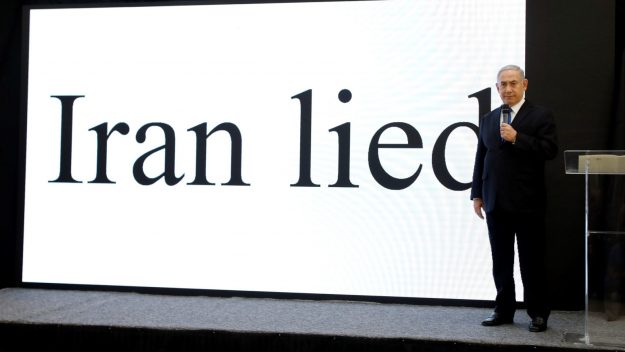 This week US President Donald Trump will decide whether the United States will stay or go with regard to the Joint Comprehensive Plan of Action (JCPOA), also known as the Iran nuclear deal.

Israeli Prime Minister Benjamin Netanyahu, with an eye on Trump’s May 12 decision deadline, offered his own political trifecta April 30, all hedged toward the prospect of escalation with Iran.

First, Israeli F-15 fighter jets destroyed a cache of 200 Iranian-origin missiles in Syria, killing perhaps dozens of Iranians in the process. Second, the Knesset approved a proposal authorizing the prime minister and defense minister to declare war under extreme circumstances. And third, Netanyahu announced an intelligence windfall of Iranian nuclear documents, procured by Mossad operatives in Iran, which provide further detail of Iran’s clandestine nuclear program prior to the JCPOA.

“The question of why it was urgent for Netanyahu to push forward right now a law that grants him great power and simultaneously weakens the diplomatic-security Cabinet in a consequential decision to declare war was not subject to an in-depth or serious public discussion,” Mazal Mualem reports. “Naturally, it was overshadowed by the drama of the speech Netanyahu delivered.”

“Netanyahu looked like a groom on his wedding day,” Ben Caspit writes. “He had the demeanor of an Apple executive introducing the world to the latest iPhone, not the darkest secrets of Iran’s nuclear program. Ostensibly, it was another productive day for Israel’s leaders and their security forces. In reality, Israel and Iran were still dancing a deadly tango on the mouth of the Middle Eastern volcano.”

Netanyahu’s public revelation of the documents may have undermined Mossad’s future operations inside Iran. “The exposure — claimed a former very senior Mossad official who spoke to Al-Monitor on condition of anonymity — could exact a steep price from the agency, both because the Iranians would seek to quickly plug the leak and because it could endanger operatives and operational procedures,” writes Yossi Beilin.

“Netanyahu’s mistake was in exposing an open secret,” Beilin adds. “The Iranians have been claiming for years that they do not intend to develop nuclear weapons, that they themselves were victims of nonconventional weapons (referring to the chemical warfare waged against them in the 1980s by Iraqi President Saddam Hussein) and that such weapons contradict the path of Islam. They also argue that the person who started developing Iran’s nuclear capability was the shah prior to the Islamist Revolution in 1979, and he did so with American help in order to develop nuclear energy for peaceful purposes. The truth is that Iran did begin to develop atomic weaponry, initially probably against Saddam and subsequently against everyone else, and tried to cheat the whole world.”

There is also the sense that an Iran-Israel conflict, already on a low boil, is about to heat up. “The Israel Defense Forces’ (IDF) freedom of action against Iran can also be attributed to the fact that until May 12, when President Donald Trump is scheduled to decide the fate of the Iranian nuclear deal, Tehran has put all its actions on hold,” Caspit writes. “The last thing that Supreme Leader Ayatollah Ali Khamenei and Islamic Revolutionary Guard Corps leader Qasem Soleimani need now is a major war in the Middle East targeting Israel. That is why Israel is allowing itself to tug on the rope and raise the threshold on an almost daily basis.”

In Iran, writes Saeid Jafari, “the assortment of broken promises by the United States, Israel’s attacks on Syria and the joint US-French-British missile strikes have all contributed to the emergence of deeply negative views among Iranian political elites of the prospects of any form of negotiations with the West over the country’s missile program. Although this viewpoint is more strongly felt among hard-liners, moderates and even Reformists appear convinced that any such negotiation will only be a pretext for weakening Iran’s capabilities and setting the stage for a more vulnerable Tehran in the future. If anything, this sentiment will likely increase manifold should Trump withdraw from the nuclear deal on May 12.”

“Now that the IDF is bracing for an Iranian response to recent alleged Israeli attacks in Syria (which, it is thought, left dozens of Iranian troops dead), Israel will be forced to decide how exactly it will respond,” Caspit writes. “The intelligence assessment is that Iran will attempt a response that exacts a similar cost and mode of operation to those taken by Israel. In other words, it would attack an Israeli military target and try to take a toll on uniformed troops. If that is the case, will Israel ‘contain’ the Iranian response and react in a measured and tempered way so that the situation doesn’t deteriorate any further? It all depends on the circumstances of the attack. Should Israel respond against Iranian targets in Syria, or should it attack Iran itself? This lies at the base of a significant debate, which has yet to be decided.”

“Previous articles in Al-Monitor revealed that some members of the Israeli Cabinet support moving this war against Iran directly to the territory of Iran itself, after allowing it to simmer on a low burner for such a long time.” Caspit adds. “In other words, if something blows up in Israel, something should blow up in Tehran as well. The purpose would be to ensure that Iran cannot hide behind its various ‘proxies’ in the region, whether Hezbollah, Syrian President Bashar al-Assad or the Shiite militias.”

Another trend to watch is the outcome of Lebanon’s parliamentary elections, which are taking place as this column goes to press. “Hezbollah is running candidates across Lebanon for the first time to expand the scope of a Hezbollah-friendly parliament,” Joe Macaron reports. “There is no doubt that the Shiite coalition (Hezbollah and Amal) is preparing a contingency plan by enlisting hawkish figures as candidates in case a political confrontation with Hariri is renewed. Hezbollah sees the elections as a chance to demonstrate that its legitimacy in Lebanon is not coerced. The challenge, therefore, is not to merely score a definite victory, but to secure a decent turnout in the predominantly Shiite areas, where there is growing socio-economic discontent. Secretary-General Hassan Nasrallah has made corruption a central campaign issue for the first time, setting the stage for a new phase in expanding Hezbollah’s role in governing.”