Neo-Nazis and Racism: A Global Reality 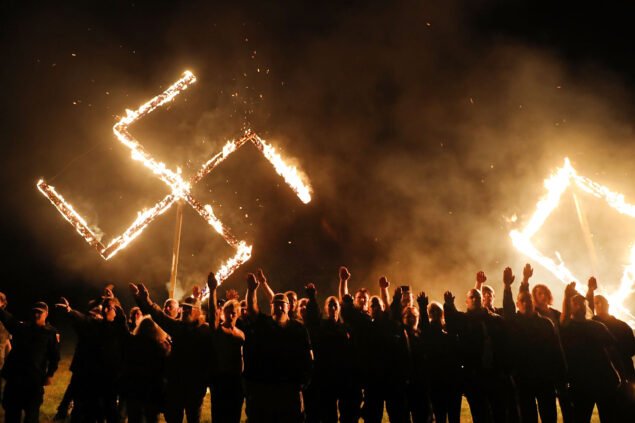 This worrying reality of rising racism, as well as the disastrous consequences of Covid-19 for human rights, will frame the work of the Council, which will be in session until March 23.

The neo-Nazi movements in full swing, the white supremacist conceptions that are reproducing like mushrooms, the racist violence in every corner of the planet, without exception. These are social scourges that “are becoming a transnational threat”, as the United Nations has just warned during the opening of the 46th session of its Human Rights Council in Geneva in the last week of February.

The “benefits” of the pandemic drama

This worrying reality of rising racism, as well as the disastrous consequences of Covid-19 for human rights, will frame the work of the Council, which will be in session until March 23.

“Taking advantage of the coronavirus pandemic, there is another epidemic that is spreading rapidly between countries and becoming embedded in our societies: that of racist, supremacist and neo-Nazi movements,” said António Guterres, UN Secretary General, at the opening of the event. Guterres also welcomed the Council’s decision to “report on systemic racism, accountability, redress and responses to peaceful protests against racism”.

The UN head unleashed a frontal critique. He explained that the groups promoting these ideologies have taken advantage of the emergence of the pandemic to increase their own power through “social polarization and political and cultural manipulation.” He further stated that they represent the greatest threat to internal security in many countries.

But these groups are not the only actors that have taken advantage of the complex circumstances surrounding the pandemic to promote and intensify their proselytizing and violent action. According to the UN Secretary General, in some countries there is also the case of authorities who have used “heavy-handed policies” on security issues and adopted emergency measures to “crush dissent, criminalize basic freedoms, silence independent information and restrict the activities of non-governmental organizations”. Coordinated global action is essential to put an end to this grave and growing danger,” he emphasized.

Spain appeared this week, once again at the center of European anti-racist criticism. The European Commission against Racism and Intolerance (ECRI), an agency of the Council of Europe, raised its voice to publicly criticize Spain for not having done anything about two of the recommendations it had presented three years ago: the problem of school dropouts among gypsy children and the need to create an independent body for the promotion of equality.

For its part, the Spanish daily El País recently questioned the Iberian abstention on two key resolutions voted at the United Nations. In its analysis It is time to act against racism in Spain, the newspaper refers first to the December 31 resolution on the adoption of concrete measures for the total elimination of racial discrimination, racism, xenophobia and related intolerance.

Spain, along with 43 other Western countries, abstained. Despite this abstention and several votes against (including those of the United States, Canada, Israel, Australia, Germany, France, the United Kingdom, Hungary and the Czech Republic), the proposal was supported by more than a hundred countries.

The El País analysis recalls that, in 2019, Spain also abstained when another significant resolution was voted on; on that occasion, against the glorification of Nazism and neo-Nazism and other political forms that contribute to exacerbating contemporary forms of racism. “Both abstentions manifest a clear lack of political will when it comes to addressing racism in our country, which we cannot afford,” stresses this analysis prepared by Jesús Migallón and Sergio Barciela, both experts on the subject of migration.

“Spain is being pressed to develop a regulatory framework that combats racism decisively, in the form of a Comprehensive Law against racism and xenophobia,” they argue. And they recall that both the Human Rights Council and the Committee on the Elimination of Racial Discrimination -both from the United Nations-, as well as the European Commission against Racism and Intolerance, have included in several of their reports on the Iberian country the recommendation to approve this law.

Migallón and Barciela emphasize a worrying and growing trend: although Spanish society has been characterized by its tolerance, their country is experiencing, in recent years, a rise in xenophobia in the heat of speeches of populist parties that stir up the ghosts and fears of citizen insecurity, unemployment or the loss of sovereignty, as happens in other European states.

The Spanish expression of these extreme right-wing political forces -with parliamentary presence in many European countries- is VOX, founded in 2013. With almost 15% of the electorate in the last elections, structured around an anti-immigration and xenophobic discourse, it summarizes its project “in the defense of Spain, the family and life… A movement of extreme necessity that was born to put the institutions at the service of the Spanish people, in contrast to the current model that puts the Spanish people at the service of politicians”, it declares.

The latest report of the Council for the Elimination of Racial or Ethnic Discrimination (CEDRE), attached to the Spanish Secretary of State for Equality and Against Gender Violence, serves as a thermometer of the Spanish reality on segregation issues during 2020.

Published at the end of January, said document (Perception of discrimination based on racial or ethnic origin by its potential victims in 2020) points out that, in light of “documented facts,” the level of discrimination has varied substantially from that documented in its previous report, in 2013. The sectors where individuals experience the most discrimination due to their ethnicity are access to housing (31%), establishments or spaces open to the public (30%), and the workplace (26%). The communities that perceive themselves as most discriminated against because of their skin color or other physical features are from non-Mediterranean Africa (82%) and the Roma people (71%).

Discrimination on religious grounds, including peculiar dress or clothing, has increased considerably and is particularly concentrated in the North African community (56%) and among the Indo-Pakistani population (45%). According to this report, the latter could be due to “a growing stigmatization of these groups, associated with terrorist behavior and Islamophobia”. On the other hand, there is a growing perception of Afrophobia, or racism against black people.

One of the most noteworthy data in the report is the “under-reporting” of complaints, since only 18.2% of the people who have experienced a discriminatory situation in the last year have filed a complaint, claim or report. There are several reasons for this very low percentage: lack of usefulness (22%), minimization and/or justification of the discriminatory situation (25%), lack of knowledge of how to do it or language problems (11%), or fear of generating legal problems of residence, documentation and regularization (10%).

Swiss voters will have to decide on March 7 on an initiative that, if accepted, will make it impossible to wear a concealed face in public places.

Known as the “burqa ban” and promoted mainly by right-wing groups and conservative activists, it also includes a ban on the nicab and other non-religious ways of concealing facial features. Paradoxical in times of pandemic and the widespread and mandatory use of chinstraps.

Between March 2016 and September 2017 this initiative managed to collect 105,000 signatures. According to the Swiss system of direct democracy, to bring an amendment to the Federal Constitution to a vote, the support of at least 100,000 citizens is required.

Supporters of the initiative argue that a ban on face-covering helps to prevent terrorist attacks and other forms of violence. At the same time, with an opportunistic bias and to channel the support of certain minority feminist sectors, the promoters see the ban as a way to promote equality between Muslim women and men, thus freeing women from a discriminatory patriarchal society.

Members of the committee promoting this initiative have pointed out that Islam is spreading in Europe and poses a threat to Christian culture. One of the most widespread slogans of the campaign is expressed on wall posters with the slogan “Stop extremism”.

The promoters of this anti-burqa campaign, which includes the most xenophobic forces in the country, seek to define the national political agenda with highly symbolic but quantitatively insignificant social issues. Various studies show that the number of women who regularly wear the burqa in Switzerland is less than half a hundred.

Those pushing the initiative are the same sector that succeeded in presenting in November 2009 another popular initiative that won the support of the majority of the electorate: the prohibition of building minarets – external towers on Muslim mosques – on Swiss territory. Despite the fact that the sector in Switzerland that identifies with Islam barely reaches 5% of the population, for months the public debate revolved around the risks associated with such thinking, the external threats to the system of Western and Christian values, and the need to strengthen the State’s iron fist against possible aggressions inspired by this conception.

By defining a debate on non-essential and non-priority issues -such as the use of burqas-, the racist right-wing has a significant impact on the national media agenda today. It mobilizes the most conservative instinct, even in the popular sectors. It generates fears of contact with the foreigner and the different. And, above all, it shifts the national political scenario towards the right, setting the playing field with increasingly retrograde and repressive rules of the game. Warm waters where neo-Nazis, xenophobes and racists bathe comfortably.

Headline photo: DRAKETOWN, GA – APRIL 21: Members of the National Socialist Movement, one of the largest neo-Nazi groups in the US, hold a swastika burning after a rally on April 21, 2018 in Draketown, Georgia. Community members had opposed the rally in Newnan and came out to embrace racial unity in the small Georgia town. Fearing a repeat of the violence that broke out after Charlottesville, hundreds of police officers were stationed in the town during the rally in an attempt to keep the anti racist protesters and neo-Nazi groups separated. (Photo by Spencer Platt/Getty Images) *** BESTPIX ***