By Scott Taylor, published on his website Esprit de Corps and in his weekly column ‘On Target’ in the Chronicle Herald (daily in Halifax, Nova Scotia), March 12, 2017 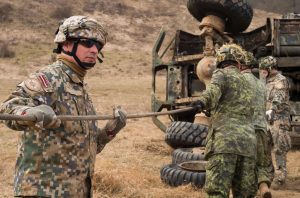 Last week, there was a mini media storm swirling around Foreign Affairs Minister Chrystia Freeland. The controversy arose from some international media reports that her maternal grandfather, Michael Chomiak, was a Nazi collaborator during the Second World War.

When Canadian journalists first asked Freeland for comment and clarification, she was quick to present herself as a victim of Russian disinformation.

“American officials have publicly said, and even (German Chancellor) Angela Merkel has publicly said, that there were efforts on the Russian side to destabilize Western democracies, and I think it shouldn’t come as a surprise if these same efforts were used against Canada,” said Freeland to reporters. 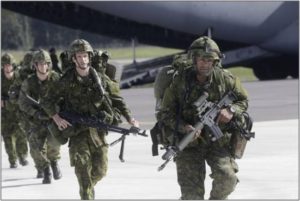 What Freeland neglected to mention was that her granddad was indeed a Nazi collaborator and that she has known this ugly truth for the past two decades. Instead of simply admitting what she knew to be true, Freeland falsely invoked the spectre of dastardly Russians spreading fake news to discredit her personally.

This is the same storyline that was recently put forward by Canada’s Chief of Defence Staff, General Jonathan Vance. At a defence conference, Vance warned that Russia would attempt to undermine Canadian support for the upcoming troop deployment into Latvia.

“There will be a desire to skew way out of proportion and potentially provide falsehoods about what is actually happening in Latvia with Canadian troops,” said Vance. He then assured the audience that Canada has its own communications strategy to “ensure that the truth prevails.”

The official spin on NATO deploying some 4,000 troops — including an estimated 450 Canadians — into the Baltic States is that this will be a tangible deterrent to the evil Russians. However, since Latvia, Lithuania and Estonia are all NATO members and therefore entitled to the alliance’s collective defence if attacked, such a bold troop deployment right on the Russian border could also be viewed as an unnecessary provocation towards the Kremlin.

Last year, it was announced that the Canadian contingent would arrive in Latvia in early spring, but this date has now been pushed back until June. This delay will no doubt make things a little easier for the Canadian government’s communications team because they won’t have to come up with an inspired way to spin Latvia’s annual tribute to fascism.

A parade in Latvia for the German SS 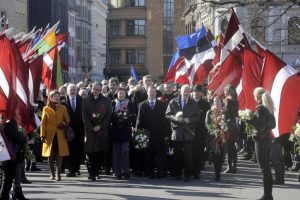 Since Latvia’s independence in 1990, every year on March 16 the locals stage a parade in the capital of Riga in commemoration of the SS Latvian Legion. This is the same Waffen SS that became synonymous with Adolf Hitler’s Nazis.

This is not Russian fake news. The parades to celebrate the SS were officially sanctioned. In 1998, March 16 was declared an official Remembrance Day in Latvia; however, due to international pressure, in 2000 this date was abolished as an official commemoration day. Riga city council then attempted to ban the marches in 2010, but that ruling was overturned by an administrative district court. The controversial parades thus continue to this day. 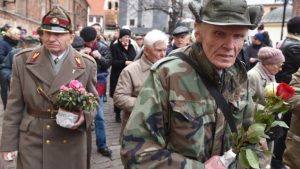 March in Riga, Latvia on March 16, 2016 to commemorate those Latvians who fought with German Waffen SS during WW2 (Ilmars Znotins, AFP)

We are all being bombarded with the ‘Russia bad’ media rhetoric, but on the other hand we all know that Nazis are really bad. So sending our soldiers to protect a large group of Latvians that are sporting SS runes and celebrating their Nazi past is bound to cause the majority of Canadians some unease.

A closer look at Latvia’s current parliament reveals that this is not merely a nostalgic commemoration of fallen warriors, as the neo-fascist (ultra nationalist) National Alliance Party holds 17 seats and is a member of the ruling coalition.

Then there is the little issue about the non-citizen status of all non-ethnic Latvian residents. Approximately one-eighth of Latvia’s two million inhabitants are effectively considered second-class citizens as they are not allowed to vote and cannot hold certain positions in local and national governments as well as in the civil service. The majority of non-ethnic Latvians are ethnic Russians, whose family history in Latvia dates back to the Second World War.

We repeatedly are told that we are deploying our military abroad to ‘defend Canadian values.’ However, Canadians do not celebrate Nazis and we pride ourselves on striving for equal rights for all.

As with Chrystia Freeland’s grandfather and his wartime Nazi collaboration, we need to be honest about Latvia’s shortcomings and not simply blame everything on those evil Russians spreading falsehoods. It isn’t disinformation if it’s true.

*  Another SS March in Riga this year? Another disgrace in an EU, OSCE, NATO capital? Stop the 16 March marches in Riga, Latvia! Statement dated Feb 17, 2017

Canada to send troops to Latvia to lead one of four NATO brigades near Russian border, by Murray Brewster, CBC News, June 30, 2016

The march in Riga, Latvia is Europe’s only annual event by Waffen SS vets