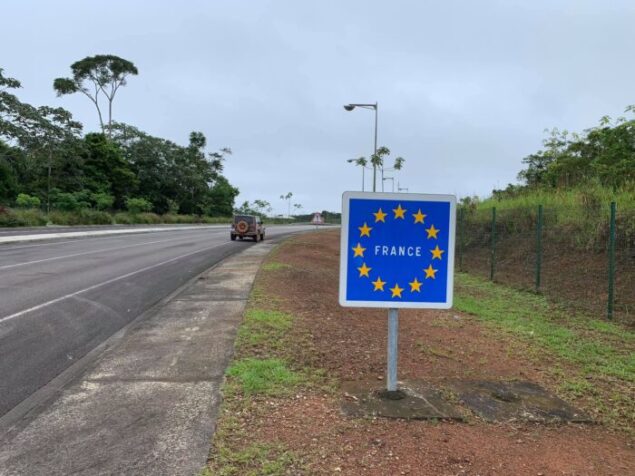 NATO and its constituent nations are active most everywhere nowadays.

The website of NATO’s Supreme Headquarters Allied Powers Europe (SHAPE) in Mons, Belgium featured a story on Bastille Day in which it interviewed a French chief petty officer with the SHAPE military police.

SHAPE had been based in France until the government of President Charles de Gaulle evicted it in 1967 when the head of state withdrew his nation from NATO’s integrated military structure.

The interview was unremarkable until the Frenchman was asked what were some aspects of France that outsiders (and perhaps not a few insiders) might not know. He said that France is a large country – no revelation there – and that metropolitan Paris is the largest urban area in Western Europe.

He also reminded readers that France borders seven countries: Andorra, Belgium, Germany, Italy, Luxembourg, Spain and Switzerland. Borders seven countries in Europe, that is. The officer surprised not a few readers, certainly, when he said the longest border France has with any country is with Brazil: some 450 miles. That’s how long the boundary is between Brazil and France’s overseas territory of French Guiana, which also borders Suriname (former Dutch Guiana). France’s border with the latter is 345 miles.

Earlier this year U.S. Southern Command held an Allies Conference 2021 with representatives of the Pentagon and opposite numbers from Britain, Canada, France and the Netherlands, all fellow founding members of NATO.

In 2006 the Standing NATO Maritime Group One (SNMG-1) entered the Caribbean Sea for the first time to pay port visits to fellow NATO members’ possessions and engage in exercises with the owners.

The preceding year then-Venezuelan President Hugo Chavez accused NATO of planning an invasion of his nation under the code name of Operation Balboa.

In 2018 Colombia was brought into NATO’s Partners Across the Globe.

NATO is no stranger to the Western Hemisphere.

In addition to Canada and the continental U.S., which provides NATO a 2,000-mile border with Mexico, other NATO possessions in the New World include:

The U.S.: Puerto Rico and the U.S. Virgin Islands.

French Guiana is home to France’s Guiana Space Centre, which is also used by its NATO allies, and is alternately known as Europe’s Spaceport.

It’s not only the Americas from the Arctic Circle to South America that is NATO territory; there is a continent to the east of French Guiana at which former colonial masters Belgium, Britain, France, Germany, Italy, the Netherlands, Portugal, Spain and Turkey – all NATO members- cast a covetous glance.

The French petty officer cited above also celebrated the fact that this year’s Bastille Day parade included troops with the Takuba Task Force, a military force in Mali led by France and consisting of conventional and special operations forces from NATO members Belgium, the Czech Republic, Estonia, France, Italy, the Netherlands and Portugal and from NATO Enhanced Opportunities Partner Sweden.

NATO and its constituent nations are active most everywhere nowadays.