NATO to send 4,000 troops to border with Russia-report

NATO is deploying an additional four battalions of 4,000 troops in Poland and the three Baltic States, according to a report citing US Deputy Secretary of Defense Robert Work. 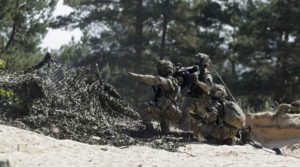 Work confirmed the number of troops to be sent to the border with Russia, The Wall Street Journal reports. He said the reason for the deployment is Russia’s multiple snap military exercises near the Baltics States.

“The Russians have been doing a lot of snap exercises right up against the borders, with a lot of troops,” Work said as cited by the Wall Street Journal. “From our perspective, we could argue this is extraordinarily provocative behavior.”

Although there have already been talks about German troops to be deployed to Lithuania, Berlin is still mulling its participation.

“We are currently reviewing how we can continue or strengthen our engagement on the alliance’s eastern periphery,” Chancellor Angela Merkel said on Friday, in light of a recent poll from the Bertelsmann Foundation that found only 31 per cent of Germans would welcome the idea of German troops defending Poland and the Baltic States.

London has not made its mind either, yet is expected to do so before the upcoming NATO summit in Warsaw in July.

Ahead of the deployment, NATO officials are also discussing the possibility of making the battalions multinational, combining troops from different countries under the joint NATO command and control system.

Moscow has been unhappy with the NATO military buildup at Russia’s borders for some time now. “NATO military infrastructure is inching closer and closer to Russia’s borders. But when Russia takes action to ensure its security, we are told that Russia is engaging in dangerous maneuvers near NATO borders.

“In fact, NATO borders are getting closer to Russia, not the opposite,” Russian Foreign Minister Sergey Lavrov told Sweden’s Dagens Nyheter daily.

Poland and the Baltic States of Lithuania, Latvia and Estonia have regularly pressed NATO headquarters to beef up the alliance’s presence on their territory.

According to the 1997 NATO-Russia Founding Act, the permanent presence of large NATO formations at the Russian border is prohibited. Yet some voices in Brussels are saying that since the NATO troops stationed next to Russia are going to rotate, this kind of military buildup cannot be regarded as a permanent presence.

Russia’s Defense Ministry says it’s ready for a tit-for-tat response to any NATO military activity near Russia’s borders. As Russia’s envoy to NATO Aleksandr Grushko put it, there are no “passive observes” in the Russian armed forces and Moscow would definitely compensate militarily for an “absolutely unjustified military presence.”

Are Poland’s elites itching for war with Russia?

By Peter S Rieth, published by the American Committee for East-West Accord, April 28, 2016

“The Russian plane should have been fired upon. Not shot down, but fired upon. Too bad the Americans didn’t fire. Secretary Kerry should have announced that next time, the United States will fire on the Russians.” These are the words of Roman Kuzniar, a key foreign policy advisor to the former President of Poland, Bronislaw Komorowski. In Poland, Mr. Komorowski was accused of being too soft on Russia. One can only imagine that if firing on the Russian air force in international waters is the view taken by the “doves” in Polish politics, the United States should be alarmed that the present government is even more hardline than the previous.

Yet the United States is on the brink of energizing Polish hardliners by placing at least an armored brigade of American troops on Polish soil. One can only imagine the myriad opportunities this will present to a Polish political class so hell-bent on starting a war against Russia that it actually expresses displeasure when a Russian fly-by over an American naval vessel in the Baltic Sea did not result in escalation and war.

Not even the President of Ukraine, whose government is in open conflict with Russia, is this extreme. For all of the routine accusations that President Poroshenko’s government throws at the Russians, international observers must admit that at least Mr. Poroshenko actually talks to Russian President Vladimir Putin. Russia and Ukraine have, after all, negotiated the Minsk accords which, while not satisfying everyone, are a benchmark upon which further diplomatic progress can be made.

The same cannot be said for Poland, whose political class came together above party lines to support the Maidan revolution which ousted Ukraine’s democratically elected President and then actively supported Kiev’s military efforts against Ukrainian citizens in the east who were disenfranchised by the Maidan. The latest close call between Russian and American forces in the Baltic is, for most people, a cause for concern. Secretary Kerry rightly praised the calm professionalism of American naval commanders. Poland’s political class is angry that the United States did not take the opportunity to start the third world war.

One might wonder what compels the broad, bipartisan consensus in Poland as regards Russia? Given that further escalation would at the very least damage economic relations which are already in tatters due to the crisis in Ukraine, why are Poland’s ruling elites playing with fire rather than working hard to reconcile East with West? The answer is largely due to the isolation of the ruling Solidarity elite from the common people. Unlike roughly 38 million Poles who have to work for a living, and four million who have fled West over the past 25 years to escape poverty, the Solidarity elites who were elevated to power in 1989 have almost never had to hold private sector jobs. They have either been in a branch of government or in its orbit for 25 years. This disconnection from reality blinds them to the pressing needs of their people.

Many of them also ascribe to dangerous expansionist creeds rooted in Promethism, a political ideology seeking eastward expansion and a settling of historical scores with Moscow. Rather than focus on economic growth for their people and the establishment of good relations with Russia, the Solidarity elite is determined to defeat Russia.

The United States fails to recognize that although it will presumably retain command over any American troops eventually stationed in Poland, it will be helpless in the face of Polish impetuosity. Polish military units might engage Russians on international waters, just as Poland invaded Kiev in 1919 hoping for French and British aid in the endeavor and nearly destroying their young country in the process. The United States has achieved international power and prominence due to a realistic application of military, economic and political power.

The Poles, always looking for a fight with the Russians, will make American prudence in military affairs almost impossible and will risk worsening an already tense situation. If the United States is determined to expand American military presence in Poland, the United States must retain full political control over the process so as to preclude the Polish political class from provoking a war with Russia.

Everyone recognizes the recent Russian fly-bys in the Baltic for what they were: a demonstration of strength in international waters. The American military reacted with measured professionalism and Secretary Kerry also reacted in proportion to the event, cognizant of the important economic and military cooperation linking Russia, Europe and the United States.

The Polish political class, rather than calling for peace, calls for war and bemoans American restraint despite the fact that such restraint will likely save their country from annihilation. The Polish people deserve better, they have a right to live in peace and happiness and do not exist to be cannon fodder for modern “Polish Masters” who ignore their plight and seek not defense against Russia but war with Russia at the cost of their own people.

In the end, as the Baltic Sea encounters demonstrate, expanding American military presence in the regions will only raise tension and prompt Russia to flex its own muscles. We have had these debates about deterrence before. Cold War history demonstrates that the expansion of military deterrence brings greater risk because the more weapons we aim at one another the more chance of those weapons being used, even if by accident or on account of one side losing its nerve.

NATO already has sufficient strength to defend its members against aggression, although even a NATO victory will likely mean the destruction of Poland, Russia and the peoples between them. Only authentic and intelligent diplomacy and a renewal of economic and cultural ties can truly solve the problems now afflicting the region.

Poland’s political elite lacks imagination, they are unable to fathom that the war they entertain would be the death of their people. The United States must demonstrate a more responsible posture and recognize the current Polish stance for what it is: a death wish combined with an itchy trigger finger. America should not allow those itchy fingers to influence how and when American military might is used.