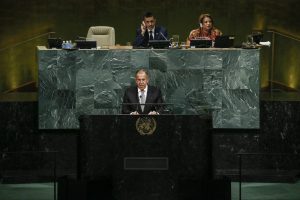 NATO is currently seeking to revive the Cold War climate instead of building a dialogue with Moscow, Russian Foreign Minister Sergey Lavrov said in his speech at the UN General Assembly in New York on September 21.

Russia has honestly walked along a long path of getting rid of the legacy of the Cold War but received no support in its efforts from its partners in the West, the minister said, expressing his regret over the fact that “some countries still prefer force to dialogue.”

The full text (in English translation) of Foreign Minister Lavrov’s speech to the UN General Assembly on Sept 21, 2017 is here, on the website of the Russian Ministry of Foreign Affairs.

“The West constructed its policy on the basis of a principle, ‘If you are not with us, you are against us’ and proceeded with hideous expansion of NATO to the east,” the Russian diplomat said, adding that such policy ultimately led only to “instability” in the post-Soviet republics and increased tensions in the region.

At the same time, the minister said that Russia is ready to cooperate with its western partners and work together in a constructive way to find mutually acceptable solutions of the pressing issues, including the Ukrainian crisis in particular.

He also expressed his hope that the Russian initiative that involves sending a UN peacekeeping mission to Eastern Ukraine would ultimately help to resolve the crisis, adding that the relevant draft resolution had been already submitted to the UN Security Council.

“Centuries of history have shown that a lasting settlement of difference can only be [achieved] through dialog and balancing of the core interests of the conflicting parties,” the minister said, adding that, “unfortunately, the arsenal of many western states does not include diplomacy but only rough pressure.”

“Any unilateral sanctions imposed aside from the sanctions approved by the UN Security Council are illegitimate and undermine the collective nature of the international efforts,” Lavrov said.

He then expressed concern over the new rounds of sanctions imposed by the US against Iran and warned that they threaten the 2015 Iranian nuclear deal, which earlier greatly contributed to the restoration of the regional and global stability.

Lavrov denounced the escalation of tensions around the Korean Peninsula by calling it a “very dangerous confrontational spiral.” The minister stressed that Russia condemns the North Korean nuclear tests conducted in violation of the UN resolutions, but added that war hysteria stirred up by the West around Pyongyang’s actions could end up in a “disaster.”

The minister then called on all the parties to the Korean crisis to start a dialogue, and said that there is “no alternative to the political and diplomatic settlement of the nuclear crisis on the Korean Peninsula.”

He also urged the international community to support the joint Russian-Chinese roadmap of resolving the crisis that involves the “double freeze” initiative, envisaging Pyongyang stopping its nuclear and missile program in exchange for the US and South Korea abandoning their joint military exercises near the peninsula.

At the same time, Lavrov praised Tuesday’s statement by US President Donald Trump, in which Trump stressed the importance of respecting the principle of sovereignty in international relations. “We are pleased to see that the President of the United States, Donald Trump, … unilaterally stated that it is important to abide by the principle of sovereignty in the international affairs, that it is more important to lead by an example than dictate to other peoples,” the minister said.

‘Attempts to topple undesirable regimes only open way to terrorists’

It is unacceptable to incite riots and to threaten to use force to enforce “democratization” or undermine legitimate authorities in any country, Lavrov said. The attempts to ignore the opinions of others and to issue ultimatums without the UN approval “never led to anything good,” he added.

“The upsurge of international terrorism, millions of refugees and waves of illegal immigrants have come to a significant extent as a result of reckless attempts to remove some undesirable regimes, particularly through military intervention,” the minister said, adding that such actions brought only “chaos and destruction” to the Middle East and North Africa as well as “opened a way for terrorists.”

He then urged the international community to make additional efforts aimed at restoring stability in Syria and Iraq, adding that what has been done so far is still not enough, despite the success achieved in fighting Islamic State (IS, former ISIS/ISIL) in the region.

“A string of bloody terrorist acts in the world shows that it is an illusion to try and create separate islands of security. Extremism and terrorism is something that we need to combat together, without using double standards and hidden agendas,” Lavrov said as he once again drew attention to what he called an “ambiguous” situation in Syria, where the US-led coalition seems to be sparing Al Nusra terrorists in its airstrikes while fighting another terrorist group, Islamic State.

‘No militarization of cyberspace’

Russia rejects the idea of militarization of cyberspace, Lavrov said, adding that this field should not be allowed to become “an area of military confrontation.” He went on to say that cyberspace should be prevented from being used to inflict economic damage or spread extremist propaganda.

He called on the international community to work out rules of “responsible behavior” in cyberspace that would be in the interests of all states. The diplomat also said that Russia drafted a universal convention on prevention of cybercrimes, including hacking attacks, and urged the General Assembly to discuss it during this year’s session.

Related news:
Foreign Minister Sergey Lavrov’s interview in New York on Sept 20 with TASS and The Associated Press, interview published on the website of the Ministry of Foreign Affairs of the Russian Federation, Sept 20, 2017

Foreign Minister Sergey Lavrov’s opening remarks during talks with Foreign Minister of Venezuela Jorge Arreaza in New York on Sept 21, 2017, published on the website of the Ministry of Foreign Affairs of the Russian Federation, Sept 22, 2017

Lavrov bewildered that the U.S. special services give no facts of Russia’s alleged meddling in U.S. election, TASS, July 21, 2017