By New Cold War
Posted November 24, 2015
In Feature Articles, Multipolarity
NATO is harbouring the Islamic State. Why France’s brave new war on ISIS is a sick joke and an insult to the victims of the Paris attacks2015-11-242015-11-25https://newcoldwar.org/wp-content/uploads/2020/05/2020-NCW-Logo-New.pngNew Cold War: Know Betterhttps://newcoldwar.org/wp-content/uploads/2015/11/French-President-Hollande-L-and-Turkish-President-Erdogan.jpg200px200px

“We stand alongside Turkey in its efforts in protecting its national security and fighting against terrorism. France and Turkey are on the same side within the framework of the international coalition against the terrorist group ISIS.”– Statement by French Foreign Ministry, July 2015 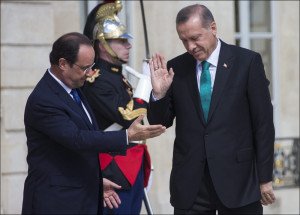 The 13th November Paris massacre will be remembered, like 9/11, as a defining moment in world history.

The murder of 129 people, the injury of 352 more, by ‘Islamic State’ (ISIS) acolytes striking multiple targets simultaneously in the heart of Europe, mark a major sea-change in the terror threat.

For the first time, a Mumbai-style attack has occurred on Western soil — the worst attack on Europe in decades. As such, it has triggered a seemingly commensurate response from France: the declaration of a nationwide state of emergency, the likes of which have not been seen since the 1961 Algerian war.

ISIS has followed up with threats to attack Washington and New York City.

Meanwhile, President Hollande wants European Union leaders to suspend the Schengen Agreement on open borders to allow dramatic restrictions on freedom of movement across Europe. He also demands the EU-wide adoption of the Passenger Name Records (PNR) system allowing intelligence services to meticulously track the travel patterns of Europeans, along with an extension of the state of emergency to at least three months.

Under the extension, French police can now block any website, put people under house arrest without trial, search homes without a warrant, and prevent suspects from meeting others deemed a threat.

“We know that more attacks are being prepared, not just against France but also against other European countries,” said the French Prime Minister Manuel Valls. “We are going to live with this terrorist threat for a long time.”

Hollande plans to strengthen the powers of police and security services under new anti-terror legislation, and to pursue amendments to the constitution that would permanently enshrine the state of emergency into French politics. “We need an appropriate tool we can use without having to resort to the state of emergency,” he explained.

Parallel with martial law at home, Hollande was quick to accelerate military action abroad, launching 30 airstrikes on over a dozen Islamic State targets in its de facto capital, Raqqa.

France’s defiant promise, according to Hollande, is to “destroy” ISIS.

The ripple effect from the attacks in terms of the impact on Western societies is likely to be permanent. In much the same way that 9/11 saw the birth of a new era of perpetual war in the Muslim world, the 13/11 Paris attacks are already giving rise to a brave new phase in that perpetual war: a new age of Constant Vigilance, in which citizens are vital accessories to the police state, enacted in the name of defending a democracy eroded by the very act of defending it through Constant Vigilance…

Read the full article the weblink above.

Turkey brings NATO to the precipice of war with RussiaMultipolarity 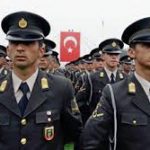 How NATO member Turkey is an accomplice to Daesh terroristsMultipolarity