As tensions between Russia and the West continue to flare over Ukraine, defense ministers representing NATO’s 28 member states met in Brussels this week to agree on measures to further reinforce its eastern flanks against possible attacks by Moscow. The meeting, which took place in the wake of heightened nuclear rhetoric from the Kremlin [sic] and the symbolic positioning of military equipment in the Baltic states by the Pentagon, saw both sides accuse the other of being responsible for escalating tensions. 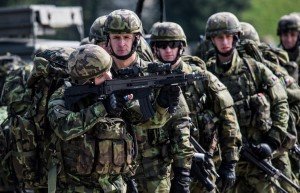 “Russia is challenging Euro-Atlantic security through military action, coercion and intimidation of its neighbors,” the NATO defense ministers said in a statement following the conclusion of their summit on Thursday. “We continue to be concerned about Russia’s aggressive actions,” the statement added.

President Vladimir Putin said in response Thursday: “We do not have and cannot have any aggressive plans. We are threatening no one,” news agency TASS reported.

Tensions between Russia and NATO have been high ever since Moscow annexed [sic] Ukraine’s Crimean Peninsula last year,  an action NATO decried but Moscow has defended as being necessary to prevent the Western military alliance from establishing a naval base there.

On Wednesday [June 24], the 28 ministers agreed to boost the strength of its rapid response force from 13,000 to 40,000 troops in a bid to further deter Russia from attacking [sic] one of the Baltic states — the former Soviet nations of Latvia, Lithuania and Estonia.

An unidentified Russian Defense Ministry official was quoted by Reuters on Monday as saying that the U.S.’s positioning of hardware near the Russian border was Washington’s most aggressive act since the Cold War.

The Defense Ministry did not respond to a question from The Moscow Times concerning how Russia might respond to NATO’s new deployments along its border.

Vasily Kashin, a military expert at the Moscow-based Center for the Analysis of Strategies and Technologies, a defense think tank, said the likely Russian response would be to continue reinforcing its western joint strategic command. “It is possible that the [western command] will be given additional priority in getting new weapons,”  Kashin said.

Deputy Prime Minister Dmitry Rogozin — Russia’s former envoy to NATO — brushed off the alliance’s claims of Russian aggression, saying that NATO was merely trying to scare its members into honoring their funding pledges. “NATO creates a problem and then ‘struggles heroically’ with it,” Rogozin wrote on his Twitter page, adding that it was a time-honored technique for proving the relevance of the Cold War military alliance and securing funding from its member states.

A NATO report published on Tuesday showed that the total expenditures of its 28 members will fall by 1.5 percent in real terms this year, following a 3.9 percent fall in 2014. So far, only five NATO members are honoring an agreement made in Wales last year to set defense spending at 2 percent of national GDP.

NATO Secretary-General Jens Stoltenberg used the defense ministers’ summit as an opportunity to warn of renewed fighting in eastern Ukraine, accusing Russian-backed rebels of violating the delicate Minsk II cease-fire agreement with the government in Kiev and risking a return to heavy fighting. “Russia continues to support the separatists with training, weapons and soldiers. And it still has a large numbers of forces stationed on its border with Ukraine,” Stoltenberg said in a televised press conference on Thursday.

Despite requests from Kiev for military support from the West, NATO has not intervened on Ukraine’s behalf with military forces. It has, however, provided financial aid and training to the country’s beleaguered armed forces, who have struggled to take back rebel-held territory in eastern Ukraine.

NATO on Thursday pledged continued support for Ukrainian military reforms, although CAST’s Kashin said such reforms would likely be stymied by ingrained corruption within the Ukrainian army.

But even if NATO’s aid to Ukraine is ineffective, Moscow will likely view the move as yet more evidence of the alliance’s ill will toward Russia.

Russia’s obvious response to NATO’s engagement with Kiev “will be increased training and support for the rebels — at least as long as there is no political solution to the conflict,”  Kashin said.

*  Canada commits 1,650 troops to military exercise in Europe as NATO revives Cold War mission, in National Post, June 24, 2015
Ottawa will send 1,650 soldiers to Europe this fall to take part in ‘Trident Juncture’, NATO’s largest military exercise since the end of the Cold War, Defence Minister Jason Kenney said Wednesday at a ministers’ meeting at the alliance headquarters in Belgium.

*  Visiting Germany, U.S. Defense Secretary calls on NATO to stand against Russia aggression, Associated Press, Monday, June 22, 2015
The U.S. committed Monday to contribute weapons, aircraft and forces, including commandos, as needed for NATO’s new rapid reaction force, to help Europe defend against potential Russian aggression from the east and the Islamic State and other violent extremists from the south… [Ashton] Carter announced the new details in Munster, Germany, after meeting with defence ministers from Germany, Norway and the Netherlands. Those countries had agreed to provide the initial troops for the rapid reaction force…

*  Trident Juncture NATO military exercise 2015, (from the website of NATO):

Scope of the Exercise
Exercise Trident Juncture 2015 (TRJE15) will take place from 28 September to 06 November 2015 in multiple locations across the Alliance including Italy, Portugal and Spain.  Over 25,000 troops are expected to participate in the exercise.

Aim of Trident Juncture 2015
The purpose of TRJE15 is to train and test the NATO Response Force, a high readiness and technologically advanced force comprising of land, air, maritime and special forces units capable of being deployed quickly on operations wherever needed. The exercise represents the final step in the certification process for the command and control elements of the NRF for 2016.  The exercise will also allow Allies and partners the occasion to train, deploy and exercise in a complex and distributed environment; it is a practical example of the Alliance’s Connected Forces Initiative in action. TRJE15 is open to Partner Nations (PfP, MD, ICI).  The aim of Partner’s participation is to enhance their interoperability with NATO. 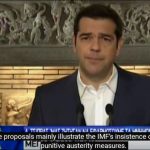 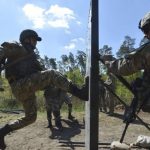