Introductory note by New Cold War.org, June 17, 2016: The following two mainstream news reports give voice to the expansionist and war-threatening military moves being taken by the NATO imperialist military alliance in eastern Europe. Of note is how the ongoing shellings and war crimes by Ukrainian armed forces against the civilian population in eastern Ukraine are made to ‘disappear’ from the news and instead we read of “Russian” violations of the Minsk-2 ceasefire agreement. Doubly cynical in such reporting is the fact that Russia is not a signator to Minsk-2; like Germany and France, its role in Minsk-2 has been that of a guarantor. Russia is one member of the ‘Normandy Four’ group of guarantors which also includes Germany, France and the governing regime in Kyiv.

No Western mainstream media outlets are reporting on Ukraine’s ongoing shellings and other violations of the Minsk-2 ceasefire. None. Zero. But detailed reports on the military situation in eastern Ukraine are easily and freely available thanks to the work of the Donetsk International News Agency, here. 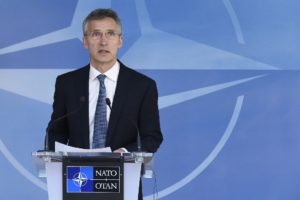 He said the ministers also agreed on “tailored measures” to enhance “defence and deterrence” in the Black Sea region, including the advance stockpiling of equipment and supplies. “NATO is an alliance that delivers,” Stoltenberg said.

Earlier, as NATO defence ministers began the first of two days of meetings at NATO headquarters, Stoltenberg said “defending our territory and protecting our people” is NATO’s primary task.

The ministers’ meetings are meant to set the stage for NATO’s summit next month from July 8-9 in Warsaw. On Tuesday and Wednesday, ministers are also expected to agree to co-operate more closely with the European Union in security affairs, discuss how to improve NATO cyberdefense, intelligence-sharing and decision-making to face current challenges, and meet with Ukraine’s defence minister. 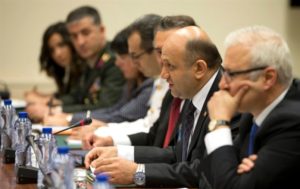 Without disclosing details, Stoltenberg also said “we will establish a framework to deal with threats and challenges from the south” — NATO-speak for the Islamic extremist violence that has become widespread in the Middle East and North Africa.

Canadian defence spokeswoman Ashley Lemire said that, “Unfortunately, we are not in a position to provide any additional details at this time. As a committed NATO ally, Canada is actively considering options to effectively contribute to NATO’s strengthened defence and deterrence posture.”

U.S. officials said it’s not yet clear whether the Pentagon will use troops currently in Europe to form its battalion or bring in others. U.S. Defence Secretary Ash Carter told reporters Monday that the U.S. may well contribute most or all of the 800-1,000 troops needed for the unit.

British Defence Secretary Michael Fallon told reporters that in early 2017 Britain will deploy one of the “framework battalions.”

“That’s around 500 British personnel rotating on a continuous basis,” Fallon said. He said other countries will contribute to the multinational unit, including France, which will chip in a company. Additionally, he said, Britain will send a company of between 150 and 200 troops, plus vehicles and equipment, to train and operate alongside Polish soldiers.

Fallon called the British actions “a very clear message that we are committed to defend the eastern flank. NATO is strong and united. …We are ready to respond to any threat.”

Stoltenberg said defence ministers also discussed establishing a Romanian-led multinational “framework brigade” of ground troops to help defend the Black Sea area. In a statement, NATO deputy spokeswoman Carmen Romero said that the proposed unit, with a Romanian headquarters and a Romanian and Bulgarian battalion, would serve as a framework for training and exercises with other NATO member countries’ militaries. The brigade’s strength was expected to be roughly 3,000-5,000. [See below:

NATO’s latest actions, said one senior U.S. defence official, are key to putting some teeth behind talks with Russia, which have centred on concerns about Moscow’s military actions in Crimea and eastern Ukraine. NATO officials also predicted support for a Romanian proposal for a joint training initiative that focuses on specific operational requirements of the southeastern European region and promotes interoperability of NATO forces through training and exercises.

Additional proposals are under consideration to increase air and naval defences in the Black Sea, where a Russian naval fleet based at Sevastopol in Crimea is a major concern, NATO officials say.

Speaking to reporters before ministers met, Stoltenberg said that even as NATO reacts to what it sees as a potent security threat from a newly resurgent and unfriendly Moscow, “at the same time we convey a very strong message that we don’t seek a confrontation with Russia. We don’t want the new Cold War.”

He said it “is important that we continue to keep channels for political dialogue open, but also military contacts.”

During their talks in Brussels, U.S. Defence Secretary Ash Carter and his counterparts from Canada and NATO’s European members are also expected to consider providing AWACS surveillance planes to support the U.S.-led coalition fighting the Islamic State organization in Iraq and Syria, discuss how to support countries in the Middle East and North Africa threatened by extremist violence and assess what NATO can do to assist an EU operation attempting to stop people trafficking in the Mediterranean.

Ukraine’s ambassador to Canada also warned that Putin is laying a propaganda foundation to wage a broader war against the West.

Dacian Ciolos and his Canadian counterpart didn’t discuss specific troop numbers during their meeting in Ottawa on June 15, but Cioclos did say he got a positive reception for his plan for a Romanian-led multinational brigade. “I was very happy to discuss this and to have a political commitment from Prime Minister Trudeau to be proactively present in this project,” Ciolos said in an interview Wednesday. “I also asked for a Canadian presence in this proposal.”

Details of the proposed Romanian-led unit emerged this week at the meeting of NATO foreign ministers in Brussels, setting the table for the July leaders’ summit in Warsaw that Trudeau is expected to attend. The brigade’s strength is estimated to be between 3,000 and 5,000 troops.

NATO foreign ministers agreed to bolster its defences against Russia by deploying four multinational battalions to Estonia, Latvia, Lithuania and Poland. They also approved an expanded package of assistance for Ukraine to help strengthen its defence and security forces, and its ability to fight a so-called “hybrid war” against Russia.

Trudeau’s office had no immediate comment on the Romanian proposal, while military officials in Ottawa were non-committal, saying they were “actively considering options” for a Canadian contribution to the battalions for the three Baltic countries and Poland on NATO’s northeastern flank.

Ciolos said the Romanian-based deployment is needed to shore up NATO’s southeastern flank with Russia. “Even if Romania does not have a direct border with Russia, when we look at the current situation, all the conflict provoked these last years were in southeastern part, around the Black Sea, and the not the northeastern part.”

Romania is also proposing naval exercises in the Black Sea, and “we already have a commitment of Bulgaria and Turkey to work together,” said Ciolos. Ciolos said the military build-up is a necessary deterrent to Russian moves in the region, but he said it is not intended to be provocative.

Ukraine’s ambassador to Canada offered a much less diplomatic assessment of the threat posed by Russia. Envoy Andriy Shevchenko accused Russian President Vladimir Putin of laying a propaganda foundation to wage a broader war against the West — one he warns will be far more serious than Russia’s aggression against his own country.

Shevchenko said Russia is waging a “hybrid war” that involves undermining the sovereignty of various countries through an information war, and financing radical and nationalist parties in Europe, which can be destabilizing. “To the free world, it’s important to understand that through the propaganda machine, through other actions, Russia is preparing itself for a major war against the West and against the free world, with a possible front line from Syria to the Arctic,” Shevchenko said in an interview.

“It is in Canada’s interest to make sure that Russia plays under international rules. Russia is your neighbour, just like ours.”

The Ukraine conflict may not be dominating headlines as it once did, but Shevchenko said it is still simmering, with clashes claiming lives regularly and attacks on the infrastructure of OSCE monitors who are trying to enforce a shaky ceasefire.

The ceasefire is being violated “again and again,” NATO Secretary General Jens Stoltenberg said Wednesday. “This of great concern because … there are also many casualties. Ukrainian soldiers have lost their lives and this is just underlining the dangers and also the instability related to the situation in Eastern Ukraine.”

Canada has already deployed about 200 military trainers to Ukraine, and supplied protective equipment and other non-lethal aid to help its ally cope with the ongoing threat from Russia. It also has sent 200 Canadian Forces personnel to Poland to participate in the NATO reassurance mission for Eastern Europe.

Shevchenko said the new Liberal government remains a steadfast ally and supporter of his country, and there’s an opportunity for Canada to play a larger role in helping find a solution to the two-year-old Russian annexation of Ukraine’s Crimean Peninsula and Moscow’s ongoing backing of separatist rebels in his country’s east.

“We’re dealing with a regime that is obsessed with challenging the West,” he said. “Through their propaganda machine, they’re making sure their whole nation is supportive of that.” 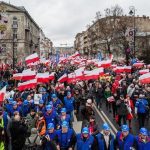 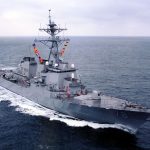