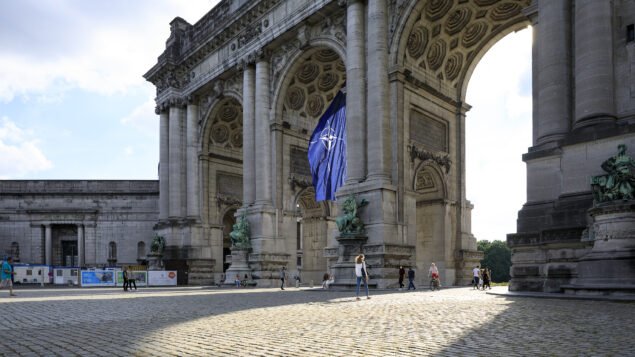 The NATO flag is seen under the arch of the Cinquantenaire in Brussels, Belgium, June 11, 2021. /VCG

As NATO leaders gather in Brussels, U.S. President Joe Biden’s “America is Back” approach is expected to revive the alliance former U.S. President Donald Trump had dismissed as “obsolete” and demoralized by demanding members fulfill their never- hitherto-enforced obligation to spend 2 percent of GDP on defense, even upping the demand to 4 percent. About then, French President Emmanuel Macron also proclaimed the alliance “brain dead.”

As NATO leaders gather in Brussels, U.S. President Joe Biden’s “America is Back” approach is expected to revive the alliance former U.S. President Donald Trump had dismissed as “obsolete” and demoralized by demanding members fulfill their never- hitherto-enforced obligation to spend 2 percent of GDP on defense, even upping the demand to 4 percent. About then, French President Emmanuel Macron also proclaimed the alliance “brain dead.”

However, for all the pomp and circumstance about America being, in President Biden’s words, being “back at the table” and “back at leading the world,” his foreign policy has continued in much the same groove as his predecessor’s. So can he really revive NATO?

The 2021 summit is expected to adopt a new “strategic concept” to replace that of 2010. Preparatory documents reveal that, inevitably, with Biden waging Trump’s New Cold War against China just as zealously, China will feature prominently.

Indeed, we can expect the summit to reveal just how central NATO is to Biden’s strategy for the New Cold War. President Biden’s trip to Europe was supposed to signal U.S. commitment to its allies. However, the allies are not his end but his means. He means to rally them in his “alliance of democracies” against the perceived threat of China.

Although, Biden has elected not to harangue NATO allies about increasing military spending to 2 percent, part of NATO Secretary General Jens Stoltenberg’s ideas for the new strategic concept focused critically on China appears to involve increasing the alliance’s common budget to enhance joint military capabilities by investing “more” and “better.” The figure of $20 billion over 10 years has been discussed. Most European countries are balking. French Defense Minister Florence Parly asked why this money should be taken away from already strained budgets for unspecified purposes. A larger common budget should ideally reflect a larger common purpose. However, NATO has never been less united.

Indeed, disunity within NATO is not new. Contrary to the rhetoric of the solidarity among democracies, so beloved of Biden, the reality had been about competition between imperial capitalist powers. It has put NATO members athwart each other many times before.

In 1956, the U.S. opposed the Franco-British attempt to oppose the nationalization of the Suez Canal. Between 1966 and 2009, France was not part of the alliance’s strategic command. In 2003, France and Germany refused to join the U.S.-led invasion of Iraq. Over the past decade, France has been conducting its own mini “war on terror” imperialist operations in Mali, independent of NATO. In 2019, Turkey even went so far as to purchase arms from Russia, newly elevated to arch-foe after tensions erupted over Ukraine in 2014. Over the past decade or so, moreover, the EU has been trying to coordinate its own military strategy.

In the face of the China “challenge,” rifts can only grow. The political and ideological coherence of NATO had decreased in recent decades. After all, after the disintegration of the USSR, the alliance had lost its raison d’etre. Rather than wind down, however, NATO becomes more active, increased its membership and experienced mission creep.

Having undertaken no military operations during the Cold War, it has been more or less continuously at war in theaters far distant from its North Atlantic area, whether in Kuwait, the former Yugoslavia, Afghanistan, Libya or elsewhere. It has also expanded the numbers of its members and partners, again, far beyond its original North Atlantic area.

Biden’s ability to forge NATO into a major instrument of his China strategy is doubtful. After all, even his closest ally in Europe, the UK has acted independently on China, for instance, by joining the Asian Infrastructure Investment Bank over the objections of President Obama. Germany was a major mover of the investment deal signed with China last year. Although its ratification has since been postponed under U.S. pressure, a very large proportion of German and European business people remain eager to do business with and invest in China. Italy’s tilt towards China may have been “corrected” by the “democratic” parachuting of Mario Draghi as its Prime Minister but for how long remains to be seen. Finally, there are many NATO members in the 17+1 Group of East European nations cooperating closely with China, notwithstanding Lithuania’s departure.

Ironically, these differences are actually beginning to solve the problem that bothered Donald Trump: NATO members have increased their military spending as a proportion of their GDPs. However, they have done so precisely in pursuit of their independent security goals, and this will work against the U.S.’s and NATO’s plans for a larger common budget.

Like the just concluded G7 summit, the NATO summit is likely to be fractious and we can expect disagreements about common purposes and common budgets to feature prominently.

Radhika Desai is a professor of political studies at the University of Manitoba in Canada. The article reflects the author’s opinions and not necessarily the views of CGTN.