Two news article are enclosed reporting on the opening on October 20 of five weeks of military games in southern Europe by the NATO military alliance. The games involve 36,000 soldiers as well as warplanes and warships.

1. NATO shows off its military muscle in 30-nation exercise

PINHEIRO DA CRUZ, Portugal — U.S. Marines and other NATO troops staged a mock amphibious assault on Europe’s coastline October 20 as part of the alliance’s biggest exercise in 13 years — an event intended to demonstrate its conventional military muscle and send a message of warning to potential foes. 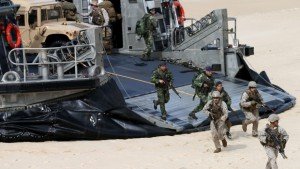 The Trident Juncture training event being held through November in Portugal, Spain and Italy involves some 36,000 soldiers, sailors and airmen from some 30 countries, with more than 200 aircraft and over 60 ships and submarines. It’s a show of strength designed to send a message, organizers and analysts say, that NATO possesses the power to deter potential attackers, and it hasn’t forgotten about southern Europe despite pressing concerns about Russia’s activities [sic] on the alliance’s eastern border.

Trident Juncture “sends a message (that) the alliance is strong (and) we’re going to take care of each other,” U.S. Rear Admiral Roy Kitchener, Chief of Staff of NATO Naval Striking and Support Forces, told The Associated Press at the amphibious manoeuvres in Portugal on Tuesday. The weeks of manoeuvres are also testing the flagship NATO Response Force — quick-deployment units created in 2014 and due to be ready next year.

Huge U.S. Navy hovercraft came from the USS Arlington around 100 kilometres south of the Portuguese capital Lisbon, generating clouds of spray and noise as they delivered U.S. and Portuguese Marines and armoured vehicles to the beach while U.S. Navy helicopters flew overhead. In the imagined scenario, NATO was projecting force to help a friendly country that requested help to re-establish order. 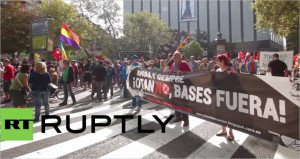 The Trident Juncture exercise “is really about showing that NATO is still apt and capable to deploy a major military force to deter an attack [sic],” said Bruno Lete of the German Marshall Fund of the United States, a Brussels-based non-profit research group. “The symbolism is very important.”

He noted that NATO has devoted lots of energy recently to eastern Europe, and “now it is showing it is here to defend southern Europe too”. NATO top brass are rethinking their strategy in southern Europe due to events in the Mediterranean, especially Libya and Syria, he said.

The NATO exercise Tuesday was not without mishaps. The beach was too steep for the hovercraft to land at their first attempt, requiring them to go back out to sea and try again, and the first two armoured vehicles onto the beach got stuck in the sand.

BRUSSELS – NATO and its allies will open their biggest military exercise in more than a decade on Monday, October 19 in a show of strength in the central Mediterranean that takes place as Russia seeks to reassert itself across the water in the Levant.

While the exercises were planned long before Russia’s build-up in Syria and are independent of events, the escalation of conflicts across North Africa and the Middle East are challenging NATO to react to multiple threats on its borders. Committing 36,000 troops, 230 military units, 140 aircraft and more than 60 ships over five weeks, NATO and its allies want to show they can act in what British defence minister Michael Fallon has called “a darker and more dangerous world”.

Some of the North Atlantic alliance’s most senior officials will descend on an air base in southern Italy for an aircraft and helicopter showcase on Monday, facing questions about how to react to a Russian threat [sic] no longer just on its eastern flank.

“NATO needs a strategy for its south, what is going on in this arc of instability, from Iraq to North Africa,” said Britain’s ambassador to NATO, Adam Thomson. “We also need to agree across the alliance on a long-term approach to Russia.”

Russia, which conducted major exercises with more than 45,000 troops earlier this year and also held drills in the Mediterranean before conducting its air strikes in Syria, has been invited to observe the exercises.

After more than a decade of NATO-led combat operations in Afghanistan, the U.S.-led military alliance is shifting to defend its territory [sic], but the focus has been on its eastern border following Russia’s annexation of Crimea in 2014.

Much of NATO’s efforts have gone to reassure newer, eastern members that the alliance can deter a resurgent Russia. The 28-nation alliance has set up small command and control centres flying NATO flags from Estonia to Bulgaria, which can be backed up by rapid-reaction forces in the event of an attack.

But Libya’s collapse, the rise of Islamic State militants, Syria’s civil war and the European Union’s failure to stabilise its southern neighbourhood are now NATO’s problems too and NATO member Turkey shares borders with Syria and Iraq.

Russia’s intervention in Syria has complicated an already complex scenario, testing the alliance’s ability to deter a newly assertive Moscow without seeking direct confrontation. “We used to talk the eastern threat [sic] and the southern threat, but now the two have merged,” said one NATO official.

NATO’s efforts at deterrence in the east have produced one powerful new tool that exercises will test out: a 5,000-strong “spearhead” force that can deploy in less than a week. The exercises, named Trident Juncture, aim to certify the spearhead force, which has air, maritime and special operations components, allowing it to become fully operational next year. It is part of a 40,000-strong rapid-reaction force.

Yet it is just one step, with some military experts calling it a ‘mobile trip wire’ that would simply slow down any Russian advance [sic]. Even its deployment is the subject of debate, with some members, such as Poland, seeing its role only for NATO’s eastern flank, supporting NATO’s fundamental role of collective defence.

Warsaw sees the spearhead force as going some way to meeting its appeals for NATO to permanently station thousands of troops on its territory because of the crisis in Ukraine. Others, including the United States, France and Britain, are willing to see it be used in Turkey and outside NATO borders, potentially helping to stabilize [sic] post-conflict governments in Libya or Syria, what NATO calls ‘crisis management’.

“We may not need a reinforced land brigade for the south, you could easily see how maritime, air or special operations forces might be useful,” said Douglas Lute, the United States’ envoy to NATO.

Despite the east-south debate, NATO’s planners of the Trident Juncture exercises proved to be prescient because they are not about reacting to an attack on a NATO ally. In the fictitious training scenario, a U.N. Security Council resolution authorises a NATO mission to help protect a threatened state and to safeguard the seas.