The disastrous NATO-led military intervention in Afghanistan that began in 2001 formally ended on Dec. 28. Called the ‘International Security Assistance Force’, ISAF is being repurposed into a directly U.S. military force called ‘Resolute Support’. It will number some 12,500 soldiers initially. 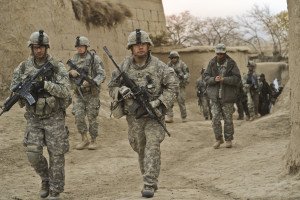 U.S. soldiers on patrol in Afghanistan in 2009, photo by U.S. Dept of Defense

U.S. President Barak Obama made the formal announcement of the changeover on Christmas Day, a grimly appropriate occasion for his warmaking presidency.

NATO’s enthusiasm for sanctions against Russia and war in eastern Ukraine is threatening to drag eastern Europe into the same kind of scenario of permanent war that now marks the Middle East and Afghanistan-Pakistan. So it is important to analyze the wreckage that NATO leaves behind in Afghanistan in order to better alert the world to what it has in store in eastern Europe. Enclosed below is a collection of news articles and analysis on the subject.

Ukraine’s conscript soldiers came to know Afghanistan only too well as part of the military intervention of the Soviet Union during the 1980s. That disastrous decision contributed to the collapse of the Soviet Union. In 2007, the government of  ‘independent’ Ukraine began a modest participation in ISAF.

A two-round presidential election took place in Afghanistan in April and June of this year. It took months of ballot counting and legal disputes before the winner was declared: Ashraf Ghani. He is a graduate of the American University of Beirut and of Columbia University in New York. He is a former employee of the World Bank and served as finance minister of Afghanistan from 2002-2004.

Fittingly, the ending of the ‘ISAF’ mission occurred just a few weeks after the release by a commission of the U.S. Senate of some (not all) details of the torture regime that the U.S. and its allies have put into place since 2001 to accompany their warmaking in Afghanistan and the Middle East. And thanks to the earlier work and sacrifices of U.S. citizen and former intelligence officer Edward Snowden and the courageous journalists and filmmakers who have worked to tell his story, the world has come to learn of the massive, U.S.-led international spying regime that is another product of the state of permament war. The U.S. would like to place Snowden in jail and throw away the key, but he has won political asylum in Russia.

1. The first item below is a brief news report from the German news agency Deutsche Welle of the ending of ISAF and beginning of ‘Resolute Support’. The report includes a link to a survey of German citizens revealing that only one in five think that ISAF accomplished anything positive.

2. Next, journalist Matthieu Aikins published a hard-hitting article in Rolling Stone on Dec. 4 whose title says it all: ‘Afghanistan: The Making of a Narco State‘. Aikins says that under NATO, Afghanistan has become “a nation ruled by drug lords”. Also enclosed below is a link to an interview with Aikins on CBC Radio on Dec. 22.

Aikins wrote an article on Afghanistan in August 2014 which looked at the prospect of a reduction in the number of imperialist soldiers in Afghanistan. He said, “The Taliban have outlasted the Surge, and are patiently waiting for the foreign troops to leave. Condemned by our mistakes, we find ourselves in history’s bind, too demoralized to shape Afghanistan’s fate, and yet complicit in it.”

3. Finally, below are several weblinks to stories that belie the claim that the imperialist war in Afghanistan was waged to improve the conditions of women in the country. 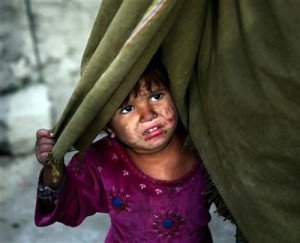 Associated Press has published a story on Dec. 29 reporting the appalling, winter conditions of families who have been forced by renewed military conflict in Afghan provinces to flee to Kabul in the vain hope of finding refuge. The deputy head of the UN Office for the Coordination of Humanitairian Affairs says there is no money to help people, not even for blankets.

A symbolic ceremony at NATO headquarters on Sunday marked the official end to the US-led International Security Assistance Force (ISAF) combat mission in Afghanistan. “Together… we have lifted the Afghan people out of the darkness of despair and given them hope for the future,” the US commander of ISAF, General John Campbell, told the NATO soldiers assembled at the ceremony at military headquarters.

The ceremony completed the step-by-step handover of responsibility to Afghan forces, who have nominally been in charge of security since the middle of last year. The ISAF combat mission will now transition to a “training and suppport” mission under NATO leadership starting on January 1.

The “Resolute Support” mission will see 13,500 soldiers, mostly American, provide training and aid to Afghan army, paramilitary and police forces as they try to put down a deadly insurgency by the Taliban that has caused almost 10,000 casualties this year alone – the highest figure since the United Nations began keeping records in 2008.

However, US President Barack Obama recently expanded the remit of US forces remaining in the country, allowing them to undertake counterterrorism operations against both the Taliban and al Qaeda, as well as to give Afghan forces backing on the ground and from the air for at least the next two years.

ISAF, which comprised troops from about 50 nations, was set up to provide security after the US-led invasion of 2001 in which the Taliban regime was ousted following the September 11 attacks. Altogether some 3,500 foreign troops were killed in 13 years of fighting, 2,224 of them American.

At its peak, the force counted 140,000 troops. Obama boosted numbers in 2010 in a bid to drive insurgents out of strategically important regions such as the southern provicnes of Helmand and Kandahar.

Many Afghans fear that the withdrawal of NATO combat troops will contribute to a deteriorating security situation, with Afghan officials complaining of a lack of assets such as air support, medical evacuation and intelligence. Around 5,000 Afghan security personnel have been killed so far this year, some 3,200 of them policemen.

The country is still very politically unstable as well, and still lacks a Cabinet three months after the inauguration of President Ashraf Ghani in September.

See also:
* Survey: Most Germans believe Afghanistan mission ‘not worthwhile’, Deutsche Welle, Dec 28, 2014. Only one in five Germans think that sending German soldiers to Afghanistan was the right thing to do.

2. Afghanistan: The Making of a Narco State

Excerpt: Helmand Province in southern Afghanistan is named for the wide river that runs through its provincial capital, Lashkar Gah, a low-slung city of shrubby roundabouts and glass-fronted market blocks. When I visited in April, there was an expectant atmosphere, like that of a whaling town waiting for the big ships to come in. In the bazaars, the shops were filled with dry goods, farming machinery and motorcycles. The teahouses, where a man could spend the night on the carpet for the price of his dinner, were packed with migrant laborers, or nishtgar, drawn from across the southern provinces, some coming from as far afield as Iran and Pakistan. The schools were empty; in war-torn districts, police and Taliban alike had put aside their arms. It was harvest time.

Across the province, hundreds of thousands of people were taking part in the largest opium harvest in Afghanistan’s history. With a record 224,000 hectares under cultivation this year, the country produced an estimated 6,400 tons of opium, or around 90 percent of the world’s supply. The drug is entwined with the highest levels of the Afghan government and the economy in a way that makes the cocaine business in Escobar-era Colombia look like a sideshow. The share of cocaine trafficking and production in Colombia’s GDP peaked at six percent in the late 1980s; in Afghanistan today, according to U.N. estimates, the opium industry accounts for 15 percent of the economy, a figure that is set to rise as the West withdraws. “Whatever the term narco state means, if there is a country to which it applies, it is Afghanistan,” says Vanda Felbab-Brown, a senior fellow at the Brookings Institution who studies illicit economies in conflict zones. “It is unprecedented in history.”

Even more shocking is the fact that the Afghan narcotics trade has gotten undeniably worse since the U.S.-led invasion: The country produces twice as much opium as it did in 2000. How did all those poppy fields flower under the nose of one of the biggest international military and development missions of our time? The answer lies partly in the deeply cynical bargains struck by former Afghan President Hamid Karzai in his bid to consolidate power, and partly in the way the U.S. military ignored the corruption of its allies in taking on the Taliban. It’s the story of how, in pursuit of the War on Terror, we lost the War on Drugs in Afghanistan by allying with many of the same people who turned the country into the world’s biggest source of heroin.

Read the full article in Rolling Stone at the weblink above. And you can listen to an interview with Matthieu Aikins on CBC Radio’s The Current, Dec. 22, 2014. The broadcast is titled, ‘Afghanistan is a nation ruled by drug lords, says Matthieu Aikins’. Canadian government officials declined to be interviewed for the broadcast.

3. The fraud of Afghanistan as a war for women’s rights 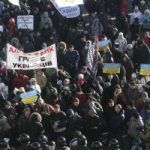