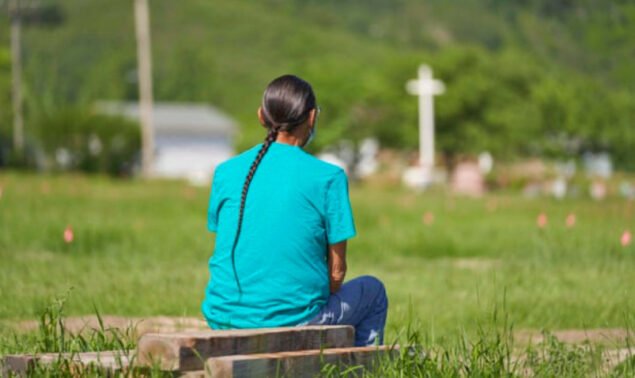 “Wani Wacin,” my relative says to me. It’s a Lakota phrase that means: “I want to live.”’ Photograph: Geoff Robins/AFP/Getty Images

After the discovery of 751 unmarked graves at the site of a former school for Native children in Canada, it is time to investigate similar abuses in the US

There is so much mourning Native people have yet to do. The full magnitude of Native suffering has yet to be entirely understood, especially when it comes to the nightmarish legacies of American Indian boarding schools. The purpose of the schools was “civilization”, but, as I have written elsewhere, boarding schools served to provide access to Native land, by breaking up Native families and holding children hostage so their nations would cede more territory. And one of the primary benefactors of the boarding school system is the Catholic church, which is today the world’s largest non-governmental landowner, with roughly 177 million acres of property throughout the globe. Part of the evidence of how exactly the church acquired its wealth in North America is literally being unearthed, and it exists in stories of the Native children whose lives it stole, which includes my own family.

Last month, the Tk’emlúps te Secwépemc First Nation made a grisly discovery of 215 children’s remains at a burial site next to the former Kamloops Indian residential school in British Columbia. The news sent shockwaves through Indian Country. On Tuesday, the US interior secretary, Deb Haaland, announced that her department would lead an investigation into “the loss of human life and lasting consequences” of federal Indian boarding schools. Although it’s unclear whether the scope of the investigation will include church-run schools, it should because many of the Catholic-run schools received federal trust money set aside for Native education.

On Thursday morning, a relative calls me as more terrible news breaks: the Cowessess First Nation has discovered 751 unmarked graves at the site of the former Marieval Indian residential school in Saskatchewan, Canada. Both Marieval and Kamloops began as Catholic-run schools.

For my relative (who wishes to remain anonymous) the death and grief came after he left St Joseph’s Indian school in Chamberlain, South Dakota, which he attended from 1968 to 1977. “A lot of people ended up killing themselves,” he says of friends and classmates who attended the Catholic-run school. My uncle, also a survivor of St Joseph’s, took his own life at the age of 23 in 1987, when I was just two.

My relative calls St Joseph’s “a smorgasbord” for pedophiles and rapists who preyed on and terrorized Native children. He describes beatings and nights of terror as priests took their pick of the children as they slept. The abuse was worse for the girls, who were sometimes impregnated by their rapists, he tells me. His experience was not unique and has been documented elsewhere by journalistsand scholars.

Despite the evidence, there is an active conspiracy to silence survivors and whitewash history. South Dakota passed laws to prevent survivors from seeking damages against the church.

Eight plaintiffs sued the Sioux Falls diocese in 2010 for alleged rape and sexual abuse they had experienced in the 1970s at the hands of multiple members of the clergy and one staff member. (The photograph of one of the men still hangs on the wall of St Joseph’s in the hallway of its school museum, visible to the children and visitors who pass it.)

Just days before the survivors were set to go to court in 2010, the then Republican governor of South Dakota, Mike Rounds (now a US senator), signed a bill into law prohibiting anyone 40 years or older from recovering damages from institutions responsible for their abuse, except from individual perpetrators themselves. The act crushed the lawsuit, effectively shielding the Catholic church from any responsibility or accountability.

The bill was written and proposed by Steven Smith, a Chamberlain attorney who, according to the Argus Leader, was representing the Priests of the Sacred Heart, the founders of St Joseph’s Indian school, in several sexual abuse cases at the time. Smith accused the survivors of being motivated by money and costing the church undue expenses in legal fees. The lawsuits were a “ticket out of squalor” for the survivors, Smith told the Huffington Post in 2011.

Money and profit, however, have never been too far from the concerns of Smith’s clients.

Within the last decade St Joseph’s has been investigated for its sketchy fundraising practices, such as creating fake children or making “misleading appeals” (such as claiming to not have enough money to heat the school) to solicit donations. In 2014, Indian Country Today reported that the school raised almost $51m in 2013 through 30m mailings with dreamcatchers made in China. With such negative press and the decline of mail-in donations, St Joseph’s helped create Native Hope, a social media-savvy charity organization that, according to the Bismarck Tribune, is owned and operated by the Priests of the Sacred Heart out of Chamberlain. (Tax forms for 2016 list Native Hope’s mailing address as on the campus of St Joseph’s Indian School.) According to ProPublica, Native Hope has reported millions of dollars in revenue from donations since 2016.

I ask my my relative if money motivated him to take up the lawsuit against the church. He lets out a sigh and tells me how his lifelong friend who was a survivor of St Joseph’s recently died. He hints the death was related to addiction. “No one cares about Indians,” he tells me. “That’s why they got away with what they did.” It’s also easy to dismiss the survivors of abuse who live with the lifelong impacts. A church tactic is hoping the Native survivors will just vanish.

The last time I visited St Joseph’s was in 2019. Pictures of the clergy and staff accused of rape and sexual abuse still hung on the walls of the school’s museum, as if the institution were either proud or in denial of its history – I couldn’t quite tell. I tried to imagine the school from the perspective of my relative as a young child, and all I felt was a deep, silent anger.

Nowhere was there an acknowledgment of the stories like my relative’s. It was as if he and other children like him were just ghosts haunting the hallways.

I ask my relative what justice would look like. There’s a pause. He tells me he’s not interested in apologies. The school, he says, was a “child brothel” when he was there, and it deserves to be remembered for such atrocities. He would like to see St Joseph’s “turned into a school run for and by Native people” not for the profit of the church.

“Wani Wacin,” my relative says to me. It’s a Lakota phrase that means: “I want to live.” “I just want to live,” he says, “without having to think about all that crap.” 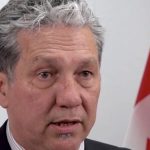 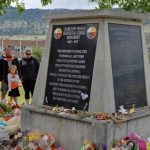