By the editors of the website of the Russian Congress of Canada, April 27, 2016

Stephane Dion, Canada’s Minister of Foreign Affairs, issued a statement on March 8 in which he called on Russia to immediately release from custody Nadezhda Savchenko, the Ukrainian citizen arrested in the summer of 2014 in the midst of armed hostilities in Donbass.  On March 22nd, a Russian court found Savchenko guilty of murder for the killing of two Russian citizens, both of whom were journalists, and one an ethnic Ukrainian.  Savchenko was also found guilty of illegally crossing the border into the Russian Federation and of attempting to murder civilians.  She was sentenced to a fine and to 22 years imprisonment.  The verdict is already in force since Savchenko refused to appeal. 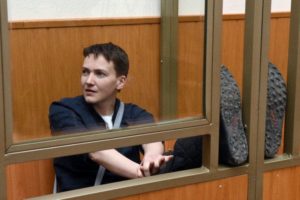 Nadiya Savchenko on trial in Russia in early 2016 (photo by Vasily Maximov, AFP)

At the insistence of the Ukrainian lobby in Canada, conservative MP James Bezan, along with other parliamentarians, has, in the Canadian Parliament, repeatedly pressured the Cabinet of Prime Minister Trudeau with the subject of Savchenko.  On April 19th, 2016, the MP for Etobicoke Center [Toronto], Borys Wrzesnewskyj, made yet another statement in Parliament in support of Savchenko.  In this regard, we would like to highlight the details of the so-called “Savchenko case”, which some parliamentarians call for the Canadian authorities to defend.

This conflict began in the spring of 2014 when the population of Eastern Ukraine refused to recognize the legitimacy of the new Kiev ultra-nationalist government.  The current Ukrainian government was brought to power through a coup and enforced its rule via violence and deception.  The new Ukrainian authorities immediately set the country on an anti-Russian path, sparking protests by the population of the Eastern region of Ukraine.  The Eastern population has, historically, always gravitated towards Russia.  They demanded negotiations or a referendum on determining the region’s autonomous status within a unitary Ukraine.  Citizens of the Eastern region of Ukraine wanted a guarantee of their cultural and linguistic rights and the right to vote on Ukraine’s foreign and economic policies.

Indeed, Ukraine being largely an artificial state consisting of several parts has always been divided along economic, political, and cultural-linguistic lines.  Its East and West regions have historically gravitated towards different poles of power – Europe and Russia, respectively.  To keep Ukraine united, it is necessary to transform its unitary government system into a federal state, as well as to give the Russian language a status equal to that of Ukrainian.  We see the success of such policy in Canada – a truly federal state which guarantees language rights to Francophone citizens.  The French, as we know from history, were the first European settlers of Canada in the 17th century.  They were later rounded up and deported from their lands by the British Crown as a result of the contemporary geopolitical situation.

In contrast, the Kiev government refused any civil rights to the residents of Eastern Ukraine, considering them to be sub-human. Calls for negotiations were ignored.  Regular forces and all-volunteer, punitive, paramilitary battalions of ultra-nationalists were immediately dispatched against the citizens of Donbass after they started a peaceful protest.

Donbass residents had no choice but to take up arms in defence of their land.  According to official figures, as a result of the conflict, a “hot phase” of which ended in February of 2015 with the signing of the Second Minsk agreement, more than 5,300 people had been killed and over a million became refugees.  Most of the refugees moved to Russia, the “aggressor” country according to the Ukrainian leadership.

Ukrainian forces have continually violated international humanitarian law by indiscriminate artillery attacks upon residential quarters and upon infrastructure indispensable to the survival of the civilian population.  In addition, munitions such as phosphorus and cluster bombs, which are prohibited by international treaty, are used by the Ukrainian military.

In spite of these realities, the international community has demonstrated and encouraged total disregard for international law.  The West applies pressure to the Russian government to fully implement the Minsk Agreements, even though Russia is not a party to the conflict.  If Russia were to become involved, evidence of cross-border Russian troops would have been submitted by the Ukrainian intelligence service with possible imagery from NATO’s orbital satellites.  In the absence of such material ‘evidence’, one can only commend Russia for the tremendous restraint exhibited in regards to the internal Ukrainian struggle.

From the beginning, a special role in the genocide of the Russian population of Donbass was assigned to the so-called “territorial defense battalions of Ukraine”.  This volunteer, military detachment of the Ministry of Defense previously served under the Interior Ministry.  Its numbers have grown to the size of regiments or brigades and is now involved in the so-called “anti-terrorist operation” (i.e. ATO) in eastern Ukraine.  These battalions, staffed with fanatical ultra-nationalists, are often comprised of villains and gangsters having extensive criminal records.  By some estimates, these undesirables comprise up to 30% of the total ATO fighters.  Equipped with weapons, they are fully willing to continue killing, raping and looting the local population of Donbass.

Nadezhda Savchenko had been a member of Ukraine’s Armed Forces since 2004 when she volunteered to participate in the armed conflict in Donbass.  She left her unit in the Western city of Brody, Lvov region, and volunteered for the 24th Separate Assault Battalion” Aydar” in Donbass.  According to the official version of the investigation, she was arrested on Russian territory after having crossed the border under the guise of a refugee.  According to the Ukrainian side, she was captured by armed residents of Lugansk region and then taken to Russian territory.  The investigation established the following: In June 2014, Savchenko was directing fire at a convoy of civilian refugees who were fleeing heavy fighting near Metallist, a village near the city of Lugansk, Lugansk being the capital of one of the two breakaway republics in eastern Ukraine.  Anton Voloshin and Igor Kornelyuk (the latter an ethnic Ukrainian) were Russian journalists of the All-Russia State Television and Radio Broadcasting Company (VGTRK).  They were reporting the Ukrainian artillery shelling of the refugee convoy.  That was the alleged reason being targeted by the Nadezhda Savchenko assisted, Ukrainian artillery.

On March 21st, 2016, the Donetsk City Court in southern Russia’s Rostov Region found Savchenko guilty under article 105 of the Criminal Code of the Russian Federation[1] of complicity in the murder of Russian journalists Igor Kornelyuk and Anton Voloshin in eastern Ukraine, and of illegal border crossing.  She was sentenced to 22 years in jail.  Savchenko was also accused by the militia of torturing captured POWs, including an Orthodox priest.  She wasn’t tried for those allegations because the victims were not Russian citizens.  However, in accordance with Paragraph 3, Article 12 of the Russian Criminal Code, foreign citizens who commit a crime outside Russia may be prosecuted within the Russian Federation if the offense was directed against a national of the Russian Federation.  Russia had a right to persecute Savchenko for her complicity in the murder of Russian citizens.

Mr. Dion’s March 8th statement was one of many manifestations of an ongoing Western campaign of pressuring Russia.  As a Canadian public organization, our concern must now be expressed that such statements from the Canadian Minister of Foreign Affairs show a lack of understanding of the difficult situation in Ukraine.  Canada risks becoming a nation with a reputation – a reputation of meddling and interfering in the internal affairs of sovereign nations, a nation which places the desires of special interests upon an honored pedestal more elevated even than that of justice. To what do we owe our new and tarnished reputation?  It is the Ukrainian lobby and certain parliamentarians who champion their cause.  In being so led astray and subverted by special interests, Canada has jeopardized its own democratic ideals of bilingualism and federalism – two esteemed principles upon which Canada was built.

Crime is deserving of punishment.  Punishment need not be harsh or excessive but it must be just and it must be administered.  Nadezhda Savchenko has earned a sentence and her reward must not be withheld.

Notes:
[1] “…. aiding in the murder of two and more persons in connection with execution of official activity, publicly dangerous method, on motives of political hatred committed by a group of persons”