Far-right party founder from Ukraine welcomed in the UK 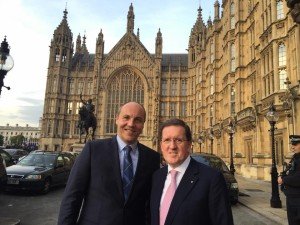 A leading British think-tank has defended its decision to invite a far-right Ukrainian party founder to speak at an event in London this week. Ukrainian politician Andriy Parubiy, who set up a political party that attracted neo-Nazi sympathisers, was set to attend a public briefing at the Royal United Services Institute (Rusi) this Friday. He was set to discuss Ukraine’s attempts to counter separatist and Russian attacks.

Mr Parubiy sparked controversy after he co-founded the far-right Socio-National Party of Ukraine in 1991, which was later renamed Svoboda. The party, which described itself as an “enemy of communism”, was modelled on Hitler’s fascist ideology and restricted membership to ethnic Ukrainians.

Mr Parubiy went onto head up the National Security and Defence Council. He is currently the First Deputy Speaker at the Ukrainian parliament. SEE ALSO

But a spokesman for Rusi, a leading defence and security research group, which did not reference Mr Parubiy’s ties to the far-right group in the event’s description, said: “The situation in Ukraine is a key concern for UK security, and Mr Parubiy has been an important participant in recent transitions there. Before arranging for Mr Parubiy to speak at the Institute, Rusi has considered both the speaker’s past and his current political activities and has decided that none fail the stringent qualifying tests applied by the Institute.

“The details posted in Rusi publicity about the speaker’s personal biography are not meant to be exhaustive, and are most certainly not meant to pass judgment on the speaker’s character and activities. Nor does an invitation to speak at the Institute entail an endorsement of the speaker as such, or of his political views. Rusi has received no representation from its members either objecting or endorsing the invitation to Mr Parubiy.”

He added: “Rusi is devoted to the promotion of an open, unhindered debate on all relevant international matters, as they affect the security and well-being of the United Kingdom and its allies. While the Institute will refuse a platform to people who openly advocate violence or any other actions which are deemed illegal under either domestic or international law, in the spirit of a free debate Rusi often hosts people and organisations whose views some may find objectionable.”

Mark Gardner, director of communications at the Community Security Trust, said: “Ukrainian nationalism is a complex matter, but you only have to see the Nazi type symbol of the Patriot Ukraine group to understand why many people will be deeply concerned about Rusi hosting this man.”

A Board of Deputies spokesman said: “Although Mr Parubiy will not be speaking on behalf of Svoboda, we do hope that those present will hold him to account for his past involvement in some of the ugliest fascist movements in the Ukraine.”

RUSI’s announcement of its meeting with Andriy Parubiy is here.

Andriy Parubiy reports on his Facebook page on October 20 about his first day in the UK. He met with Lord George Robertson, former Labour MP and former NATO general secretary. He also says he met with Shadow Leader (Labour Party) of the House of Commons Chris Bryant, with Labour MP Stephen Pound, and with SNP MP Stephen Gethins MP. Tory MP Daniel Kawczynski reports that he, also, met with Parubiy (https://twitter.com/KawczynskiMP/status/657155955323445248). Parubiy reports on Facebook that “all assured me of their support for continuing sanctions against Russia.”