That was some speech Immigration Minister Chris Alexander gave the Ukrainian Canadian Congress last week. (On YouTube, begins 9′ mark.] It combined a scathing attack on Vladimir Putin with a rousing call to arms. 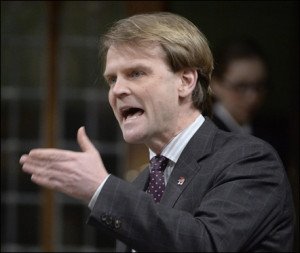 The minister’s barn-burner began with a quite reasonable proposition: that the West’s escalating confrontation with Russia is a threat more dangerous than terrorism, Syria or Islamic State. I agree. Russia is a major power, the largest country in the world, with a nuclear arsenal capable of human extinction. No other threat compares.

This fact reaffirmed, Mr. Alexander then drove his rhetoric right off a cliff. The “whole mad nightmare” of Vladimir Putin, who is “behaving like a terrorist,” will only end, he predicted, “when the whole world is standing against him, with every option on the table … (and) standing with Ukraine with military assistance.” His call for war was unambiguous: “Let’s join that fight.”

God help us. The minister evidently imagines that before Putin is done, the whole world will have to confront Russia with every option — including nuclear weapons. This makes no sense.

Turning to root causes, Mr. Alexander suggested that “maybe Ukraine’s in the plight that it’s in because of mistakes that the U.S. and others made jointly in Syria.” Which makes no sense either. Does the minister really think that a Western invasion of Syria would have changed the Kremlin’s mind about Ukraine? Does he really think the problem lies in the Middle East?

Mr. Alexander warned that “we are at the beginning of a long struggle” against Russians “who want to put Humpty Dumpty back together again.” In the meantime — in his view — there is no hope for world peace and security “without a full international effort to give Ukraine the tools it needs to drive Russian forces from its borders and secure (them) for good.”

No, Mr. Alexander: Outside of its own press releases, our government is not leading the world on the Ukraine issue.

But no, Russia is not trying to put the USSR back together again. And no, world peace and security would not be at all well served by major war with Russia on its border. Nor would Ukrainians — who would be, as they have been before, the first victims of any such conflict. Mr. Alexander is right: “The buck stops in Ukraine.”

Despite his alarming forecasts for Ukrainian and world security, the minister’s conclusion was upbeat. The “determination in the faces” of his audience gave him confidence, he said, that “the future of Ukraine is still bright, that our ties were never stronger … and (Canada’s) leadership in the world on this issue never more important.”

I understand the sentiment but, again … no. The truth is that the future of beleaguered Ukraine is not at all bright these days; it’s clearly fraught with risks of further political and economic turmoil, of more misery.

And no, Mr. Alexander: Outside of its own press releases, our government is not leading the world on this issue. Others — the ones who engage in diplomacy — are.

I think Mr. Alexander and his colleagues should take a lesson from Ronald Reagan. His ambassador to Moscow, Jack Matlock, spoke recently about Reagan’s approach to the Russians in the mid-1980s: “What Reagan understood was human relations. He understood that the other side is also made up of human beings, with their own policies, their own requirements. And number one, you’ve got to deal with them with respect. Reagan never denigrated Soviet leaders by name, whatever he thought of their system.”

Since nothing in Mr. Alexander’s speech has been retracted since he gave it, we must assume that he was speaking for the government. It troubles me greatly to think that these views represent the quality of public discourse and foreign policy analysis Canada is bringing to bear in a deadly serious global security crisis. It troubles me even more to think that Ukrainian Canadians might believe that such facile thought and reckless rhetoric will help the land of their ancestors.

Mr. Alexander claimed to speak “for those of us who have served in Russia.” He did not speak for me.

Christopher Westdal is a consultant, corporate director and occasional commentator on international affairs. A former Canadian diplomat, he was ambassador to Russia (2003-06), the UN in Geneva and the Conference on Disarmament (1999-2003), Ukraine (1996-98), South Africa (1991-93) and Bangladesh and Burma (1982-85). In Ottawa, he worked in Foreign Affairs, CIDA and the Privy Council Office. Mr Westdal lives in Chelsea, Quebec.

Explanatory note by New Cold War.org:
The story of Citizenship and Immigration Minister Chris Alexander’s pro-war speech against Russia on February 22 in Toronto and the minister’s association with the extreme right in Ukraine was first reported on New Cold War.org on March 13.

What is not reported in ipolitics or Postmedia re Alexander’s Feb. 22 speech is that he was speaking at a fundraising dinner in which the special guest was the extreme right politician and paramilitary leader of Ukraine, Andriy Parubiy. Parubiy was feted the next day in Ottawa, including with meetings with Minister of Foreign Affairs Rob Nicholson and MPs from at least the Conservative and Liberal parties.