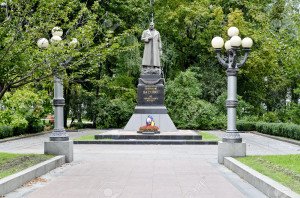 Monument to General Vatutin in Kiev

General Vatutin, born in 1901 [corrected], commanded Soviet troops in the liberation of Kiev from Nazi Germany occupiers in 1943. He died on April 15, 1944 when his entourage was ambushed by the Ukrainian Insurgent Army.

Ukrainian media has reported that the city government of Kiev proposes dismantling of the monument, located in Mariinsky Park near the Verkhovna Rada. But Kyiv city hall replied that the issue is not on its agenda at this time. When it is, said the city, a dismantling will go through a due process.

The rally was attended by the heads of veterans organizations. They spoke out against the dismantling of the monument, under which are buried the ashes of the legendary commander. They also called on the mayor of Kiev, Vitali Klitschko, to defend the monument.

Activists at the event unfurled a banner with the inscription “Vatutin died for our Ukraine. Hands off his holy grave.” Participants to the rally laid flowers to the monument and paid tribute to the memory of General in a moment of silence. 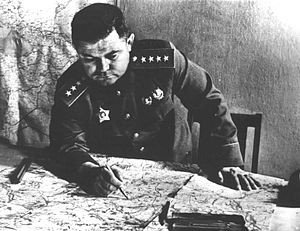 RIN News reported on March 16 that the 85 year old daughter of General Vatutin has asked for her father’s ashes to be moved to Russia and laid to rest at the military cemetery at Mytishchi, near Moscow. She believes that threats to his monument and grave are a disgrace. “Today, they say they are not going to dismantle the monument, but tomorrow they will come. My father died at the hands of Bandera. The current government idealizes that man.”

Elena Vatutin lives in Prague. She says she has sent a letter to Russian authorities with her request. “I need to think about the grandchildren and great-grandchildren of my father who will wish to visit his grave. In Ukraine today, a nightmarish situation is developing.” (Russian news report here.)