Analyst Dan Glazebrook criticizes those who ‘naively’ expected change in U.S.  foreign policy under Donald Trump. He welcomes a tough stand by Russia against U.S. sanctions.

RT:  What do you make of Russia’s response to the new U.S. bill? Did it surprise you in any way? 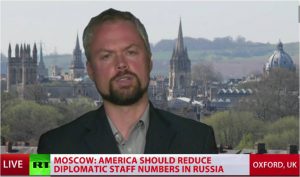 Political analyst Dan Glazebrook in the UK speaks to RT on July 28, 2017

Dan Glazebrook: No, it is a welcome development. I hope it marks the beginning of a concerted pushback against the increased U.S. aggression toward Russia and all of Russia’s allies that we’ve seen under the Trump administration.

Far from ushering in an era of U.S. isolationism or anti-U.S. militarism, as some of Trump’s more naïve supporters were hoping, the Trump administration has seen a ramped up aggression and hostility to every one of Russia’s allies. It’s seen the open targeting of pro-government forces in Syria – something which even Obama never stood for. It’s seen the tearing up of rapprochement with Iran and in paving the way for a more belligerent U.S. attitude toward Iran. It’s seen increased naval encirclement of China. And in each case, the Russian response has been minimal.

So I hope this marks an end to this – as the Russians themselves said in their statement – endless tolerance of U.S. hostility and aggression. I hope the vote in Congress last night [July 27] demonstrates once and for all that the Russians will get nothing from Trump other than increased isolation and encirclement themselves, especially if they do not massively increase that push back against U.S. aggression, which they have been, as they noticed hitherto, and have been inexplicably tolerant of. So I hope this marks a change in their approach.

Former Greek Ambassador Leonidas Chrysanthopoulos says the countermeasures announced today by Moscow should have been expected in Washington. “It is to the credit of Russia that they waited so long to take these measures. They gave an opportunity to the new administration to ameliorate the relations between Washington and Moscow,” he told RT.

“In spite of the fact that there was a good meeting between Trump and Vladimir Putin in Hamburg, we see that the administration and the Congress still insist on this hardline policy,” he said.

The diplomat called the Obama administration’s move in 2016 to expel Russian diplomats from two diplomatic compounds near New York City and in Maryland a violation of the law.

“It is totally illegal by international law – the confiscation of property that the Obama administration did in December because the property of the embassies also has diplomatic status and it’s covered by the Vienna Conventions on diplomatic relations,” he said.

“The measures Russia took today are according to diplomatic practice, and it is exactly a reply to the measures taken by the Obama administration.”

Thomas Fasbender of the Dialogue of Civilizations Research Institute (Berlin) agrees that Russia’s decision was expected, given that Moscow did not respond to the expelling of its diplomats at the end of 2016.

“So the question was rather… would Russia after yesterday’s decision by the U.S. revert to even economic measures that were widely discussed also in U.S. business circles in Moscow?

“There is fear that Russia might to some extent sanction the presence of U.S. companies, the activities of U.S. companies in Russia, who employ from my knowledge around 135,000 people there. [The fact that] this did not happen signals that from the Russian point of view reason prevails.

“But of course, the diplomatic measures are harsh,” he told RT.

Related analysis:
Time for Europe to stand up to U.S. hawks on Russia, commentary by Neil Clark, RT.com, July 28, 2017

Latest U.S. sanctions potentially throw a massive spanner in the works of the Nord Stream-2 gas pipeline between Germany and Russia

Introductory note by New Cold War.org:
Reporting by Western news agencies of the votes in the U.S. Congress (House of Representatives on July 25 and Senate on July 27) to increase sanctions against Russia (also against Iran and North Korea) are punctuated by the claim that sanctions run counter to a desire by Donald Trump for improved U.S.-Russia relations. See a July 28 interview by RT with analyst Dan Glazebrook in which he calls this claim “naïve”. In the hands of Western media, the claim is part of the madcap, ‘Russia truther’ drive that has seized the U.S. Democratic Party and its media echo chamber.

A corollary to the ‘Trump wants better relations with Russia’ interpretation is the claim that European Union governments are vigorously opposed to more sanctions against Russia (example here). No, the EU imperialist governments are opposed to further sanctions by the U.S. if those should infringe upon their sovereign right to lord over the world as they see fit. For example, the EU is concerned that U.S. prerogative might interfere with their sovereign decisions to purchase Russian oil and gas.