More on the Eurocoup and political deadlock in Portugal

The Portuguese election: quicksand in the center, an emboldened left and a desperate president

João Camargo is an activist in the precarious workers’ movement and in the social movement ‘Que se Lixe a troika. Queremos as nossas vidas!’ (‘To hell with the Troika, we want our lives!’). He is an elected municipal official in Amadora, a suburb of Lisbon.

The Portuguese center-right ultraliberal government, which went “far beyond the troika”, won a relative majority in the 4th of October general election. With 36.8% of the vote and 1.994 million votes, the previous governmental coalition (PSD and CDS) was the winner. In second place came the Socialist Party, with 32.4% and 1.746 million votes. The biggest surprise and strongest rise was the Left Bloc, which won 10.2% of the vote with 551,000 votes, followed by the Communist Party, with 8.3% and 446,000 votes. When compared to the previous 2011 election, the right-wing parties lost more than 700,000 votes, the Socialist Party (PS) had 160,000 more, the Left Bloc (BE) rose by 260,000 and the Communist Party (PCP) by 3,400 votes. 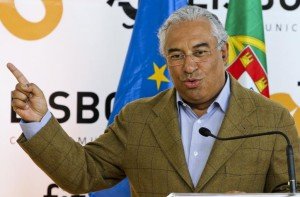 Antonio Costa, leader of the Socialist Party in Portugal

The PS, which has for the last 40 years been running the country with the Social-Democrats (PSD) and the conservatives (CDS), suffered a massive shock, although the polls in previous weeks clearly predicted this outcome. Not seen as an alternative to the right wing’s austerity, it had a disastrous campaign after its best-known leader, previous prime-minister José Sócrates, was arrested for corruption. It now faces its greatest dilemma: turning right and approving a right-wing government or turning left and opening a whole new scenario, never seen in Portuguese politics: a PS government supported in Parliament by left-wing parties, the BE and PCP which now count 18.5% of the vote, one million votes.

The President of the Republic, former prime-minister Cavaco Silva (1985-95), had previously stated, far exceeding his mandate, that he would not empower a relative majority and an unstable government. After a long career, once more he has lied. Two days after the election, after meeting with only his own party (PSD), Silva told the country he had asked Passos Coelho (former prime-minister and head of the winning coalition) to form a stable government in which there couldn’t be parties that didn’t assume “international and historical treaties and agreements”, as well as “the grand strategical options” adopted for the last 40 years: that is, NATO, European Union, the Euro, the EU’s Budgetary Treaty and the future TTIP. This option was clearly meant to exclude BE and PCP from any governmental solution. Nonetheless, it was to the left that António Costa, leader of PS, turned.

The PS-PCP meeting the day after the President of the Republic laid out his “rules” as to who could be in government came as a shock: the communists said that they would support a PS government and could even eventually be a part of that government. The communists felt the pressure of being overtaken, once again, by the Left Bloc and gave a historic sign of the political possibilities of participating in a broader coalition. During the campaign, in the debate with the PS leader, BE’s spokeswoman Catarina Martins laid down conditions for talks on a left agreement, telling the PS to retreat on three points of its program: no freezing of current pensions, no welfare reform with cuts on future pensions, and no flexibilization of labour laws. On her election evening speech, Martins was also clear: “The Left Bloc will do everything to prevent the right wing coalition forming a government. We now await the response of the other parties”. The PCP spoke afterwards and supported this idea. The final decision would be in the hands of the PS.

After receiving the support of PCP, the Socialists started talking about good chances of forming a left-wing government. This put the right-wing coalition and all pundits in a terrified frenzy. From calling it a coup to anti-democratic, everything has been said. Waving the banner of the red scare and of the Portuguese revolutionary period [(1974-75], news and opinion columns have shown how the simple prospect of a discontinuity to extreme austerity opens the gate of generalized hostility from the mainstream media. From the EU, through Wolfgang Schauble [German finance minister], came the cheer for the right-wing coalition’s meager victory as a sign of support of the Portuguese people for more austerity measures, [followed by] Durão Barroso’s claim that a government supported by far-left parties would face a major backlash from the markets.

After a frustrating meeting of the coalition (PSD-CDS) with the PS, Costa went to meet Catarina Martins in BE’s headquarters. The Left Bloc spokeswoman declared afterwards that “the Passos (PSD) and Portas (CDS) government was a thing of the past”. The fall in the stock markets, the day after, was presented as a consequence of this meeting and the declarations that followed it.

A second meeting of PS with the coalition turned out to be another frustrating assembly, putting an end to negotiations in the “central bloc”. PSD-CDS accepted 20 of the PS’s election program measures and PS had demanded at least another 20 (to which the right-wing said they were willing to negotiate everything). PS fully turned to a left-wing solution, although there is turmoil inside the PS’s ranks, with senior leaders both supporting and opposing a left-wing solution. António Costa has now promised to take the left-wing solution to a party referendum. The right-wing parties accepted they were losing ground and victimised themselves, relying heavily on a presidential veto.

The possibility of a Socialist Party government supported in Parliament by the Left Bloc and the Communist Party is now a credible one. The devil, of course, is in the details. It is clear that the PS will not assume any anti-capitalist stance, it will not accept defiance of the EU’s austerity regime and will have important difficulties in implementing some of the agreements it is making with BE and PCP. The left-wing parties are fighting to ensure a stop to austerity in the short term and some recovery in labour income — and stopping the “further than the troika” coalition from returning to power. They are also exploiting all the possibilities of forcing the PS to choose a path between PASOK and Labour [i.e. between collapsing through agreements with the Right or revitalizing itself with the kind of turn that Corbyn represents], pulling it to the left and exposing a lot of PS members and leaders as de facto right-wing representatives.

Two weeks after the election, the President of the Republic insisted on naming Passos Coelho as Prime Minister, against the majority of Parliament (PS+BE+PCP+Greens = 53% of Parliament). In his speech to the country on the 22nd of October, Coelho directly addressed PS MPs calling on their rebellion to vote against their own party and give their support to the right-wing government. Further, he again attacked the Left, emphasizing its inability to support a solution with “anti-European” parties, which is the current term used by the right to undermine any deal between the PS, the Left Bloc and the Communists. He finished with a very clear threat that he would not accept a majority government of the left.

Now, PS, BE and PCP (or any of the three) will have to present a no confidence vote, which will lead to a fall of government. The question is: in January, there will be presidential elections and this president cannot dissolve the parliament and call another election. Also, any incumbent president will not be able to dissolve parliament and call for another election in the first six months of his mandate. This means the current parliament will stay for at least nine months. If Cavaco Silva insists on the illegal action of not appointing a left government, the previous government will stay in power without any real power and without a budget, that is, without being able to implement any new measures.

On the day after Cavaco Silva appointed the Right to run the country, PS’s candidate for the second figure in the Republic, the President of the Assembly of the Republic, Ferro Rodrigues (one of the most leftist MPs of the socialists), was elected with 120 votes, uniting PS, BE, PCP and the Greens and defeating the right-wing candidate. It’s the first defeat for the right, and next week there will be the final test, the vote to bring down the right-wing government and put all responsibility on the President of the Republic for either naming a left-wing government or leaving the country in a nine month coma (that’s stability and responsibility for you, right?).

The contradictions in this whole process seem to be solidifying the PS’s turn to the left. The rebellion of its most right-wing leaders seems to be declining as a result of the reactionary actions of the President of the Republic. If the PS had chosen not to make a turn to the left (that is, not accepting a minimum program to halt austerity and restore some of what has been taken from the people in recent years) it ran the risk of being assimilated with the PSD. This apparent move to the left opens a whole new set of possibilities in Portugal as in other countries, with the Spanish and Irish elections just around the corner.

All signs from the Portuguese bourgeoisie were that there should have been a government of the PS and PSD. That possibility no longer exists. Now that the political center is shattered, the left needs to push and make sure that the centre is just quicksand from now on. The class struggle scenario in the Portuguese Parliament has unified all the reactionary voices. The desperate actions of the President of the Republic to safeguard the status quo of misery, austerity, precarity and the massive theft of wealth from the workers to capital show how much they were caught off guard by an emboldened left. The time will soon come to once again push all these contradictions back in the streets and destroy once and for all the “arc of power” and the end of history.