Two reports by Ivan Katchanovski, published on his Facebook page, Feb 9 and 10, 2016

‘The verdicts in the cases of protesters killed on Maidan Square Feb 20, 2014 will take years. Is that wise?’ 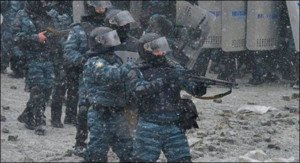 This is a rare Ukrainian publication which reports that a forensic ballistic expert examination of Berkut bullet samples did not match bullets extracted from the killed protesters, that no such expert examinations of firearms found in Kyiv last summer have been conducted to match them with the same extracted bullets, and that the Maidan massacre trial revealed new evidence of snipers in the Hotel Ukraina.

But a forensic expert report, which was presented during the trial and concluded that Kostenko was shot from the rear, is not mentioned in the article, even though his position seconds before and after his killing in a video presented during the trial and the direction of the entry and exit wound in this expert report point to a shot from the Maidan area, specifically Zhovtnevyi Palace or Ukrkoopspilka building. My paper presented to the American Political Science Association (APSA) [updated Sept 2015] presented evidence of snipers in both these buildings when they were in the Maidan-controlled area.

The article also reveals that the investigation determined that snipers, who were filmed shooting from a Svoboda deputy room in the Hotel Ukraina in the BBC and ICTV videos, did not break into this hotel room.

From a report on Hromadske Television, Feb 9, 2016

Another bombshell from the Maidan-massacre investigation. The Prosecutor General Office of Ukraine investigation of the Maidan Massacre concluded that about half of 157 wounded protesters were shot on February 20, 2014 from other sectors than the Berkut police sector. This implies the Maidan-controlled sectors.

The GPU prosecutor has specifically admitted that they investigated such shooters in the Hotel Ukraina. The GPU prosecutor has stated that they charged the Berkut special police company members with wounding 80 out of 157 protesters and simply omitted the wounding of 77 protesters from the prosecution charges against three Berkut officers and consequently from their trial. This was done because of conclusions of expert reports based on testimonies of the wounded protesters about their positions and directions of gunshots along with videos, photos, and forensic reports.

The GPU charged the same Berkut officers with killing of 48 out of 49 protesters in a terrorist act. The Maidan trial and my APSA paper showed that these charges were made even in spite of forensic ballistic and medical reports, videos, testimonies of the Maidan eyewitnesses, and bullet impact signs pointing to deadly gunshots from the Hotel Ukraina and other Maidan-controlled locations. My paper focused on the analysis of the killings of the Maidan protesters, but it also presented various evidence, including videos and testimonies of many wounded protesters, that they were shot from this hotel and other Maidan-controlled locations.

The GPU has also revealed for the first time that the investigation has only several bullets from the 157 wounded protesters. This means that one of the key types of evidence in criminal investigations is, with some exceptions, omitted from the investigation.

The GPU has also stated that only one third of about 100 bullets which were extracted from the killed and wounded protesters and from trees, walls, and soil on the massacre site has been subjected to forensic ballistic examinations. The GPU admission about the large number of protesters wounded from the Maidan-controlled locations and the omission of most bullets from the investigation and forensic ballistic examination provide another indication that the protesters were massacred in a false flag operation and that the official investigation is falsified for this reason.