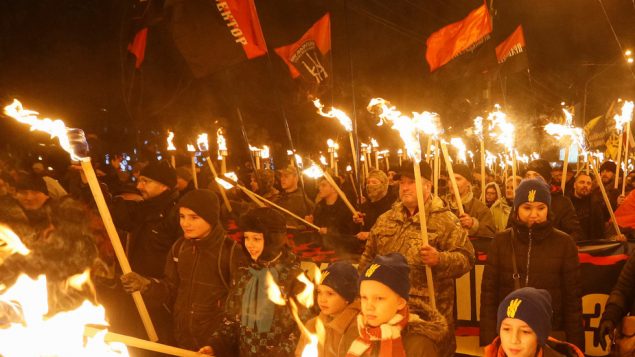 A couple of weeks ago we published, Notes on Anti-Semitism in Ukraine: is a president of Jewish origin able to reverse the pro-fascist trend? an article by our regular contributor Dmitry Kovalevich. The erection of a monument to Roman Shukhevych, a Nazi collaborator accused of mass murder of Poles and Jews, in the Western Ukrainian city of Ivano-Frankovsk, clearly shows the level of anti-Semitism to which the country is currently subjected, despite it having elected Volodymyr Zelensky as president, who is himself of Jewish origin.

A monument to Roman Shukhevych, a Nazi collaborator accused of mass murder of Poles and Jews, has been erected in the Western Ukrainian city of Ivano-Frankovsk.

Roman Shukhevych needs no introduction in Ivano-Frankovsk,” the city’s mayor said, according to local media. “All the more strange that we didn’t have a proper monument to him until now.”

New monument to Nazi collaborator and war criminal Roman Shukhevych unveiled in Ivano-Frankivsk. Officer of Nachtigal batallion and 201st Shutzmanshaft batallion, he participated in Holocaust. As commander of UPA he is responsible for mass killings of 100 thousand Poles. pic.twitter.com/7WlMd4saOo

Shukhevych was one of the leaders of the Organization of Ukrainian Nationalists (OUN), an extremist ‘revolutionary’ organization that employed terrorism to advance its ideology (which included totalitarianism and anti-Semitism). During World War II, he became a commander in the Nachtigall Battalion and later in the 201st Schutzmannschaft Battalion – Nazi military formations made up of Ukrainians including OUN militants.

The OUN is infamous for perpetrating the 1943 massacres of an estimated 100,000 Poles in Volhynia and Eastern Galicia areas, situated along the current borders between Poland and Ukraine. The Nachtigall Battalion is also accused of taking part in 1941 pogroms in Lvov, where over 6,000 Jews were killed, though its participation was not conclusively proved by international tribunals.

In modern-day Ukraine, however, Shukhevych is one of the Nazi collaborators (along with the notorious Stepan Bandera) celebrated as “fighters for the independence of Ukraine in the 20th century” against the communist Soviet rule of 1917-1991. Both Shukhevych and Bandera were briefly awarded the highest state award – the Hero of Ukraine – in 2007 and 2010 respectively, but both were later annulled.