By Greg Butterfield, published on Red Star Over Donbass, Aug. 7, 2015

On July 31, armed police and private security guards carrying semiautomatic weapons attacked Liberty Township, a tent city set up by dozens of protesters in Chișinău, Moldova, outside the home of wealthy oligarch and political kingmaker Vladimir Plahotniuc. The private security forces were especially brutal, and many people were injured. Several activists were arrested.

Protest organizers have called for the resignation of Interior Minister Oleg Balan, who praised the police action, and for revoking the licenses of private security firms Argus S and GSS. (Grenada.md, Aug. 4)

The tent city, which included whole families, had been set up July 24 to protest steep price hikes for electricity and natural gas — austerity measures backed by Plahotniuc and the ruling “Alliance for European Integration.” Protests also spread to other towns and villages in the former Soviet republic of 3.5 million people, sandwiched between Ukraine and Romania.

Moldova’s currency has sharply depreciated in recent years, causing hardship for poor and working people, as pro-Western politicians cut off trade with Russia. While most Moldovan oligarchs have their money invested outside the country, agricultural and manufacturing workers dependent on the Russian market were hit especially hard.

As in neighboring Ukraine, Chisinau’s right-wing government seeks to sell off the country’s resources and impoverish workers and farmers in a bid to join the European Union and the U.S.-led NATO military alliance. Moldovan authorities have also shown a growing willingness to repress any signs of dissent.

During 2014’s parliamentary election campaign, and faced with the possibility of a left-wing, anti-EU majority, the governing right-wing alliance and oligarch-dominated media took a page from their Kiev allies’ playbook, labelling any and all opposition as “Russian agents.”

Two young, anti-fascist leaders, Pavel Grygorchuk and Mikhail Amberg, were arrested in November and held as political prisoners, first in jail and then under house arrest, for six months. Grygorchuk is editor of the communist website Grenada.md, and both activists are leaders of the Red Bloc Party, founded in May.

The witch-hunt continues today. Vlad Filat, chair of the Liberal Democratic Party, part of the government coalition, took to the airwaves to condemn the rate-hike protesters as “destabilizing the situation in the country.”

“Early elections – this is the clear goal of the protests. They want to stop our European path,” Filat charged. (Publika.md, Aug. 3)

During the week-long Liberty Township encampment, police and Plahotniuc’s security goons withdrew at night to allow far-right gangs and plainclothes agents to make violent raids against the tent city and visiting journalists. But the protesters held firm.

After a local appeals court ruled July 31 in favor of Plahotniuc’s demand to dismantle the tent city, cops and security guards moved in immediately, violating the rights of protesters who had planned to appeal the case to the country’s Supreme Court.

When activists attempted to regroup outside Plahotniuc’s mansion on August 1, they were met by a violent right-wing mob, which organizers say included private security forces out of uniform. Such tactics echo the rise of fascist groups in Ukraine. (Omega Media Group, Aug. 1)

Daily protests are being held outside the ANRE headquarters in Chisinau, where six hundred petitions against the utility rate hikes were gathered in a single day. Among the popular slogans are, “Down with the thieves in Parliament” and “Jail Plahotniuc!” (Omega Media Group, July 27) 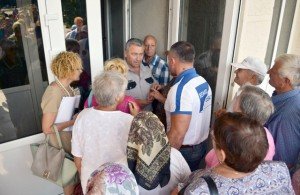 The protests have spread across the country. In Soroca July 28, dozens of pensioners marched against the tariff increase and into the office of the mayor, a member of the ruling Liberal Democrats, who had to say he agreed with them. The next day, in the southern village of Cioburciu, protesters blocked the national highway. Many drivers expressed solidarity.

“We believe the tariff increase is unreasonable,” one protester told Omega. “We have nothing more to pay for gas and electricity. We also want to live like human beings.”

Protests have continued since the repression in Chisinau. On August 1, the Union of Veterans and Council of Elders held a protest meeting in the city of Chadyr-Lunga and called for a mass action on August 8. Hundreds turned out in Vulcanesti on August 3. (Grenada.md, Aug. 4)

In response to the growing protest movement, the government was forced to take a step back on August 5, when a meeting of the Supreme Security Council decided to make “categorical recommendations” for revision of the tariff on natural gas, Grenada reports.

Activist Pavel Grygorchuk cautioned that this was meant to sooth public discontent while the regime prepares repression against protest leaders. “We need to understand that if it were not for the protests, then the authorities would not be talking about a revision to the gas tariffs. It means we need to continue to protest and make them still bigger,” he wrote on his Facebook page August 7.

“We are not going to stop,” Red Bloc leader Grigory Petrenko said at a news conference. “Our protests will continue. We will spend time working with initiative groups that have begun protests around the country against the tariff increase. We will gather all the forces into a single fist for nationwide protests in Chisinau in the near future.” (Grenada.md, Aug. 3)

Greg Butterfield publishes the blog Red Star Over Donbass. He also writes for the weekly newspaper Worker World published in the U.S.

Statement of the Central Committee of the Transnistrian Communist Party (PKP), August 6, 2015

The policy of the authorities of the Republic of Moldova continues to amaze with its inconsistency.

Just a few days after the formation of the new Parliamentary coalition with the hackneyed, but nevertheless pretentious name “Alliance for European Integration,” the repressive state machine of the RM showed the price of its declared “European values.”

On July 31, police armed with guns and “enhanced” by the soldiers of private security companies, destroyed the “Liberty Township” tent city in the center of Chișinău, where a group of civic activists protested against the steep rise in price of public utilities tariffs in the country. The harsh attack was greatly revealing — using brute physical force towards peaceful protesters.

Adding another dimension of ambiguity to this situation, on the day of the dispersal of “Liberty Township,” the Prime Minister of Moldova, speaking on television, actually recognized the fair demands of the protesters, pointing to the groundlessness of the increase in gas tariffs.

Thus, the actions of the police and mercenaries of the oligarchs can be regarded only as an attempt by the authorities to intimidate dissatisfied people. The next attempt by peaceful activists to draw the attention of the anti-people government to Moldovan society’s problems could end up, presumably, with protesters “who burned themselves,” as has happened in “pro-European” Ukraine. [Translator’s note: This refers to the May 2, 2014, massacre of anti-fascist protesters by neo-Nazis at the Odessa House of Trade Unions. Kiev authorities subsequently claimed the victims were responsible.]

Noteworthy by their conspicuous silence are the principal “beacons of democracy” — the ambassadors of the United States and the EU Member States, as well as representatives of numerous European institutions in Moldova. What happened in the center of Chi?inau was a gross violation of fundamental freedoms of individuals and citizens, which they all chose to overlook, revealing at the same time one of the principle features of the modern colonial system, where the infamous “human rights” promoted by America and Europe do not mean the same thing in, for example, Moldova or Ukraine.

All of this once again convinces Transnistrian society of the correctness of the choice made 25 years ago to build their own state. As in 1990, Transnistrians have no confidence in the “pro-European” politicians from Chișinău, whose level of hypocrisy is even greater than their Western masters.

The Transnistrian Communist Party expresses its abhorrence of the treacherous dispersal of peaceful protests and harassment of opposition activists in Moldova. We demand an end to the “witch-hunt” that has flared up with renewed vigor! We call on the authorities in Chișinău to abandon the policy of double standards, at least in relation to their professed “European values”!

Translator’s note: Transnistria is an independent republic that broke away from Moldova following the collapse of the Soviet Union. It maintains many of the traditions of Soviet times, including the hammer and sickle flag. The right-wing junta in Ukraine, backed by Washington, has threatened military action against Russian peacekeepers there, and has been building up forces in neighboring Odessa.