Mob in Ukraine drives dozens of Roma from their homes 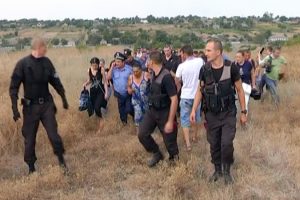 MOSCOW — Several dozen people in a Roma community in southern Ukraine were forced to flee their homes after a mob tore through their neighborhood over the weekend, breaking windows, tearing down fences and even setting a house on fire while the heavily outnumbered police stood by and watched.

The violence in the small town, Loshchynivka, was touched off after a local man was arrested on Saturday in connection with the rape and killing of a 9-year-old girl. A Ukrainian rights organization, the Kharkiv Human Rights Protection Group, noted that the man was not Roma.

But residents said tensions between non-Roma and Roma, already high, boiled over after the girl’s body was found. One villager, Oksana Glinko, told the local news media that people in Loshchynivka were “living in constant fear” of the Roma.

After the girl’s death, hundreds of residents demanded that the Roma be expelled, and on Sunday they gained the backing of the district council. Even Mikheil Saakashvili, the governor of the region of Odessa, which includes Loshchynivka, and a former president of Georgia, offered tacit support in a video message posted on Facebook, denouncing the village’s “antisocial elements.”

The Roma apparently left voluntarily, and by Sunday night about 40 of the 50 Roma in the town had left in a rush, leaving many essentials behind. Any who returned to collect their belongings were met with threats of lynching, the local news media reported.

With the authorities under pressure to prosecute the accused, a local police leader, Vadym Mohyla, said it was unfortunately “impossible to immediately punish the guilty”. 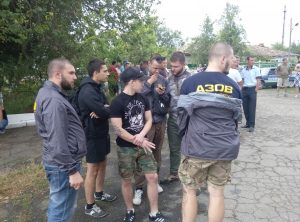 Western media is opting not to report that members of the notorious ‘Azov’ extremist paramilitaries are intervening in the village of Loshchynivka, Ukraine to inflame tensions and hatred against the Roma residents of the village. Azov press’ internet outlet proudly reports their intervention, with photos, here.

Scores of Roma have fled from a southern Ukrainian village after residents torched one Romany home and demanded authorities evict all Romany families from the area following the killing of a nine-year-old girl. 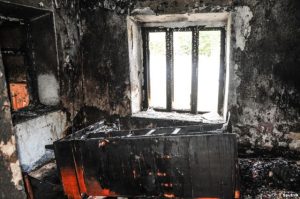 One of the homes of Roma residents in village of Loshchynivka, Ukraine that was torched by a mob on Aug 28, 2016 (Sputnik)

Amid soaring tensions, residents and local officials said they would provide a “safe corridor” on August 29 for Romany families to leave the village of Loshchynivka, near Odesa. However, the eviction operation was called off after some 40 of the village’s total population of 50 Roma left on their own overnight, carrying only essential items and leaving most of their belongings behind.

The expulsion threat came after scores of villagers attacked Roma homes following the killing and suspected rape of the girl, who was not from the Romany community. Only two Romany families remained in the village on August 29 — one of them the family of the suspected attacker, a 21-year-old Romany man who has not been publicly identified and who denies any guilt. 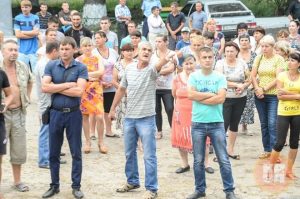 Mob in Loshchynivka, Ukraine confronts Roma residents in their village

The outbreak of communal violence underscores the tense conditions under which many Roma in Ukraine continue to live at the margins of Ukrainian society. In Loshchynivka, as in many other places in Ukraine where Roma are present, the Roma live in rented and often dilapidated buildings on the outskirts of town and are largely mistrusted and feared by members of other ethnic groups.

Tensions exploded in Loshchynivka after the girl’s body was found in an empty and ruined building on August 27. The Odesa Regional Police Department said that she had stab wounds in the chest, that she probably died of injuries to her heart and lungs, and that there were signs of rape.

According to police, on August 28 an angry mob of residents surrounded the six homes inhabited by the village’s Romany minority, kicking down fences and shouting for all Roma to leave the village immediately. One house was set on fire.

Several hundred village residents also held a rally to demand authorities force the Roma out if they were unwilling to leave. The local district council subsequently held an emergency meeting and voted to support the residents’ demand.

Yuriy Shishmash, the deputy of Izmayil district council, said on August 28 that the Roma would “get safe passage out of town” early the next morning so that they could “remove themselves and their belongings.” He also said, “We ask everyone to refrain from any kind of actions against them.”

The head of the district council, Valentina Stoykova, told reporters on August 28 that the Roma had agreed to be evacuated because they “understand they cannot live here.”

As police were dispatched from Odesa to maintain order in Loshchynivka, Odesa Governor Mikheil Saakashvili said in a video message on Facebook that he shared the outrage of “all residents” of the village.

Without making any reference to Roma, he said that “antisocial elements” were involved in “massive drug dealing” in Loshchinovka and that “the killer” had been detained and would be punished.

With just two Romany families remaining on August 29, police announced the “evacuation” operation had been canceled. The Roma reportedly relocated to the nearby town of Izmayil.

Human rights group in Ukraine called the events in Loshchynivka an example of mob justice. “You cannot project your hatred related to actions of an individual whom you consider a criminal against everyone else. There is no such thing as collective responsibility,” Yevhen Zakharov of the Ukrainian Helsinki Human Rights Union told RFE/RL on August 28. “Generally speaking, a decision to evict an entire community is illegal.”

In Ukraine’s last census, in 2001, some 47,000 citizens identified themselves as Roma. However, unofficial estimates are much higher, with the European Roma Rights Centre (ERRC) putting the number of Roma in Ukraine at 120,000 to 400,000.

The Budapest-based ERRC says that many Roma in Ukraine do not have basic identity documents and that they face discrimination in housing and access to education and employment.

Related news:
Anti-Gypsyism in France: the shame of the Republic, by Bernard Rorke, published on European Roma Rights Blog, Sept 2, 2016