How we were misled about Syria: Channel 4 News

Difficulties faced news organisations attempting to cover events in the war in Syria, particularly in the eastern part of Aleppo when under siege. Western journalists had stopped even trying to enter that area for fear of being kidnapped, or worse, at the hands of one or other of the armed factions holding the area. International relief agencies and NGO’s were not to be found on the ground either, for the same reasons.

This is one of the two main problems for media coverage of Syria that Eva Bartlett highlighted at a UN press conference in November 2016 when talking about her first hand experience of conditions in Aleppo [full version is here; short version featuring the claims discussed is here]. Asked by a journalist from a mainstream publication why she seemed to be challenging “all these absolutely documentable facts that we’ve seen from the ground”, she pointed out that he was referring to a hearsay narrative, not facts, because “sources on the ground? You don’t have them.” 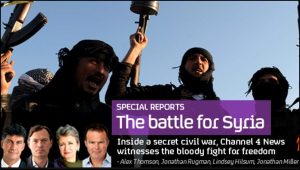 Channel 4 News editor Ben de Pear had earlier in 2016 grappled with this problem, of “safe access denied to objective independent journalists from outside” and had devised a strategy for circumventing it. He commissioned coverage from a Syrian woman called Wa’ad Alkateab who could move safely in the opposition-held area. She went on to make a series of films – Inside Aleppo – that, thanks to the prominence Channel 4 gave them, became influential in forming public opinion about the circumstances in Aleppo.

This neat side-stepping of the first problem, however, put Channel 4’s coverage at risk of succumbing to the second problem highlighted by Eva Bartlett: any testimony coming out of opposition-held areas has to be considered compromised. For we have to assume that whatever is reported from the opposition-held area is only what those with the guns will permit. So the presumption must be that information coming out is unlikely to be the whole truth and may contain untruths…

Read the full article at the original weblink above. Tim Hayward is Professor of Environmental Political Theory at Edinburgh University and  founding director of the Just World Institute.

Previous articles in this series by Professor Tim Hayward: