By Russkiy Malchik, translated from the Russian original by J. Hawk and published on Fort Russ website, Feb. 12, 2015 (including J. Hawk’s comment further below)

Information is still scarce. We have seen the main principles which were clear. But it’s obvious that they spent 16 hours discussing not the basic principles but the details. It is the details that are the core of the peace plan. 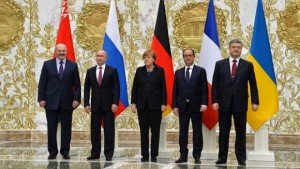 Official photo of ceasefire talks in Minsk, Belarus on Feb 11, 2015

Unfortunately neither Poroshenko nor other leaders signed the joint declaration, and the “Collection of Measures” were signed only by the members of the contact group, namely LPR/DPR, Kuchma in Kiev’s name, OSCE, and Zurabov. That list likewise contains 13 points with fairly general formulations, which will require further clarification. But there are also specifics that have been published and by which we can assess how the negotiations went and what kind of compromise was reached.

The first has to do with the withdrawal of heavy weapons under OSCE control. The conditions are rather odd: it specifies a distance of 50km (for cannon) or 140km (for rocket artillery), from the actual line of the front as of midnight, February 15, and for the militia from the September 19 line [the line of demarcation from Minsk-1].

This means that both sides should leave their positions, creating a huge belt (100-300km) without weapons, de facto up to the borders of the Donetsk and Lugansk regions. Which leads to the following question: who will control it? This is the key question. So far there are no clear answers. But considering that the issue of peacekeepers was frequently brought up, this is who they have in mind. It is not for nothing that the Donbass representatives said that they will accept only Russian and Belarusian peacekeepers. Kiev, on the other hand, does not want peacekeepers, but if it does agree it will want NATO troops. So there is a big question mark here.

The second interesting provision is this. In the paragraph 11 which concerns Ukraine’s constitutional reform, which is to be implemented by the end of 2015, there is a provision which includes the main provisions of the law on the “Special Status of Lugansk and Donetsk Region”, which read as follows:

–Immunity from punishment, prosecution, or discrimination for individuals which participated in the events that took place in various parts of the Donetsk and Lugansk regions (this amounts to legalizing all combatants).
–The right to language self-determination.
–The participation of local self-government in the nominating process for the office of prosecutor general and the courts in the regions (LPR and DPR de-facto control over the legal and law enforcement systems).
–The central government shall enter into agreements with the local self-government concerning economic, social, and cultural development of the regions (Kiev will enter into agreements with Donetsk and Lugansk concerning all crucial aspects of the joint economy).
–The government supports the socio-economic development of the separate regions (Kiev will partially finance the reconstruction of Lugansk and Donetsk, and guarantees the fulfillment of social obligations).
–The central government shall facilitate cross-border cooperation between the several districts of the Donetsk and Lugansk regions with regions of the Russian Federation (Kiev will not oppose the cooperation between Lugansk, Donetsk, and Russia).
–The establishment of people’s militia in accordance with local government decisions in order to maintain public order in the several regions (the militia becomes a law enforcement organization, all power institutions remain under the control of the current leadership).
–The authority of the local authorities and officials from special elections that were designated by the Verkhovna Rada in accordance with this law, cannot be invalidated before their terms run out (this guarantees the rights of the current DPR and LPR government until they are re-elected as part of the process of forming local self-government through new elections).

As a result, Donbass receives widespread autonomy within the framework of nominally unitary Ukraine. This is the compromise which satisfied Putin after the 16-hour Minsk marathon. Moreover, France and Germany guarantee the re-establishment of the Donbass banking system, and will reach an agreement with Russia concerning the rules concerning the free trade zone between EU, Russia, and Ukraine, while taking into consideration the special status of Donbass.

The third detail pertains to border control. Here the language is extremely clear. The border between Ukraine and Russia will be re-established only after Ukraine carries out constitutional reforms, which implies autonomy (self-government, people’s militia, cross-border cooperation with Russia). In other words, once Kiev gives Donbass control over its own territory, then the border shall be re-established…but will remain under militia control.

To sum up this quick analysis based on still-incomplete information one can say the following: in purely diplomatic sense, Russia scored a success, forcing Kiev and the West to accept a painful and temporary, but real compromise. It is based on freezing the military conflict and the autonomy of the Donbass while nominally preserving Ukraine’s borders. In practice we are talking about reformatting Ukraine from a unitary into a federal state, regardless of Poroshenko’s denials. If the Galicia banderites realize this, they’ll start screaming about “Poroshenko’s treason.”

Of course, the implementation of the agreement is another question. The fact that neither Poroshenko nor European leaders signed it does not make it easier. On the other hand, Hollande’s and Merkel’s wishes are more than real, so it will fall to them to compel Kiev to implement the “Collection of Measures.” The only other option is a complete defeat for Ukrainian forces. To which Putin merrily alluded when he mentioned Debaltsevo—either you come out with your hands up, or you’ll continue to get killed.

The Minsk peace plan from February 12 does not solve the problem (and it could not solve it), but creates the possibility to delay the war until the end of 2015. With one condition: that Kiev and Washington accept the federalization of Ukraine. If not, the war will come to Kiev.

J.Hawk’s comment:
The biggest factor here is whether the Ukrainian military is up to the task of continuing the fighting. If it is, if Poroshenko believes its forces have been sufficiently restored, the fighting will resume. However, the Ukrainian military took a heavy beating in the last months’ fighting and it will find it difficult to replace the lost equipment. Mobilization is unpopular, and there is little chance that NATO will rearm Ukraine. Last but not least, there is also the IMF and its stringent conditions on government spending that come as part of its bailout packages. Yaresko had already announced that Ukraine’s budget will have to undergo significant changes in order to accommodate the IMF. It’s difficult to see what else in that budget could be cut aside from the defense spending. Hollande and Merkel are not stupid, they’ve seen enough of Poroshenko to know what he is capable of, so therefore they will most likely act through the IMF to reduce Ukraine’s ability to wage war.

So overall this is a better agreement than Minsk-1, though not as good one as might have been reached should the Ukrainian military first suffered a catastrophic defeat. The fact that Novorossia will continue to enjoy unimpeded contact with the Russian Federation is also a major plus–Minsk-1 agreement called for the border control to be returned to Ukraine.

But in the meantime, Novorossia continues to exist and to enjoy a high degree of autonomy, though it is not likely that its authority will spread all the way to the borders of the Lugansk and Donetsk regions, even though Minsk-2 does not appear to contain any language concerning demarcation lines.

The above, of course, assumes that there will be a ceasefire at midnight of February 15, and there might not be one. Minsk-2 says nothing about Debaltsevo, which means the Ukrainian side will continue its attempts to break into or out of the encirclement. If the ceasefire goes into effect as of the 15th with the Ukrainian forces still trapped in Debaltsevo, they will have no choice but to surrender their weapons and depart. Poroshenko cannot allow that to happen, so the fighting could well continue. One can always perpetrate a “false flag” attack or two as an excuse for breaking the ceasefire…