As an  infantry attack against Debaltseve and daily shells on residential areas take place, Ukrainian politicians dream of Blitzkrieg and assassinations. 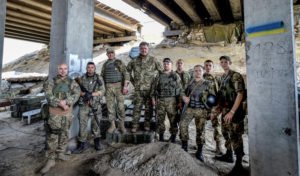 The Ukrainian army began the biggest attacks in months on the ‘People’s Republic of Donetsk’ in Donbass region in eastern Ukraine on June 29. As media in the internationally unrecognized republic reported, citing military spokespeople, soldiers of the 54th motorized rifle brigade of the Ukrainian Army penetrated for several kilometers in the direction of the transportation hub of the city of Debaltseve.[1]

Kyiv’s troops temporarily occupied the locality of Logvinovo and nearby hilltops before coming under attack and withdrawing to their initial positions.

What caused the retreat is not entirely clear. While the media of the People’s Republics reported that units of the people’s militia had repulsed the attack after initial confusion, with Ukraine losing three of four armored personnel carriers used in the attack, it later said that the Russian representative in the OSCE ceasefire monitoring group convinced his Ukrainian counterparts to order the withdrawal. It would seem, remarkably, that this had the tacit approval of the Western representatives in this group.

The patriotic Ukrainian media is silent about this whole story. But this doesn’t mean that the clash did not take place. Official Ukrainian agencies do not report failed operations. Even their own losses are barely reported. In contrast, the Ukrainian extremist “volunteers” publicize their exploits, in their effort to promote distrust in the leadership in Kyiv. For example, the ‘Right Sector’ reported on June 29 the death of a militant in its ranks, the renowned opera singer Vasyl Slipak. He performed as a baritone from 1997 to 2013 at the Paris Opera and recently volunteered to fight with the Right Sector. He was killed by a sniper along the front line of the conflict in Donetsk.[2]

The report that the Ukrainian withdrawal took place after an intervention by the Russian representative in the OSCE monitoring group suggests that the original attack was a local initiative defying army discipline. But that seems implausible in the light of recent statements by President Petro Poroshenko. In recent day, Poroshenko has spoken during in frontline visits to newly established units of the National Guard saying he wants them to gain “combat experience”. Also, the daily artillery terror against residential area of Donbass harkens back to Poroshenko’s speech in November 2014 that “Our children will go to schools and kindergartens, while theirs will hole up in basements [bomb shelters]… This is exactly how we will win this war!”[3]

Ukrainian media later declared that Poroshenko was quoted “out of context”, but the president never denied making the statement.

Officials of the Kyiv administration are currently indulging in violent fantasies. Pavlo Zhebrivski, governor of that part of Donetsk region still under Kyiv control, said recently that the Ukrainian army is in a position to conquer Donbass [Donetsk and Lugansk regions] in a matter of weeks.

On the other hand, this could take years. Because Ukraine has a problem: its military supply. Ukraine has largely used up the ammunition inherited from the Soviet Union era. The head of the National Security and Defense Council, Olexander Turchinov, recently acknowledged that the industry of Ukraine is unable to replenish its arms supplies. All the more urgent, then, is the request of the Kyiv representative for arms shipments from the West.

That is one side of the arms supply problem. The other side is consideration of how to conserve ammunition. Vasyl Hrytsak, chief of the SBU (the national security service), has threatened the leaders of the people’s republics with assassinations that would look like “accidents”. A first attempt some days ago failed. On June 24, Ukrainian forces shelled a hospital in Donetsk at the very moment when the renowned military commander ‘Motorola’ [Arseny Pavlov] was there for treatment. The assassination attempt failed, causing only physical damage.

Notes by translator:
[1] The city of Debaltseve was the scene of bitter fighting in January-February 2015 after Ukrainian forces became surrounded and trapped. Rather than accept an offer that the trapped soldiers could withdraw provided they leave their weapons behind, the Ukrainian military command ordered them to fight their way out. The Ukrainian forces suffered heavy casualties. Some reports say hundreds died, others say thousands died. The military debacle at Debaltseve led to ceasefire talks at Minsk, Belarus. The ‘Minsk-2’ ceasefire accord was signed on February 12.

[2] A homage to Vasyl Slipak is on the extremist website Euromaidan Press. [3] Video of Poroshenko speech here.

Related readings:
*  The story of the recent Ukrainian military probe at Debaltseve is described by Donetsk International New Agency in a July 1 report, here.