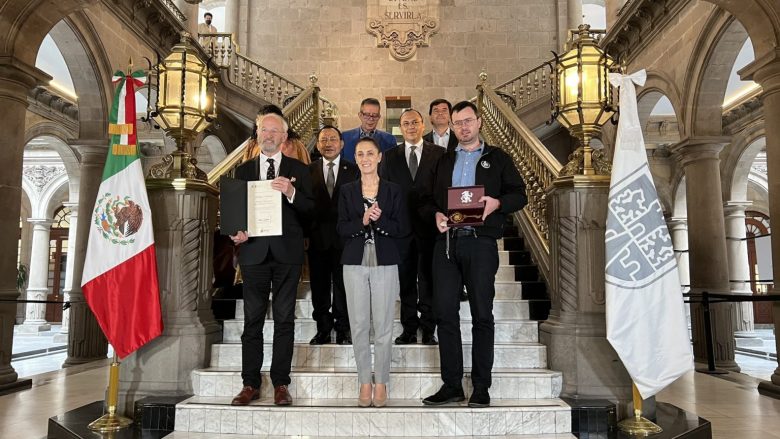 Julian Assange’s father John Shipton and his brother Gabriel Shipton accepted the key on his behalf and thanked the people and government of Mexico for standing in solidarity.
________________________

Julian Assange, Australian journalist and WikiLeaks’ founder, was declared a ‘Distinguished Guest” of Mexico City by the head of government of Mexico City, Claudia Sheinbaum on on Wednesday, September 14. Sheinbaum made the public declaration and handed him over the keys to the city through his father John Shipton and brother Gabriel Shipton. The keys to the city are an honorary recognition granted by the capital administration and are given to important personalities. The act was intended to extend the country’s solidarity to Assange, who is currently fighting extradition to the United States on espionage charges.

During the ceremony, which was held in the Council Chamber of the Old City Hall, Sheinbaum said that “it is an honor to hand over the keys to the city to Assange. It is a symbolic act of what Mexico City represents: freedom of expression.” She stressed that the capital has long been a refuge city that offers hospitality to those who fight for truth and freedom of expression.

“Mexico City has always been a refuge city, a hospitable city…It is a progressive city, which has always defended great freedoms and independence. For us it is what Julian Assange represents, he represents the truth, he represents freedom of expression, and never anywhere in the world should it be persecuted. For this reason, because we endorse Independence today in this national month and because we always endorse freedom of expression, Julian Assange, you are welcome to this city,” said Sheinbaum.

For his part, Jesús Ramírez Cuevas, General Coordinator of Social Communication and Spokesman for the Government of the Republic, said that Julian Assange could be considered a “21st century liberator,” and added that “that is why, the Mexican government has made, through President Andrés Manuel López Obrador (AMLO), a request to the United States government that Julian Assange be granted political asylum and refuge in our country.”

Ramírez Cuevas said that “metaphorically Julian Assange is like David against Goliath, a small group facing a great power, but at the same time representing the desires, struggles and freedoms of all humanity” He added that “the struggle that Julian Assange represents is a struggle for freedom because today we fight it daily in defense of our right to information, not only against false news and information manipulation, but against the algorithms and the technological ways in which messages are hidden and public opinion is manipulated.”

John Shipton thanked the people and government of Mexico for the protection that has been granted to them, as well as the warmth shown towards them since their arrival in the country.

Mexico City governor @Claudiashein just gave the keys to the city to Julian Assange. John and I accepted on Julians behalf. The last week in Mexico has been filled with love for Julian…his work has changed so many lives here. pic.twitter.com/8QvnXY1KwE

John and Gabriel Shipton were invited to Mexico City by President AMLO to attend Mexico’s Independence Day celebrations. Since last week, the Mexican government and social movements have been organizing events in support of publisher Assange, with the presence of his father and brother.

On Saturday, September 10, at a cultural center in Los Pinos, they attended the premiere of the documentary Ithaka, which narrates the years-long struggle of Julian Assange’s family to attempt to secure his freedom.

On the occasion, John Shipton expressed his gratitude to the Mexican people for their support. “Julian Assange has a strong following in Mexico which starts from the grassroots activists and goes all the way to the house of the President. Mexico knows well the full wrath of the United States,” said John Shipton.

On Sunday, September 11, a day prior to the official visit of the US Secretary of State Antony Blinken, human rights and freedom of expression activists mobilized in Mexico City in support of Assange. Dozens of people part of the24F Coalición Vida y Libertad —a Mexican movement in solidarity with Assange— organized cycle marches and demonstrations in front of the US and the UK embassies demanding an end to the persecution of Assange, as well as his immediate release.

During the rallies, John Shipton criticized the United States’ double standards on freedom of expression. He drew attention to the fact that the US officials like Blinken travel around the world claiming to defend freedom of expression, but continue to persecute and prosecute his son precisely for exercising that right. “They want to extradite him from the United Kingdom to the United States to sentence him to 175 years in prison. Julian is a world symbol of press freedom,” he said.

John Shipton also took the opportunity to thank President AMLO for his extensive support for Assange. “President Obrador has made a very significant and profound contribution to the freedom of Julian Assange in the world. He was the first sitting president of a nation who said that Julian Assange must be free. And if not, if the United States does not do it, then the Statue of Liberty must be returned to France because it is no longer appropriate for it to be in the US anymore,” he said to a Sputnik journalist.

For his part, Gabriel Shipton said that Blinken and the US should not lecture the world on free speech and press freedom, while they keep one of the best journalists in the world imprisoned. He thanked President AMLO and activists of the 24F collective for their constant support.

Likewise, Edith Cabrera, member of the 24F collective, said that “the Assange case has been extremely manipulated, it has been extremely demonized, hidden by the mass media…This is our small contribution to be able to sow a little seed in people (to encourage them) to ask questions, take interest, and investigate Assange’s case.”

Cabrera pointed out that their organization is at the forefront of keeping Assange’s cause alive in Latin America, and President López Obrador is the only current head of state to have offered asylum to Assange.

Together in one single voice Julian #Assange will defeat the empire, #FreeJulianAssange @JA_Defence @TRUMANHUMAN2020 pic.twitter.com/mGxcZwvtT4

On Tuesday, September 13, senators of the ruling MORENA party organized a seminar, “Dialogues for freedom of thought, expression and the press,” with John and Gabriel Shipton. Assange’s father and brother talked about Assange’s condition in England and the processes that have been promoted to obtain his freedom.

John Shipton said that Assange has been subjected to “cruel and malignant treatment” for more than 13 years only for having exposed the war crimes perpetrated by Washington. He stressed that “his case is a disturbing example of how justice can be trampled on in today’s world without anything happening.”

For his part, Gabriel Shipton said that calls for the charges against Julian to be dropped, as well as offers of political asylum, have been presented in various parliaments around the world. Therefore, he asked the legislators not to stop fighting for the defense of freedom of the press and the right to information.

In turn, MORENA legislators vowed to fight from the Congress for the release of journalist and activist Assange.

Assange has been fighting a political battle for over a decade against US attempts to capture him. The work done by Assange and WikiLeaks has exposed US and allied war crimes in Afghanistan and Iraq, along with several other violations of international laws.

Assange was forced to live in the Ecuadorian Embassy in London, for fear of being extradited, from June 2012 until April 2019, after being granted asylum by former progressive Ecuadorian President Rafael Correa (2007-2017). In 2019, Correa’s successor conservative Lenin Moreno, demonstrated his subservience to the US and expelled Assange from the embassy, handing him over to the UK police.

On April 11, 2019, Assange was arrested at the request of the US, and since then, has been held in London’s Belmarsh prison. For the past three years, he has been subjected to a strenuous judicial process that seeks to extradite him to the US to stand trial before a federal grand jury on a total of 18 charges, 17 of them under the Espionage Act, carrying a total maximum prison sentence of 175 years.

On June 17, UK Home Secretary Priti Patel sanctioned his extradition to the US. He appealed this extradition order on July 1, and a decision regarding this appeal is due later this month. If it does not prosper, Assange will be quickly extradited to the United States. 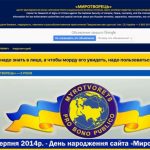 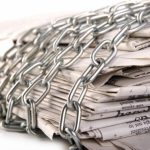