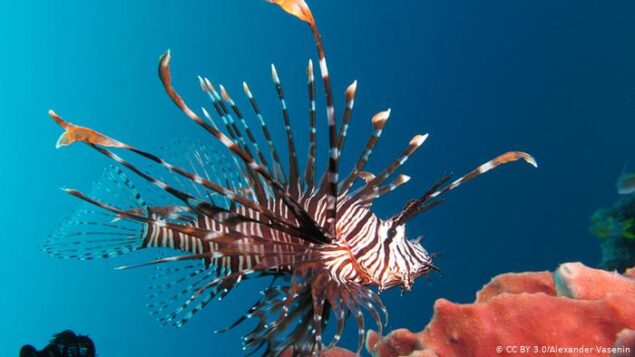 On World Ocean Day, WWF shows how climate change has already transformed – sometimes irreversibly – some of the most important marine ecosystems of the Mediterranean, with consequences for economic sectors like fisheries and tourism, and changes in our fish consumption.

Rome, Italy – Almost 1000 alien species have already migrated into the warming waters of the Mediterranean Sea and replaced endemic species, while increasingly extreme weather ravages fragile seagrass and coral beds, threatening cities and coastlines. On World Ocean Day, WWF shows how climate change has already transformed – sometimes irreversibly – some of the most important marine ecosystems of the Mediterranean, with consequences for economic sectors like fisheries and tourism, and changes in our fish consumption. Urgent action is needed to mitigate further greenhouse gas emissions and to adapt to the new reality of a warming sea.

With temperatures going up 20% faster than the global average, and sea level rises expected to exceed one meter by 2100, the Mediterranean is becoming the fastest-warming and the saltiest sea on our planet. WWF’s new report: “The Climate Change Effect in the Mediterranean: Stories from an overheating sea” shows six main impacts that climate change has on all marine biodiversity and the extent of the resulting mutations in key fish species and habitats with consequent impact on local livelihoods. WWF points out the dangerous relationship between climate-driven impact and existing human pressures on marine life, such as overfishing, pollution, coastal development, and shipping that have already dramatically reduced the ecological resilience of our sea.

Giuseppe Di Carlo, Director of WWF’s Mediterranean Marine Initiative said:
“The Mediterranean of today is not the same as it used to be. Its tropicalization is well under way.  Climate change is not in the future, it is a reality of today that scientists, fishers, divers, coastal communities and tourists are already experiencing. There is a lot at stake for the economy and the benefits that the Mediterranean Sea provides. If we want to reverse the current trend,  we must reduce human pressure and build resilience. Healthy ecosystems and thriving biodiversity are our best natural defences against climate impacts.”

Changes in habitats and fish populations are occurring across the whole region. Native molluscs have declined by almost 90% in Israeli waters, invasive species like rabbit fish make up 80% of fish catches in Turkey, and southern species like barracudas and dusky groupers have become a common sight in the northern waters of Liguria. Coastal communities have started to adapt to the new reality, learning to catch and cook rabbitfish, jellyfish and other alien species as new seafood delicacies, and installing nets around beaches to keep out the jellyfish that could instead be used in the cosmetics sector.

Warmer temperatures and storms are transforming deep-sea bottoms too. Endemic Posidonia meadows, gorgonian corals and Pinna nobilis have declined across the whole region, becoming fully extinct in some areas. Losing these species would have dramatic impacts on the whole marine ecosystem as they provide vital habitats for many species, for the climate as some of them function as natural carbon sinks, and also for our economy as they often attract divers and tourists. Well-managed marine protected areas can do a lot to reduce stress on the remaining populations as much as possible.

These cases clearly show the strong nexus between climate and ocean and the need for improved marine protection to restore biodiversity and fish stocks and rebuild the resilience of our sea. On World Ocean Day, WWF is also releasing “Blueprint for a Living Planet,” which outlines four principles for integrated ocean-climate action to guide discussions going into the Convention on Biological Diversity COP15, the United Nations Framework Convention on Climate Change COP26, and the Barcelona Convention COP22 that will take place during the second half of 2021. WWF is calling on global and Mediterranean leaders to ensure that stronger biodiversity and climate actions and financial mechanisms are agreed this year.

WWF is calling for 30% of the Mediterranean to be effectively protected by 2030. There is strong scientific evidence confirming that by increasing protection in key areas of the Mediterranean, marine habitats could recover, key fish stocks could be rebuilt, and we could best fight the impact of climate change. Read more: https://www.wwfmmi.org/what_we_do/mpa/

The six main effects of climate change we identified in the Mediterranean are:

WWF MMI report: “The Climate Change Effect in the Mediterranean: Stories from an overheating sea” is available after embargo time on: www.wwfmmi.org
WWF is also releasing a new detailed paper on Ocean-Climate Policy, also available under embargo: WWF’s Blueprint for a Living Planet: Four Principles for Integrated Ocean-Climate Strategies (2021).