Eight days after the New York Times and Human Rights Watch reported (on Oct. 20) the use of cluster munitions by Ukraine armed forces or militias in Donetsk and possibly other areas of eastern Ukraine against the civilian population, Canada’s public broadcaster has reported the story. This comes in the form of an interview on the weekday evening interview program As It Happens on Oct 28. The program speaks to a representative of Human Rights Watch. Listen to the interview here, in part three of the program.

CBC News opted not to report the story on its website. Those mainstream print media in Canada which reported the story selected wire service stories that emphasized predicable denials by the Ukraine government. Alternative media in Canada gave the story a pass.

The Canadian of Ukrainian origin who is a spokesperson for the Organization for Security and Cooperation in Europe (OSCE) also denies the findings of Human Rights Watch and the New York Times. Michael Borciukiw told Germany’s Deutche Welle news service, “We have around 90 observers in eastern Ukraine. If we had encountered anything like that, we would have reported it, but that hasn’t happened. Everything we can say about ammunition and shelling is in our daily reports.”

The German news agency reports there are calls in the German government for an inquiry into the use of the weapons. Gernot Erler, Russia policy commissioner for the foreign ministry, said the German government has no information on the matter, “But Human Rights Watch is a serious organization. And the project was done in cooperation with the New York Times, which means it is not likely to have anything against the Ukrainian government. For that reason, there is a real need for an explanation. That’s why we are calling for an independent inquiry.”

Canada signed the 2008 international treaty banning the use of cluster munitions, but the Conservative government has declined to submit the treaty to Parliament for ratification. Ukraine and the United States are among the countries that oppose the treaty and have not signed it. 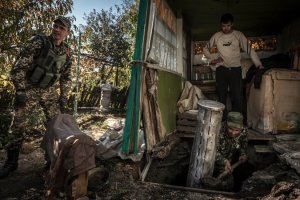